Photo: Home on Cottage Farm Road (ca. 1850) in the Cottage Farm Historic District, Brookline, MA. The Historic District was listed on the National Register of Historic Places in 1978. Photographed by User:Magicpiano (own work), 2012, [cc-by-3.0 (creativecommons.org/licenses/by/3.0)], via Wikimedia Commons, accessed July, 2014. 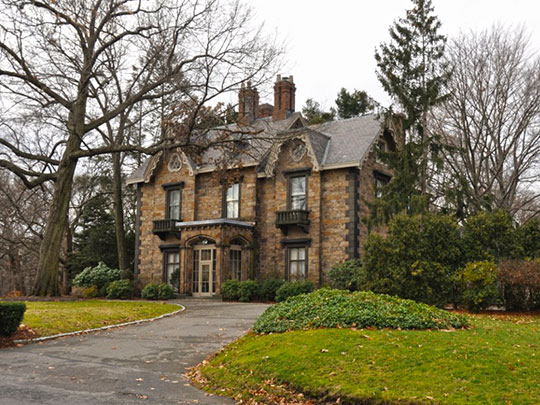 The Cottage Farm Historic District was listed on the National Register of Historic Places in 1977. Portions of the content on this web page were adapted from a copy of the original nomination document. [‡]

Cottage Farm is a suburban neighborhood of single family houses and a small number of educational and religious institutions. The common scale creates a sense of architectural harmony. Brick, stone, shingles and stucco are the prominent building materials. Major architectural styles are Gothic Revival, Mansard, Queen Anne and Georgian Revival with a sampling of Shingle Style, Italianate and Spanish Mission style. The character of the district has been maintained through 100 years of major construction in the area, adding to its unique and unified appearance.

The neighborhood, set in close proximity to downtown Boston, became known as Cottage Farm because of the number of Gothic Revival "cottages" that were built there.

In the 17th century the present town of Brookline was a tiny hamlet known as Muddy River, named for the small stream that flowed along the course of the present Olmstead Park system. Between the Muddy River and the Charles River, in the area later to be known as Longwood and Cottage Farm, were the meadow lands of Judge Samuel Sewall, Chief Justice of the Superior Court of Massachusetts, best known for his role in the Salem witchcraft trials of 1692.

Cottage Farm developed as a suburban community with the growth of Boston and the opening of the Boston-Worcester Railroad in the 19th century. The man primarily responsible for this development was Amos A. Lawrence, businessman, philanthropist and community patriarch.

A wealthy second-generation Bostonian, Amos Lawrence provided much of the capital and enthusiasm for the growth of the cotton industry in America prior to the Civil War. Lawrence's involvement in the industry aided the development of the mill towns of Lowell and Lawrence. Lawrence's support in the Kansas Free State struggle of the 1850s, and his contributions to a Wisconsin institution brought about the names Lawrence, Kansas and Lawrence University in Wisconsin.

In 1850 Lawrence purchased 200 acres from David Sears, developer of Longwood and moved his family from Boston to Brookline. The attraction of the suburbs had begun to lure the American out of his newly created urban centers. Amos and his brother William soon began to subdivide and build up the Cottage Farm area. All were designed in the new and fashionable "Gothic cottage" style popularized by Andrew Jackson Downing. Most of the Lawrence houses remained in the family throughout the 19th century.

In addition to the Lawrences and the architect George Minot Dexter, the Amory family was also associated with Cottage Farm. The home of James Amory, a friend and business associate of Lawrence, stood in what is now Amory Playground.

A station of the Boston-Worcester Railroad, formerly at the foot of Essex Street, provided easy access to Cottage Farm from Boston and growth of the neighborhood brought numerous Boston professionals there to live. The New England Hebrew Academy, built in 1902-1903, was owned by Frederick Perry Fish, a well-known Boston lawyer and president of the American Bell Telephone Company. The Wells-Carlin House was the residence of John Wells, judge of the Massachusetts Supreme Court.

Today the neighborhood is largely the home of professionals and businessmen prominent in the Boston/Brookline area. With its recent expansion, Boston University has purchased several houses in the Cottage Farm district. Some serve as department offices. The President's House is within the district, and the Sears-Talbot House is now [in 1977] the home of the Vice-President of Boston University.

A few private religious organizations and the Massachusetts Association for the Blind have also moved into previously-owned houses. Except for some additions such as in the New England Hebrew Academy, none of these houses has been significantly altered.