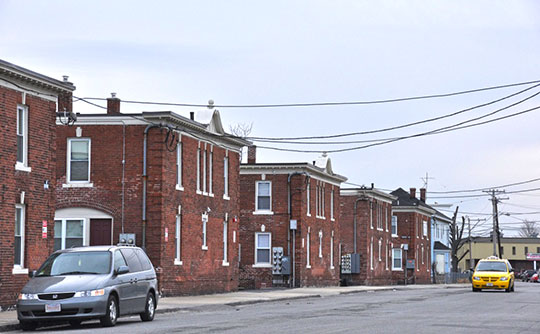 Incorporated as a city in 1853, the "idea" for the creation of Lawrence was born in the imagination of Daniel Saunders some 18 years earlier, about 1835.

Sometime previous to 1835, Mr. Saunders, then a resident of Andover, and at the time engaged in the manufacture of wool, on his own account, came by chance into the possession of an old plan for a canal from Lowell to tidewater in the Merrimack River. He was a man who never mislaid, or wasted, or destroyed anything that could by any possibility become of future use or value, unpretending but self-reliant, who though more than he talked, and who was one of the very few possessed of that rare faculty of keeping their own secret without taking the world into their confidence upon every trivial matter or otherwise, or who felt necessary to cackle into existence every new idea suggesting itself ...

From occasional studies of the plan and from the numerous sites for locking, as thereon portrayed, he was persuaded that there must be a more considerable fall between Lowell and tidewater in the Merrimack River than was generally conceived, and this seemed somewhat plausible from the fact that the river between those 2 points was navigable downward by rafts, and exhibited at no one place any decided fall, but showed the descent of the water, such as it was, by occasional rapids, up which a boat might be pushed without difficulty in ordinary height of water, and consequently was to an ordinary observer, extremely deceptive as to its actual capacity for power. In order to satisfy himself of the fact, with a single assistant, and with no other instruments than a straight edge and spirit level, he determined the fall of the several rapids between the 2 points, with an approximate certainty, sufficiently accurate at any rate for his satisfaction, and thereupon was prefigured clear and distinct beyond question in his mind, all the capabilities and advantages of this mighty source of power and wealth, hidden under the unassuming form of a few deceptive rapids. The Genie of the Stream had been evoked from beneath the waters and had been compelled to exhibit himself in all the terrible majesty of his awful power, but not as yet he subject further to mortal incarnation.

From that moment with Mr. Saunders it was only a question of time, only awaiting an opportunity, and the man to demonstrate and develop it; nor did he hesitate to talk over in the privacy of his family circle, the probabilities of the growth of a great city on the banks of the Merrimack in Methuen and Andover; whether or not his eyes should ever see it was to him then a matter of doubt, but to the vision of his children if spared, prophesied, with a certainty that silenced objection, all that the present has effected in the way of material growth and prosperity in the City of Lawrence.