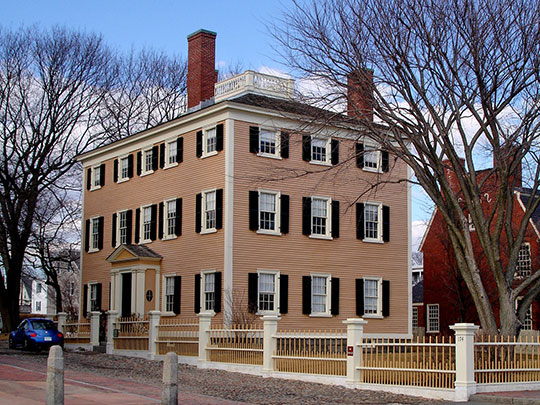 Essex County was designated by the U.S. Congress as a "National Heritage Area" in 1996. It is one of 26 congressionally-designated areas across the U.S. Within the heritage area there are more than 400 properties and districts that have been listed on the National Register of Historic Places.

The history of Essex County in the early period of formation is, in reality, the history of the founding of the Massachusetts Bay Colony.

The successive governmental steps taken within this small section in the northeastern corner of the old Bay State resulted in the formation of a well-organized government, which was delivered by Governor John Endicott to Governor John Winthrop in 1630. The area of government had rapidly expanded within seven years from an insignificant and unsuccessful fishing station at Cape Ann to a territory covering the whole of the present Essex County and Suffolk County and a generous section of what is now included in Norfolk County. The description of the boundaries of the territory purchased by the "Company of the Massachusetts Bay in New England" defines its extent as follows: "That part of New England three miles north of the Merrimack and three miles south of the Charles River, in the bottom of Massachusetts Bay."

The promontories and indentations of the Essex County coast were visited and described by the very earliest explorers. The first white men to visit these shores were the Norsemen, who came about the year 1000. Sebastian Cabot visited the coast in 1498, exploring from Labrador to the region of Delaware Bay. He claimed possession for England. The fact that England's claim was based upon Cabot's discovery was recognized in the charter which Queen Elizabeth bestowed on Sir Humphrey Gilbert in 1583, and in accordance with which he took possession of Newfoundland. Many English vessels visited the coast for fish during the last half of the sixteenth century.