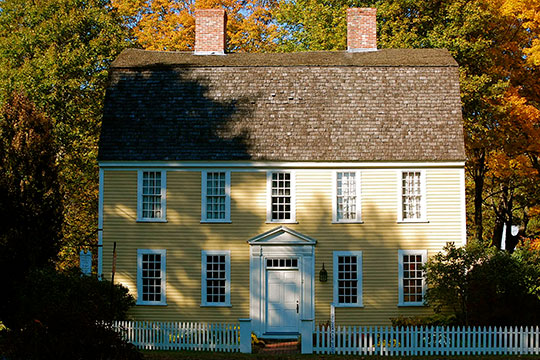 At the time of European settlement in the 17th century, the territory of much of the North Shore, including present day Boxford, was in the domain of Masconomo, Sagamore of the Agawams. The Agawams were a sub-tribe, probably of the Pawtucket or Massachuset Tribe. Seasonal encampments were established along the coast and near fresh water, such as the Ipswich and Parker Rivers. The Agawam population was depleted by inter-tribal war and by European-borne diseases. Masconomo sought the protection of the Commonwealth and eventually deeded the rights to his domain to John Winthrop Jr. in 1633 for 20 pounds, thus initiating permanent English settlement north of Salem.

The influx of new English immigrants in the 1630s-1640s, competitive farming practices and the breaking up of large inland land-grants led to the settlement of what was then the western portion of Rowley, between 1645-1650. Known as Rowley Village and set on a plain north of the "fishing brook", the town had six initial land grants of 30-60 acres each. The house lots were fairly spread out around central common land. Two thoroughfares were laid out circa 1650-1660: one path leading from the Topsfield meeting house roughly parallel to the Fish Brook (Topsfield Rd./Main St.), and the second path perpendicular to the first, running to common land. Two other county thoroughfares were built that connected Andover with Ipswich and Newbury. Neither of these roads accessed the village center but contributed to increased settlement in the western portion of the village. Agriculture and animal husbandry were the main occupations of town residents.

To establish their own minister, the villagers petitioned the General Court and were granted township, choosing the name Boxford on August 12, 1685. However, it would take another seventeen years before they would actually hire a minister or decide on a location for the meeting house. The original bounds of Boxford then contained portions of the present towns of Middleton, Georgetown and Groveland. The deed to the town was settled amongst Masconomo's three grandsons in 1701, in exchange for "silver, rum and vittles enuf."

By the mid-19th century the amount of land under use for agricultural purposes had peaked. Many families whose main occupation had been agriculture, now supplemented income with low-scale manufactories and had begun to realize modest wealth associated with nearby urban markets and the maritime trade. Rail service, introduced in 1854, facilitated shipment of marketable goods and the movement of people. This was an enticement to city dwellers to summer here. Eventually, as the amount of agricultural land declined toward the late 19th-early 20th century, other methods were employed to maintain the farm: dairying, fodder production, domestic livestock and broods. Specialized crops and truck farming became common. The population sought opportunity elsewhere and dropped from its 1860 high of 1020 to a 1925 low of 581. Much of the landscape reverted from open fields and pastures back to woods.

Up until the period around 1945, not much had changed in the overall agricultural traditions or the quiet rural atmosphere that had been such a prevalent feature of Boxford since early settlement. Farms that did remain were often larger, centralized operations that had specialized functions and did their best to remain economically competitive and financially solvent.

Then came the highway. According to the town's 2007 Master Plan, the opening of Interstate 95 in the 1950s accelerated Boxford's transition to a residential community whose residents work outside of the town and are not reliant on farming. Boxford's close proximity to Boston, high quality schools, and peaceful rural character fueled the increasing value of land to the point where it was far more attractive for landowners to develop their properties than use them for farming. By mid 1995, Boxford had experienced a rapid increase in the number of homes being built and the town began a process of acquiring land for open space to curtail development and protect agriculture and natural resources. The increased population also prompted the need to expand municipal facilities. From 1995 to 2007, Boxford built a new police station, a new town hall, upgraded the fire stations, improved its roads, and expanded its schools and athletic fields. From 2007 to present, Boxford renovated Lincoln Hall, purchased an adjacent property for a parking lot, and small picnic area, and the West Village Improvement Society constructed a gazebo on town land in the West Boxford Village. From 1995 to present, Boxford has purchased a significant amount of land for open space, including a small portion for recreation and community housing.