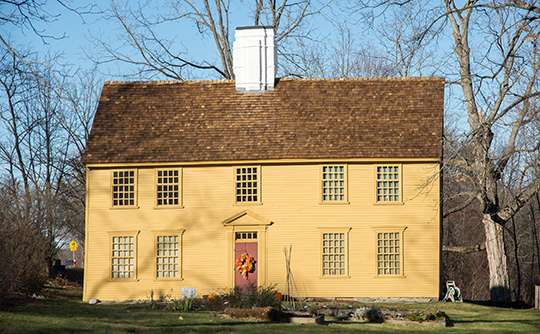 The history of North Andover [‡] is not atypical of the rich heritage found in many early Massachusetts towns. Andover, once the largest town in the state, was settled in the 1640s in an area near today's Court Street and Academy Road. By 1709 enough residents had moved to the southern part of town to create a separate South Parish. The meeting house (not far from the old burying ground) remained the town's political center. Development nearby consisted of a few houses and some craftsmen's shops, but the economy was still agrarian.

The Old Center represented the crossroads for travel throughout the region, including roads to Salem, Newbury, Haverill and Billerica. Throughout the 19th century, residential, agricultural and commercial enterprises continued to build up around the crossroads. The 1829 Brick Store, Warren Stevens' store (now the Hay Scales) and the small Hay Scales Building arc remnants of the area's historic commercial development.

Wealthy residents of the 18th and 19th centuries also built large estates in the area. including the Phillips Mansion, Kittredge Mansion and the Captain Nathaniel Stevens House, which are still extant today. Many early estate residences have been preserved and continue to be maintained by the North Andover Historical Society and the Trustees of Reservations.