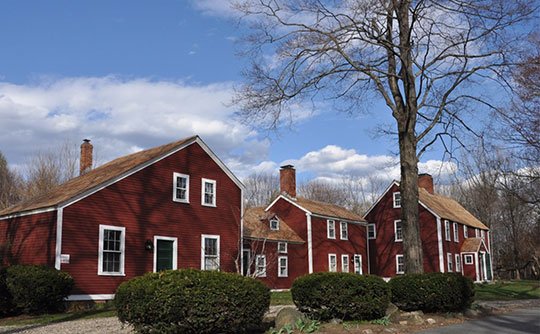 Peabody comprises a part of the territory originally belonging to the old town of Salem. Its boundaries are nearly the same as old Middle Parish of Salem, set off in 1710, and continued a part of Salem until the incorporation of Danvers in 1752. In 1855 it was separated from Danvers, and the name Peabody was taken in 1868. Its history prior to 1710 is, essentially, the history of Salem.

By 1633 there were a few settlers here. Before 1635 Captain William Trask, ancestor of all the numerous New England Trask family, received a grant of about 50 acres of land at the head of North River, near the present public square of Peabody. Here he erected his first grist mill. Originally, the mill pond was of considerable extent, and remained in use for some mechanical purposes until about 1860, when it was filled up and a street laid out across it. Near the mill and its immediate surrounding a small village was started. Here, in 1637, Richard Adams had a grant of five acres, and William Hathorne was give a 10 acre lot near the mill at about the same date. Thomas Goldthwaite also settled in this neighborhood at a very early date.

Captain William Trask was a prominent military leader, and on account of his services in the Pequot War in 1636-1637 he was rewarded with more grants. He helped survey and lay out the lots in the town of Salem and vicinity.

About 1640, Trask built another mill a half mile down stream for the first, near the present Grove Street, and soon afterward he moved it; later it was known as Frye's mills. This mill also became the middle of a settlement.

Other pioneer settlers included the following: Colonel Thomas Reed in 1636 claimed 300 acres, including Buxton Hill. Robert Cole and heirs finally held a large tract upon North Brook. John Thorndike was in the northwestern part of the town, but later left there and became a resident of Salem village. In 1652 Robert Goodell had a farm of 500 acres. William King had a tract of 40 acres in the northern part of Peabody which he took in 1636. In October, 1637, a tract of 100 acres was given to Edmund Gatter; he also had 12 acres more in a fine pasture tract. He was a prominent man in his day in this part of Essex County.

Peabody took its name from the great philanthropist George Peabody, and was made a city in January, 1917. The 1920 census had the population of Peabody at 19,552.

George Peabody was a world-wide benefactor. He was born in South Danvers (now Peabody) in the house which still stands at 205 Washington Street. (This house was listed on the National Register of Historic Places in 1988.) He left his native town when young and embarked on business in Baltimore. He later located in England where he became one of the world's largest bankers. He gave away millions for charity, and did not forget his native town and its offspring, for two libraries endowed with sufficient money to maintain them were given to Danvers and Peabody.