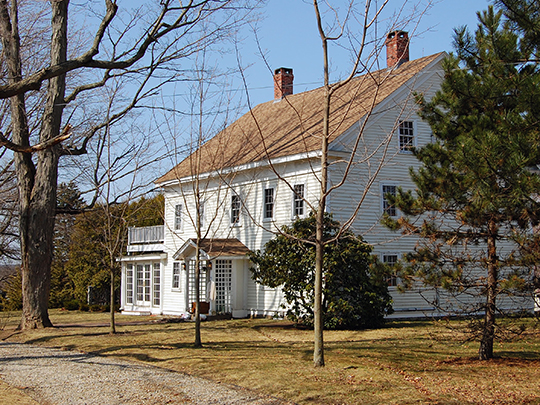 Settlers came to Danvers from Salem in search of farm lands and the place was first called Salem Village. In 1688, Cotton Mather hastened to Danvers to attend a witchcraft trial. He preached a sermon which so inflamed the villagers that in 1692, when 10 young girls accused a Negro nurse, Danvers became the center of witchcraft hysteria that caused 200 arrests and 20 deaths before public sanity was restored.

Seventeen emigrants from Danvers joined the covered wagon caravan to Marietta, Ohio, in 1787. About this time Zerubbabel Porter, a tanner, wishing to dispose of surplus leather, developed a commercial shoe factory. In 1833 Samuel Nathan Reed made a machine for cutting nails, and in 1843 Gilbert Tapley started the manufacture of carpets. Two panics, a severe fire in 1845, and the Civil War caused an industrial decline.

In the Town Hall are Murals, done as part of a Federal project under the Emergency Relief Administration, depicting episodes in the town's history.

A boulder on the lawn of the Danvers Saving Bank at the edge of Danvers Square marks the Site of the Encampment of Arnold's Forces on their march to Quebec in 1775.