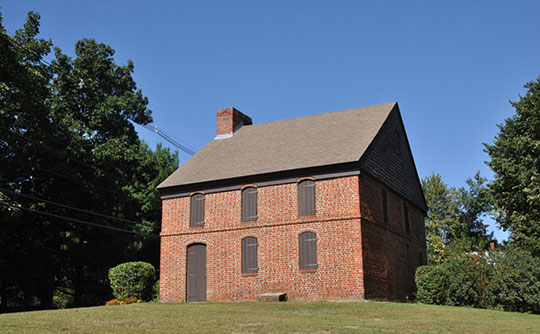 At Haverhill's back door flows the Merrimack. New houses shoulder weathered old ones along the wide streets, and from the Haverhill bridge there unfolds upstream a panorama of factories, office buildings, and spires, while downstream lies the long, lovely perspective of rounded hills, neat farms, and broad river of an unchanged New England.

Certainly the Reverend John Ward and his twelve followers could never have envisioned more than an eventual approximation of the quiet market town of Haverhill, England, when they landed on the muddy Merrimack shore in 1640 to found a new plantation. The swift wide waters of the river were too powerful for them to harness, but they early saw modest possibilities in the rapid small streams rushing down from the hills, and they offered grants of land and other inducements to such applicants as would put them to use.

During the first century of its existence Haverhill was a frontier town cut off by the Merrimack from the more secure settlements of the coast. The settlers clearing their fields had no Indian troubles until King Philip's War in 1675, and their frontier position had many advantages. The soil of the glacial hillsides was fertile. The forests provided oak and pine timber, and the wilderness trails became the avenues for a profitable trade in skins and furs. The oaks and pines provided frames and planking for the ships which were building all along the Merrimack. The first vessel was launched from a Haverhill yard in 1697, and for nearly one hundred and fifty years the town's merchants sent their goods adventuring in their own ships. The pelts purchased from the Indians were cured in the tanneries which had flourished from 1643, and which are still a feature of the town's industrial life.

The making of hats, recorded as early as 1747, was an important industry in Haverhill throughout the last century, and continues at present on a diminished scale.

The mercantile boom that swept the cities of the Massachusetts coast to prosperity during the Federalist period gave impetus to Haverhill shipbuilding. Four shipyards in 1800 were turning out ships, schooners, and sloops; sometimes three were launched in a single day. Trade with the South and with the West Indies flourished. Haverhill's position as a port of entry, however, was gradually surrendered to Newburyport and other coastal cities. The larger vessels which gained favor after the Revolution were not suited to river navigation, and this was made even more difficult when a group of Newburyport merchants built the Chain Bridge across the Merrimack in 1811. Haverhill merchants turned manufacturers and invested their profits in shoe factories, hat factories, comb factories, and tanneries. In 1836 there were twenty-eight shoe factories in Haverhill.

The invention of the Goodyear turn shoe-stitching machine, patented in 1875, assured Haverhill's position as a manufacturing center of high-grade shoes. Later the local manufacturers specialized in fashionable shoes for women. As a center of shoe manufacture and allied industries, Haverhill was outdistanced only by Brockton among Massachusetts cities in 1934. Other manufactures are boxes and paper, woolens, food products, brooms, chemicals, shirts, mattresses, hats, cigars, and radio cabinets.

Haverhill, like the other Massachusetts shoe cities, Lynn and Brockton, is a center of unionism. For the student, trade-union structure and operation is vividly depicted in the activities of the Shoe Workers Protective Union in Haverhill from 1900 to 1930. Thomas Norton in his Trade Union Policies in the Massachusetts Shoe Industry analyzes this union and its arbitration technique. Other strong unions in the city are the Boot and Shoe Workers' Union of the American Federation of Labor, the Brotherhood of Shoe and Allied Craftsmen and the United Shoe and Leather Workers' Union, the last two independent. Recently there has been a movement to amalgamate all these groups.

The city in 1937 was definitely divided into foreign quarters, whose residents are more or less segregated and intermingle with those from other quarters only during the working day at the factories. Along the Methuen highway, Polish immigrants till their small farms. Between the end of this highway and the western side of the city, the Latin immigrants have built a little Italy. The Jewish quarter, complete with markets, clubs, and synagogues, borders both sides of Washington Street near the junction of River Street. The homes and societies of the French-Canadians dominate Lafayette Square. In the section between Washington Square, Essex, Emerson, and Winter Streets are the places of business, the coffee houses, and the homes of the Syrians and Armenians. From Winter Street to the northern outskirts of the city is the 'Acre,' as the Irish section of Haverhill has long been called. From Monument Square toward the northeast extends that part of the city inhabited by families who took root in Haverhill soil before the industrial era.

Haverhill is one of the few cities in the east with a commission form of government. Such a system is built on the theory that the modern city is essentially a great business enterprise and should be administered by the same methods which would be regarded as efficient by any successful commercial corporation.