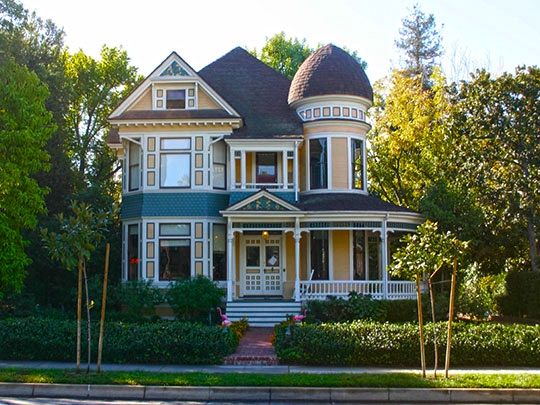 The Markham Place Historic District was listed on the National Register of Historic Places in 2013. Portions of the content of this web page were adapted from a copy of the original nomination document. [‡]

The Markham Place Historic District is one of the largest concentrations of houses from the period south of the Foothill Freeway. Thirty-two of the buildings in the district were constructed between 1887 and 1904. The district is significant because it contains an important collection of houses constructed between 1895 and 1918 including Shingle Style and American Colonial Revival.

The City of Pasadena began as the Indiana Colony of California, which was organized by a group of settlers from Indianapolis, Indiana, and headed by Dr. Thomas Elliot. His wife was in ailing health and wanted to settle amidst the warm, dry weather and sunshine of Southern California. A scout was sent ahead to look for a suitable location and settled upon land that was part of Rancho San Pascual. The land purchased from the rancho was bounded by the Arroyo Seco to the west, and what is now Wilson Avenue to the east, Mission Street to the south, and Villa Street to the north. It was divided in 1874 among twenty-seven shareholders of the newly created San Gabriel Orange Grove Association, organized the previous year. Among the shareholders were W.T. Clapp of Massachusetts, H.J. Holmes of Michigan, and Henry G. Bennett of Michigan, whose tracts would form the neighborhood that is now the Markham Place Historic District. The Clapp Tract had boundaries of Congress Place on the south and California Boulevard on the north. The Holmes Tract included both sides of Markham Place and Bradford Street, just to the east of Markham Place on the other side of Orange Grove Avenue (now Boulevard). Mr. Holmes sold his tract to Pasadena developer George Woodbury Stimson, who named the tract Carlisle Heights and was responsible for the design of the layouts of Markham and Congress Places. The Bennett Tract included both sides of Bellefontaine Street. Mr. Clapp's tract was eventually sold to Josiah Gilmore and James Campbell, who laid out St. John Avenue.

The Markham Place Historic District was named for its most notable resident, Henry H. Markham, who was a United States Representative from 1885 to 1887 and Governor of California from 1891 to 1895. People were attracted to the neighborhood by the residence of Governor Markham and the promotional efforts of the Board of Trade at the turn of the 20th century. The Markham Place Historic District contains intact examples of late 19th and early 20th century domestic architecture built between 1887 and 1904, including Folk Victorian, Queen Anne, American Foursquare, American Colonial Revival, and Neoclassical subtypes of the Single Family Residence property type.

The earliest houses in the district were designed and constructed by the city's first architects and builders including Harry Ridgway, Charles W. Buchanan, George Woodbury Stimson, Frederick L. Roehrig, Seymour Locke, Louis Kwiatkowski, and Joseph J. Blick. The oldest house in the district was constructed in 1887 for Joseph Campbell. Located at 659 S. St. John Avenue, it was designed by Harry Ridgway in the Mission Revival style. In 1878, Ridgeway became the first architect to open an office in Pasadena. He designed and built several hundred residences, nearly all of Pasadena's public school buildings, and several churches. Ridgway designed two other houses in the district, 337 Markham Place and 651 S. St. John Avenue.

George Woodbury Stimson played an important role in the history of the district. He moved to Pasadena in 1885 and began a career in real estate development. He subdivided the Carlisle Heights Tract, which includes Markham and Congress Places. In addition to building custom homes, such as the ones at 311 and 348 Congress Place, he engaged in speculative building in the 1910s and 1920s. Many of these homes were designed by his son, George Lawrence, who joined his father's firm in 1905.

The contributing buildings illustrate the quality, range of styles, and distinctive characteristics of Pasadena's architecture from the Arts and Crafts movement. The district includes one example of the work of Greene and Greene, the brothers and architects most closely associated with the Arts and Crafts movement in Pasadena, however, it predates their designs in the Craftsman style. Constructed in 1898, the house at 310 Bellefontaine Street is an eclectic design influenced by several styles including American Colonial Revival and Queen Anne.

There are several outstanding examples of the Shingle Style in the district including 268 and 325 Bellefontaine, 271 Markham Place, 252 Congress Place, and 628 S. St. John Avenue. While the Shingle Style emerged during the Late Victorian period of architecture, it had a formative effect on the Arts and Crafts period house. The free-flowing plans and use of stained wood shingles lent an air of informality to the style that was appreciated by the architects of the Arts and Crafts movement.

Domestic English architecture was a source of inspiration for the American Arts and Crafts movement. Tudor Revival and Craftsman architecture drew upon a variety of medieval prototypes ranging from thatched-roofed cottages to grand manor houses. The house at 295 Markham Place is a prime example of the influence of English architecture in Pasadena generally, and the district specifically. Designed by Myron Hunt in 1903, the house has an irregular plan covered by a steeply pitched multi-gabled roof. Three-sided bays and diamond-paned windows are also key features of the house.

Of course, classic examples of the Craftsman style are also present in the district. These include a particularly strong collection on the east side of S. St. John Avenue, along with other examples scattered throughout the district. The house at 646 S. St. John Avenue is part of that grouping. It was designed in 1905 by the architectural partnership of Hunt and Eager. A dominant feature of the house is the asymmetrical gabled roof and exposed structural members. 310 Congress Place is an example of the Swiss Chalet subtype of the Craftsman style. Constructed in 1913, it has a single rectangular form covered by a front-facing gabled roof, decorative brackets, and a full-length front porch.