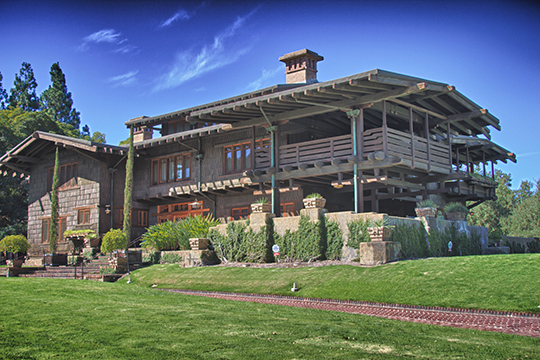 The David Berry Gamble House was listed on the National Register of Historic Places in 1971. Portions of the content of this web page were adapted from a copy of the original nomination document. [‡]

The David Berry Gamble House (also known as the Gamble House Greene and Green Library) is placed on a landscaped site approximately 240 feet by 240 feet facing East. The address is 4 Westmoreland Place, Pasadena, CA. The original contract for construction was $50,400, the adjacent garage for $3,500, the contractor was Peter Hall.

The three-story wooden frame structure is covered with shingle siding (36" cedar shakes dipped in Cabot's Creosote base stain, painted olive green). The walls are shaded by long, overhanging eaves with exposed rafter construction under an overlapping gable roof with integrally designed gutter and rolled edge, the roof is Malthoid. Framing is heavy timber post and beam with an occasional wood truss. Foundations are of brick and gunite and three brick chimneys have cast concrete caps with gunite finish.

The Gamble House is the finest surviving example of the work of Greene and Greene and is one of the outstanding examples of the California Bungalow style. It is also one of the nation's finest representations of the American Craftsman Movement. The house was commissioned as a summer house by David Gamble of the Proctor and Gamble soap company in Cincinnati, Ohio.

As leading exponents of the Arts and Crafts Movement, the Greene brothers played a leading role in establishing southern California, (notably Pasadena), as a center for this new direction in American architecture. Contemporary with Frank Lloyd Wright, their finest houses done before World War I, were created when Wright was building his "Prairie Houses." Both the Greene brothers and Wright reacted to the lack of order in the cluttered Victorian interiors of the late 19th century and although there is a faint historicism in their work, it was a far cry from what Grant Manson called the Age of the Aspidistra with its pack rat interior.

In spite of the deep interest in Japan, generated probably by the Japanese Pavilion (Ho-o-den) at the Chicago World's Columbian Exposition in 1893, neither of the Greenes visited the Orient, unlike F. L. Wright. This may account for the refinement and personal quality in their work. It should also be noted that Greene papers contain references to Gustave Stickley's articles in The Craftsman (1901-1903), and the series Will Bradley wrote for The Ladies Home Journal in 1901 which showed furniture designed by the architect for his own structures. Stickley in his New York State studios had established an artisans guild that was similar to William Morris' own enterprise in England. In 1903, articles appeared in The Craftsman by Harvey Ellis—which may have directly influenced the brothers in developing the theories that the house and its interiors are one and the site and landscape are also part of a total ensemble. By 1903, a vocabulary appeared: cobble stone foundations, open courtyards, broad gabled roofs, timber work with joints fastened with wooden pegs, or metal straps with oak wedges, sleeping porches open to the air, horizontal casement windows and massive front doors with decorative Tiffany panels. The outdoor walks, fences and lanterns were carefully designed.