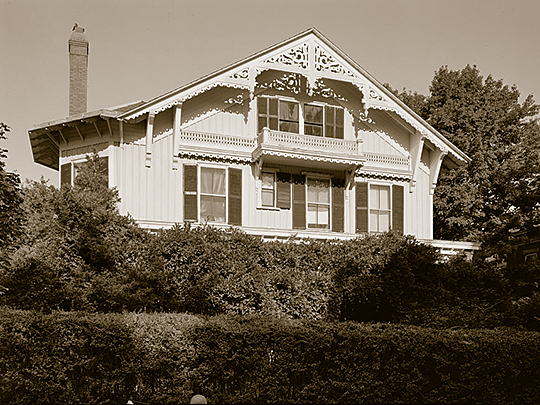 Swiss Chalet, or Swiss Cottage, architecture in America is widely attributed to Andrew Jackson Downing, who featured a Swiss Chalet style in his various house design books. Downing's model was the native Alpine dwelling of Switzerland that featured not only intricate and colorful decoration, but also a shared use, housing the family above and the livestock below. In his 1850 book, The Architecture of Country Houses, Downing stressed that the selection of a site for the American Swiss Cottage was critical. The spirit of the house required a bold, mountainous site, if possible on the side or bottom of a heavily wooded hill, or in a wild picturesque valley, although Downing did not expect his American readers to share their homes with cattle. The Swiss Chalet style also appeared at the Exposition Universelle de Paris in 1867. A notable urban version of the style is located at 3627 Carondelet Street in New Orleans. Listed in the National Register as the Bullitt-Longenecker House, it was built in 1868, and inspired by the Exposition. These early forms were only mildly popular from roughly 1850 to about 1870, when the various Victorian styles superseded those of the Romantic period.

The Swiss Chalet appeared again around the turn of the twentieth century as a variant of Craftsman architecture. The primary structure type of the Craftsman period was the bungalow, which flourished in America, and particularly the West, from about 1900 through the mid-1930s. A popular 1920s book on bungalows identified nine types: the community bungalow of Southern California, the patio bungalow, the portable bungalow, the retreat or summer house, the Adirondack lodge (built of logs), the New England seacoast bungalow, the Chicago, a type of house that is not a bungalow yet built along bungalow lines, and the Swiss Chalet type. There are but a few buildings listed in the National Register of Historic Places that are classified as Swiss Chalets. A significant percentage of these are related to mountain resorts (Montana has 10), while others fall under the greater bungalow classification.

Craftsman architecture was a part of the greater Arts and Crafts Movement that venerated the spirit of craftsmanship and embraced a "back-to-nature" ethic. The Swiss Chalet, both from the standpoint of its rugged roots and its hand-crafted detailing, was well suited for inclusion in the Craftsman palette. The Swiss Chalet as a subset of the Craftsman style was particularly well employed by practitioners in the San Francisco Bay Area. Architects of what came to be called the First Bay Tradition included several prominent, classically-trained individuals, including Ernest Coxhead, John Hudson Thomas, John Galen Howard, Julia Morgan, and Bernard Maybeck. Plying their trade, as they did, in the hills above the University of California in Berkeley, these designers left a legacy for all who followed. John Galen Howard, the founder of the School of Architecture at the University (1903), known as a master of Beaux Arts Classical Revival designs, embraced the Brown Shingle mode that had been introduced to the area by Englishman Ernest Coxhead. Also affiliated with the Berkeley architecture school was Bernard Maybeck, who designed several Swiss Chalet homes in the Berkeley hills.

Maybeck was influenced by German medieval vernacular buildings, so it is understandable that he would incorporate European designs into his Craftsman buildings that were sited in rugged hillside settings. His earliest Swiss Chalet bungalow, the Flagg House, dates to 1901. It was followed in 1902, by the Boke House, in 1906, by the Hopps House (in rural Marin County, California), and the Schneider House in 1907. Maybeck lectured at the Berkeley architecture school, and was in a position to influence a number of students studying there at the time. Several notable graduates of that period (who studied under the supervision of John Galen Howard), including John Hudson Thomas, William Raymond Yelland, and Henry Gutterson, designed local buildings based on rural European models. Anyone studying at the university or living in the East Bay at that time would have been familiar with the influences of the First Bay Tradition.