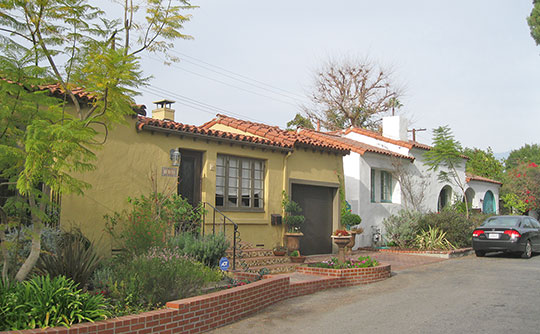 The Marguerita Lane Historic District was listed on the National Register of Historic Places in 2009. Portions of the content of this web page were adapted from a copy of the original nomination document. [‡]

Marguerita Lane is a narrow private street in the southern part of the Pasadena off South Marengo Avenue. It is a dead-end street running in a basically east-west direction lined with a variety of trees. The district boundaries comprise all of the properties located on the cul de sac. The subdivision was conceived as an artists' colony, and all of the lots were developed in two-year period of time between 1927 and 1930. The sixteen houses in the district are similar in style, scale, and materials, but unique in design. The houses are primarily one-story in height, and all are Spanish Colonial Revival in style. Common features are wood-framed structures, stuccoed walls, multi-paned casement windows, and roofs covered with red clay tiles. The houses are all relatively small (ranging in size from 900 to 1,500 square feet) even though they occupy a high percentage of their lots, which are approximately 75 x 60 square feet including the private street. Detached one-car garages and patios cover the remainder of most lots. The edge of the lane has a variety of features, including privacy walls, tall hedges, and small planter strips. The asphalt street has no streetlights, curbs, gutters, or sidewalks alongside it. The district has a strong consistency in character and retains a high level of physical integrity. All but one of the houses are contributing to the district, as they were constructed during the period of significance and retain their physical integrity.

Marguerita Lane is an excellent collection of small-scale Spanish Colonial Revival single-family houses. While there are many distinguished examples of Spanish Colonial Revival style houses in Pasadena, the district is unique in that it was developed as a unified tract of houses in similar styles and on relatively small lots. Virtually unchanged since it was developed between 1927 and 1930, the district retains a high level of physical integrity.

Many scholars attribute the rise of the Spanish Colonial Revival style to the Panama-California Exposition in 1915. Bertram Goodhue (1869-1924) was the principal architect of the exposition. The style he chose was an adaptation of the ecclesiastical architecture of 18th century Spain. Now referred to as Churrigueresque, the style was named after a family of Spanish architects and sculptors who applied elaborate ornamentation to the Spanish Baroque.

The Marguerita Lane Historic District was planned in 1927 by Dr. Alexander Schutt as a private street of artist studios which he called "studio houses." Very few artists, in fact, occupied the houses. The City Directories document that individuals representing a wide variety of occupations lived in the houses. Dr. Schutt briefly lived in the house at 284.

Building permit records document that fourteen of the houses were designed by either Denman Schutt or the Schutt Brothers, and in some cases they functioned as the contractor as well. Denman and Burton Schutt, the Schutt Brothers, were born in Racine, Wisconsin and received their earlier education in Bismark, North Dakota and Pasadena, California. Their father, Dr. Alexander Schutt appears to have developed Marguerita Lane as a way of advancing his son's careers as architects and builders. However, Marguerita Lane is the only known work of the Schutt Brothers. There after, they worked independently or under the name Schutt and Scott. Denman opened an architecture office in 1927, while Burton opened his own office in 1930, after working briefly in Hawaii. Their only work listed in the National Register, is the De Golyer House and Gardens in Texas, which is now the Dallas Arboretum. It was designed under the name, Schutt and Scott for oilman Everett De Golyer 1939. By this time, Denman had changed his surname Scott. Their other major work as a team was a residence for Patricia Detring in Bel-Air, California in 1942. Both died relatively young, Denman died in 1948 while Burton died in 1954. Arguably, Burton had a much more successful career than Denman. His work was widely published in newspapers and architectural journals of the day. He designed numerous residential and commercial buildings, mostly in the communities of Bel-Air and Beverly Hills. He is best known for designing the Bel-Air Hotel in 1945.

Because of the small scale of the houses in the district, it appears as though the designers decided to focus on one or two elements of Spanish Colonial Revival architecture rather than trying to include as many details as possible in each house. Thus, the district collective illustrates the character defining features of the style.

Some of the most interesting design features were introduced in the first houses in the district. On the north side of the street, the recess of the windows grows consistently deeper from 225 to 245 (west to east), showing an overall design plan for the district. The "birdcage" balcony at 234 is an eye-catching feature visible from the entrance to the street, and the plaster scroll on this house's entry wing wall is a surprising feature that only meets the eye after a careful look at this house. One of the other early houses on the block, 254, features an asymmetrical gabled roof that is a rare form for its time.

Every house in the district is sufficiently intact to contribute to the character of the district except for one. Four detached garages are also contributors, while three are non-contributing. The other garages, however, are attached to the houses either directly or by breezeways and are considered part of the main building.

Most neighborhoods in Pasadena developed during the 1920s and/or 1930s reflect a variety of Period Revival styles that might include Italian Renaissance, Monterey, Tudor, as well as the Spanish Colonial. The Marguerita Lane Historic District is unique in that it is one of the few concentrations of Spanish Colonial Revival style houses on a single street. This can be attributed to the fact that it was developed as a tract by an individual, Dr. Alexander Schutt, with a singular vision. There are only two comparable developments in Pasadena, Oak Knoll Gardens and Arboleda Drive. Oak Knoll Gardens was developed by the B.O. Kendall Company between 1921 and 1922 and includes twenty-six French and American Colonial Revival style houses. Arboleda Drive was planned in 1929 by Margerete Morrow and designed by the architect Myron Radon. It consists of twelve houses and four garages.