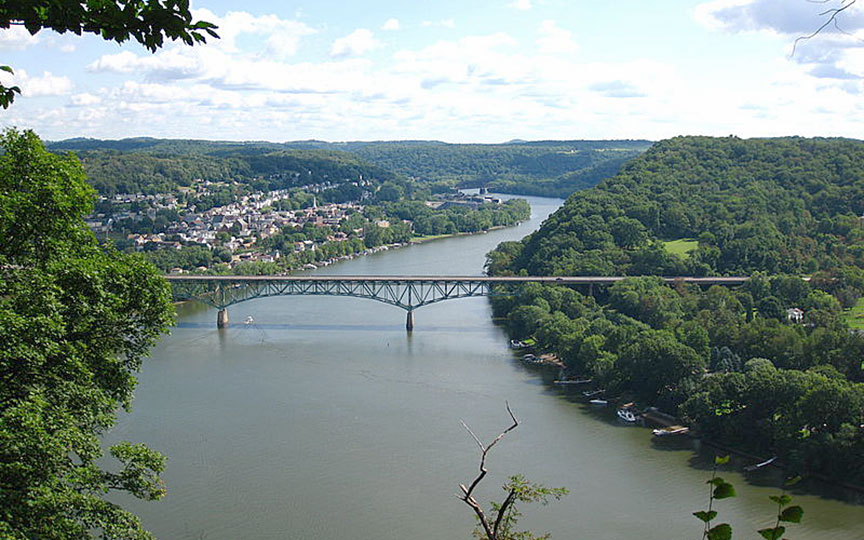 The Allegheny River [†] has its source near Coudersport in Potter County along the northern tier of Pennsylvania, flows northwest into New York for nearly 50 miles, and then turns southwest, back into Pennsylvania. It then flows about 250 miles to Pittsburgh, joining there with the Monongahela River to form the Ohio River. At its headwaters, the Allegheny flows through a broken plateau at an elevation of about 2500 feet, winding its way through rugged terrain in a well-defined valley until it reaches its mouth at Pittsburgh. The river flows through or touches ten Pennsylvania counties during its journey to become part of the Ohio: Potter, McKean, Warren, Forest, Venango, Clarion, Butler, Armstrong, Westmoreland, and Allegheny, and two New York counties, Allegany and Cattaraugus.

The area that is now Armstrong County is typical of the area through which the Allegheny River flows; many stream valleys cut through the high, heavily-timbered plateau, leaving few extensive level areas. The few flood plains that exist are unconnected and narrow (Armstrong County Historic Sites Survey, 1980, p. ii). The Allegheny, together with its principal tributaries the Clarion and Kiskiminetas Rivers, and French, Tionesta, Redbank, Mahoning, and Crooked Creeks, drains an area of about 11,778 square miles of western Pennsylvania and southern New York. The Allegheny was the major north-south transportation route in western Pennsylvania before the advent of the railroads in the mid-1850s.

In the period between 1739 and 1790, few people lived in the Allegheny River Valley. As noted above, most of the traffic before the American Revolution consisted of traders and soldiers, both European-American and Native American. With the assurance of American independence and control of the Ohio country and the elimination of the Native American threat by the mid-1790s, settlement began in earnest in the trans-Allegheny region.

The earliest settlers often claimed land along rivers and streams that could provide water power for small industrial operations, such as grist, linseed oil, fulling, and saw mills, and for transportation when water conditions were just right. Most times of the year, they continued to use the centuries-old Indian paths that ran along the ridges and valleys, sometimes enlarging them enough for use by teams and wagons. Settlers were few, and trading was normally done within a small local area since transportation was arduous. Only non-perishable resources could be shipped successfully over any distance, and specie was generally scarce on the frontier. As a result, barter and the use of whiskey as currency were common during the settlement period. The grain that was not distilled into whiskey was normally ground into flour locally.

River and stream-side mills of all kinds required minor modifications to the water sources to produce enough power to turn the wooden wheels that operated the shafts, belts, and pulleys. Mill dams and races were constructed to channel the water to the mill and store it at the proper height to produce the needed force. In an attempt to make the rivers and creeks at least somewhat passable, wing dams were built out from the shore, and logs, snags, and boulders were cleared where possible, all with local labor and private resources. Since little capital was available for river improvement, there were no extensive efforts at navigation improvements made on western Pennsylvania rivers before about 1824.

The growth rate in the United States as a whole and of the western territories in particular increased explosively during the first half of the 19th century. In the West, the numbers doubled every ten years between 1810 and 1830, and, by 1840, one-third of the entire population lived beyond the mountains (National Park Service, 1994: 74). The western cities grew along with the population, and the river ports of Pittsburgh, Cincinnati, Louisville, St. Louis, and New Orleans were important centers of commerce and industry by the time war broke out in 1860.

In its natural state the Allegheny River was difficult to navigate; channels were narrow and shoals wide; snags and boulders were common. In the winter ice closed vast stretches of the river, and in the summer low water could make it nearly impossible for boats to travel any distance. Floods often came roaring down the river making any travel at all dangerous. The Allegheny was somewhat deeper and swifter than its neighbor the Monongahela, and, overall, flooding tended to be more of a problem than low water. Three feet was considered navigable by many boatmen, but the river was rarely that high over its full length. Only shallow-draft vessels, such as canoes, rafts, flatboats, and keelboats could normally be used successfully on it in its unimproved state.

Rafts and flatboats carried the bulk of the commerce on western rivers such as the Allegheny from settlement until nearly the middle of the 19th century. They were commercially useful only on down-river journeys and were normally broken up and sold as lumber at their destination. Flatboat and raft navigation was very imprecise and depended primarily upon the vagaries of the current; rudimentary steering was done with long oars. River hazards were constant threats. Flatboats were the vessels of choice for carrying both freight and people downstream until steamboats proved reliable on western rivers.

The traffic and commercial tonnage carried on western Pennsylvania rivers was, from the beginning, heavier on the Ohio and Monongahela, and the pressure for organized river improvements occurred much earlier along those more-heavily used rivers, particularly the Monongahela. Although vessels plied the Allegheny regularly as far north as Warren, the busiest stretch was the section that runs through Allegheny County. The low population density of northern Pennsylvania and the fact that its products were primarily natural resources intended for markets in Pittsburgh and beyond meant that most of the traffic on the Allegheny was downstream.

The history of navigation improvements on the Allegheny River, then, are intertwined with the geographical, economic, political, and technological history of the region, the state, and the nation as a whole. The Allegheny River Valley experienced a slower rate of growth and development than did the neighboring western Pennsylvania areas along the Ohio and Monongahela Rivers, and that was reflected in the fact that navigation improvements of the type constructed on the other two rivers came late to the Allegheny. The U.S. Army Corps of Engineers began its active involvement in the Allegheny corridor by clearing a channel and constructing wing-dams and dikes in 1879. Between 1893 and 1903, the Corps built the historic lock and dam that initiated the Allegheny slackwater navigation system.

The technology developed as larger locks handled larger barges. Timber-crib construction for both river walls and dams gave way to concrete structures. Valves moved from gates to river walls, then into culverts built into the land and river walls. Gates became steel. Power to move heavy steel gates came from the differential in height of water. Water wheels, then turbines moved gate and valve machinery. Large steel gates were moved by electric or hydraulic systems, powered by water turbines. This technology developed in small increments, as engineers built upon previous examples.

On the Allegheny River, by 1938 there were eight permanent locks and dams in place, and traffic could move safely for seventy-two miles between the river's mouth at Pittsburgh and East Brady in northern Armstrong County. The Allegheny River navigation system has remained virtually the same for sixty years, and today it moves recreation boaters and diesel-powered tugboats pushing barges along the same stretches of river that transported the canoes, rafts, flatboats, keelboats, and steamboats of earlier days.

Towns along the Allegheny River