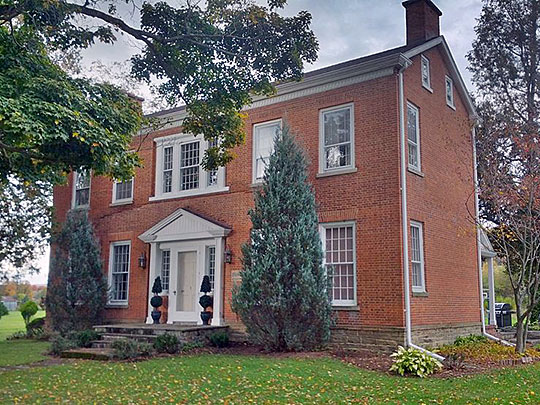 By decree of the New York State Legislature, Allegany County was formed on April 7, 1806. Prior to this event, these lands were inhabited by numerous indigenous people and, most recently, by the Seneca Indians, traditional "Keepers of the Western Door" for the Iroquois Confederacy. The Seneca had cultivated these lands for generations and had even planted orchards of many varieties. The first settler of European descent was Nathaniel Dyke, a Revolutionary War veteran who arrived in 1795. Allegany County's first great landowner was Philip Church, who acquired 100,000 acres in the Southern portion of the Morris Reserve shortly after 1800. Philip Church was not an absentee property owner; he laid out the plan for the first town in Allegany County and named it after his mother, Angelica.

Angelica was connected via the Turnpike Road to Bath, New York, and this was the conduit by which many of our early settlers arrived in the County. Others arrived via the numerous rivers and streams or simply followed the old Indian pathways. These pioneers became farmers, lumbermen, or proprietors of small businesses such as grist and saw mills as hamlets and settlements were formed. These settlers changed the face of the land in ways that the native people never contemplated. The forests were cut down to the point where our steep hillsides were denuded of their trees and massive erosion resulted. River bottomlands were cultivated and little thought was given to preserving the fertility of the soil. All this was done by people who perceived that such actions were necessary for their survival and eventual prosperity in this wilderness.

As time went by, it became apparent that the geography of Allegany County is unique. These lands sit astride the three major watersheds of the Eastern United States. The Genesee River that neatly divides the county in half traverses the county, south to north. We are essentially an eroded plateau with a few broad river valleys, numerous creeks and streams, steep hillsides, and hilly uplands. Our forests are rich in valuable hardwoods, hemlock, and numerous other varieties of trees. The rivers provide abundant fish, and the wildlife helped sustain the early pioneers and provide ample fishing and hunting opportunities in modern times.

Allegany County grew steadily in the mid 1800's. Villages and towns were formed as the population grew, and soon, numerous small industries appeared. Forestry products especially the tannin from the hemlock trees needed in the leather industry provided work and prosperity for Alleganians. Many modern day historians are of the opinion that the single most important change in Allegany County was the coming of the Erie Railroad in 1859. This opened up wider markets for our products and made it possible for people to get to their destinations much more rapidly and safely. It also allowed our citizens to obtain desirable manufactured goods from far away. The coming of the railroad even prompted the Board of Supervisors to relocate the County Seat to Belmont from its original location in Angelica, as Belmont was on the rail line and Angelica was not. As a result, Allegany County was a "two shire" county until 1895 as court cases were heard in both villages.