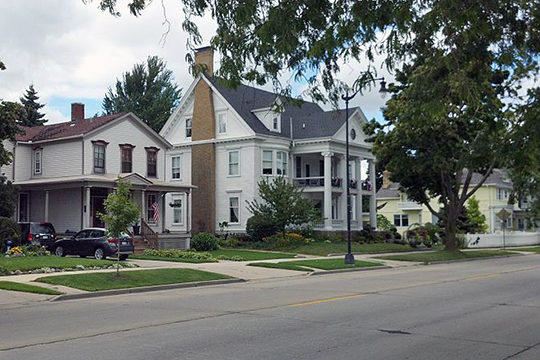 The Southside Historic District was listed on the National Register of Historic Places in 1977. Portions of the content of this web page were adapted from a copy of the original nomination document. [‡]

The historic district in Racine, which takes pride in its title "Belle City of the Lakes," has been called by Zimmermann "one of the richest concentrations of landmark buildings in the Midwest." This statement may perhaps be a bit strong, but at least in the state of Wisconsin such a concentration of well-executed Victorian houses is highly unusual. Many Victorian residential areas like the Southside district once existed, but few remain. Not only are the buildings of fine quality, they also represent nearly every domestic style of Victorian architecture, from Greek Revival (for example, the Cooley House at 1135 South Main Street), through Gothic Revival Cottage (Hall House, 1235 South Main Street), Italianate (Jones House, 1144 South Main Street), High Victorian Eclectic (Erskine House, 920 South Main Street), Stick (Harvey House, 929 S. Main), Queen Anne (Freeman House, 1242 South Main Street), Shingle (1336 S. Main), Richardsonian Romanesque (1216 South Main Street), Colonial Revival (Mitchell House, 905 South Main Street), and Neo-Classical Revival (Snoop House, 803 South Main Street), into the twentieth century Eclectic Resurgence (324 DeKoven Avenue) and Prairie School styles (Hardy House, South Main Street). Besides outstanding examples of several of the styles, the vernacular versions of each style also appear in well-executed designs, showing not only the high-style favored by the well-to-do, but also the growing interest of the 19th-century middle classes in architectural style (e.g., the Shurr House, a small Queen Anne cottage at 1436 Avenue, the Greek Revival Billings House, 1201 College Avenue, with its full pediment and corner pilasters, and the Neo-Classical Revival Pushee House at 1228 South Main Street, which imitates the grandeur of the large turn-of-the-century mansions on a tiny scale).

The district features rarer forms, too, such as the once-grand William Dingee house at 827 Lake Avenue, in the French Second Empire style. Even the dependencies, which include an oriental-style garage behind 926 South Main Street, received careful attention to detail.

The quality and wealth of architectural styles in the area is a result of several factors. An early development of industry and commerce in Racine created families desirous of expressing their new prosperity in the design of their houses, thereby resulting in outstanding examples of mid- as well as late-nineteenth century styles. Quality building materials were brought to Racine from the East by boat, and a ready supply of high-quality bricks was available from several local brickyards. A high level of craftsmanship was displayed by Racine tradesmen, many of whom brought Old World traditions to Racine, such as the Welsh, who lived in a community within the district, and other European groups who settled in other parts of the city. And, finally, a revived interest and renewal of much of the area has encouraged pride, preservation and restoration of many of the Victorian houses.

The final developmental stage of the area within the historic district lasted from 1900-1920. This was a major period of growth for Racine, in which many new and important industries were established (most notably: autos, auto parts, and electrical machinery). Some industries changed their focus to meet twentieth century needs; foundry and machine-shop products became increasingly important, and production of agricultural implements continued to grow.

Growth and development in Racine since 1920 have been built upon this industrial foundation. Manufacturing has continued to dominate, making Racine today, with a population of roughly 100,000 a true "factory town."

More than seventy-five per cent of the early settlers of Racine came from New England and New York. The only European nationality to immigrate to the area and settle within the historic district were the Welsh, who came to Racine as early as 1840. They built tiny frame cottages at first and had established two Welsh churches in the area by 1850. Many of the early Welsh settlers worked for Welsh contractors at the J. I. Case Company. Others, such as Owen Williams and L. S. Jones became carpenters and builders and constructed many of the homes in the historic district. Houses built by L. S. Jones which still remain are 1526 College Avenue, 102 Tenth Street and its barn, and the porch on 847 College Avenue. According to his granddaughter, Owen Jones built the house at 847 College Avenue.

As the Welsh began to prosper in the community, many of them tore down their tiny first homes and built more substantial houses on the same lots. Of these later houses, some which remain include houses connected with the Pugh family at 827 South Main Street, 818 Park, 836 Park, and 840 College Avenue; Howell family houses at 901, 905, 909, and 913 College Avenue; and the D. P. Wigley house at 908 Park. Not until late in the nineteenth century did members of other nationality groups move into the district. Men like Joseph Miller, a native of Prussia, and Ernst Hueffner of Germany bought homes in the southside neighborhood after they had established themselves and become well-to-do.

By the 1960's some believed that the decaying neighborhood was destined to become an area of urban blight. But in the early 1970s housing shortages, a nationwide interest in preservation, reasonable costs of purchase of the rundown houses, and three local community development organizations (the Southside Revitalization Corporation, the Central City Committee, and the West Park Neighborhood Association) encouraged a significant revitalization of the district. The area is once again fashionable.