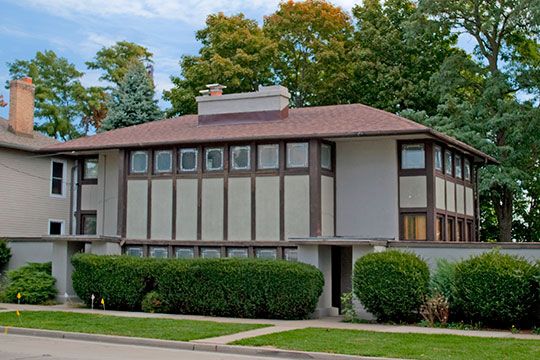 Racine lies at the mouth of the Root River where it empties into Lake Michigan.

The idea of locating a city at the mouth of the Root River first took form in the mind of Gilbert Knapp while he was an officer in the United States Revenue service. For several years he was master of the Cutter, A. J. Dallas, and in the course of his duty visited and became familiar with every important river and harbor on the lakes.

In 1827 he retired to private life and engaged in trading and forwarding in Chautauqua County, New York. When details of the "new purchase" in Wisconsin became public property in 1834, he sold out his business and in fulfillment of a promise made years before to return to the Root River and found a settlement, he proceeded to Chicago to make arrangements and put his plans into effect.

He hired two men, William and A. J. Luce, and the party of three started out on horseback in early November, 1834, lightly equipped with provisions, axes, and other necessary tools and supplies for primitive work.

In a few days they arrived at the cabin of "Jambeau" at Skunk Grove, from which place they were guided to the mouth of the river by an Indian.

The Luce brothers proceeded at once to build a cabin in which they were to spend the coming winter. This hut was located on the ground now occupied by T.M.E.R.&L. Co., on the west side of Lake Avenue, a little south of 2nd Street, and it was the first bona fide settler's cabin built in the territory now included in the counties of Racine, Kenosha, Walworth and Rock.

While the cabin was building, Captain Knapp carefully explored the land on both sides of the river mouth, and marked or blazed out the boundaries of his "claim," which included nearly 160 acres; it extended about 1/2 mile north, and 1/2 mile south of the river, and approximately 1/4 mile back from the lake shore; the land covered by his claim became known later as the original plat of Racine.

Captain Knapp did not stay long on the ground after locating his claim; he left his 2 men in charge of his interests during the winter at Port Gilbert, which was the name he gave to the town site. He returned to Chicago to perfect arrangements for promoting his enterprise in the spring.

Captain Knapp was not a rich man, and he had enough foresight to know that he was going to need financial backing and moral support in holding and developing his claim, and before returning, in the spring of 1835, he had enlisted the cooperation of two strong men, Gurdon S. Hubbard of Chicago and Jacob A. Barker of Buffalo, each of whom acquired 1/3rd interest in the enterprise. The letter of George Knapp to Mr. Baker, dated March 30, 1835, offered him a 1/3rd interest for $1,200.

Gurdon S. Hubbard was the more actively interested of the two associate partners. He was born in Windsor, Vermont, in 1802, and landed on the marshy banks of the Chicago River in 1818, when there was but one family living there, outside the Fort Dearborn stockade. In a few years Hubbard became an Indian trader, on a large scale, and in 1830, made his permanent home in Chicago. Previously he had been an agent of the American Fur Company of Montreal, with headquarters at Mackinac, in whose interest his first trip to Chicago had been made.

Jacob A. Barker was born in Lebanon, Connecticut in February, 1793, son of Judge Zenas Barker. The family moved to Buffalo, NY in 1802, where Jacob A. resided until his death at which time he was said to have been the oldest resident in Buffalo. He was a man of large affairs, and of broad public spirit, but seems to have shown but little active interest in the founding of Racine, aside from his $1,200 investment.

Gilbert Knapp was the founder of Racine, but had he been two months later, he would not have had that distinction, for following him so closely that they almost trod on his heels were other men as clear of vision, as stout of heart, as steady of purpose and as capable in execution of an enterprise as he was.

In the latter part of November 1834, William See, Harrison K. Fay, and Richard Carpenter of Chicago, and Edward Weed of Plainfield, made an excursion as far as the mouth of Chepekatawseb, Root River, and Carpenter located and marked out a claim near the mouth of the river on the north side. He was obliged to abandon it later, however, as it was found to be on Captain Knapp's land. Weed located a claim just west of what is now Mound Cemetery, and lived there for years. It later became the homestead of Nicholas D. Fratt. See & Fay made a claim in company at the Rapids, where the dam is now located, and built a saw mill on the east side, and later a grist mill on the west side of the river.

The saw mill was a convenience for the settlers, for the lumber they made was in great demand. In the winter seasons the lumber was brought down river on runners on the ice.