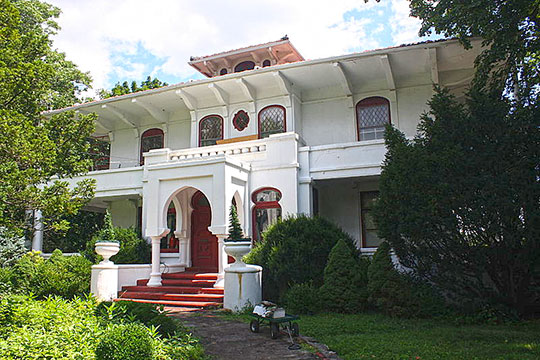 Formed March 11, 1752; named by Thomas Penn; prior to the Revolution comprised all the northeast section of Pennsylvania; chief industries, Bethlehem Iron and Steel Works, where 15,000 men are employed day and night; silk mills, graphite works, and other manufactories. Here were Washington's storehouses along the Delaware River, with supplies for all branches of the army; a point of attack by the British battling between West Point and Trenton, buildings are still in evidence. The famous backwoods rifles used by two thousand Pennsylvanians against the British at Boston were made here.

County seat, Easton, founded by Thomas Penn, 1751; at "The Forks of the Delaware, where the water is deep and smooth," population 33,813 [2005, est., 287,750]. In center of the public square is the monument to soldiers of this county in the Civil War, on site of the old Northampton court house that stood for a hundred years; on its threshold was promulgated the Declaration of Independence, the same day as in Philadelphia; the old court house bell, that rang out then, is still doing public service. The first flag, combining stars and stripes, as an emblem of a new nation, was made here, showing thirteen eight pointed stars and thirteen stripes in the field, this flag is said to be the one now in the Easton Public Library, deposited in 1821, after being used in the War of 1812; in a special room of the library is the private collection of Samuel Sitgreaves, with rare volumes of American history. Next to Sitgreaves' office was the home and shop of Henry Derringer, a gunmaker of the Revolution, whose son invented the Derringer pistol. On the public square, Light Horse Harry Lee, from Virginia, recruited his troop of Pennsylvania Germans, and horses. Valuable papers and moneys belonging to the state and national government were placed in the custody of Robert Levers, during British occupancy of Philadelphia.