Photo: The Gemeinhaus is the oldest building in Bethlehem, Pennsylvania. It is a log building, constructed to house married couples of the Moravian community that founded Bethlehem. It is also notable as the residence of botanist Lewis David de Schweinitz, and presently houses the Moravian Museum. The Elmwood Historic District was listed on the National Register of Historic Places in Photographed by User: Pubdog (own work), 2011, [cc-by-1.0 (creativecommons.org/publicdomain/zero/1.0/deed.en)], via Wikimedia Commons, accessed December, 2017. 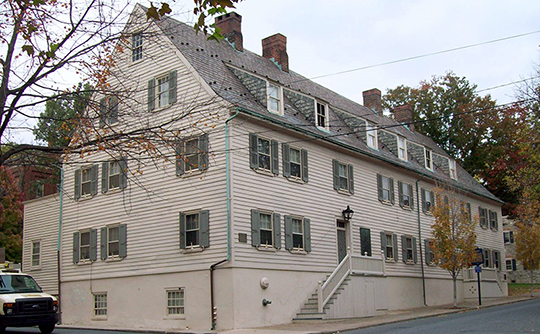 The city is located partly in Northampton and partly in Lehigh County.

On the Lehigh River, connected with South Bethlehem by two bridges. From a hill in South Bethlehem there is a wide view from Delaware Water Gap to the Blue Ridge. South of Bethlehem, near Hellertown, is Lost Cave.

In 1741 a company of Moravians from Bohemia and Saxony, under the leadership of David Zeisberger, arrived here and built the first log cabin, a community dwelling house. It was finished just before Christmas Eve, and on that day the second party arrived, among whom was Count von Zinzendorf, Bishop of the Moravian Church. Immediately they began the erection of the large stone buildings, of European architecture, which are still standing.

The Bach Festival, held annually late in May, is a development of the Moravian "service of song" started by Zinzendorf in 1742. It is one of the outstanding musical events of the country, attracting music lovers from far-away points. Bethlehem is famous for its great iron and steel plants. Of interest: