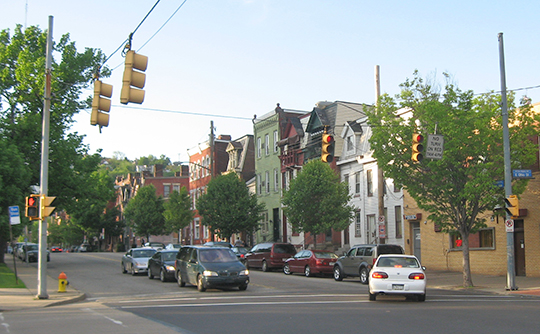 The Dutchtown (Deutschtown) Historic District was listed on the National Register of Historic Places in 1983. [‡]

Dutchtown (Deutschtown) Historic District, also known as Pittsburgh's East North Side Neighborhood, borders the park setting of the East Commons of Old Allegheny on Pittsburgh's North side. The old Dutchtown Historic District is a fine collection of nineteenth and early twentieth century residential and commercial buildings which may be studied in four sections: East of Cedar Avenue (between East Ohio and North Avenue); East Ohio Street; the Avery, Lockhart, and Pressley Streets area; and the Knoll Street/Linden Place area. Similar in nature to the original fabric of much of the North Side, this portion of East Allegheny is notable for the generally good integrity of its buildings and the restoration activity occurring there, particularly along the residential streets.

The district contains approximately 550 single and double buildings (double counted as two buildings), 108 of which have been recorded on Pennsylvania Historic Resource Survey Forms. Of these buildings, only 32 or 5% may be classified as intrusions.

East of Cedar Avenue (between East Ohio and North Avenue)

The Cedar Avenue portion of the Dutchtown Historic District extends approximately seven blocks, from North Avenue to one block south of Pressley Street. This fairly continuous wall of buildings, almost all residential, faces the tree-filled park of the East Commons. An 1830 map of the area shows that Cedar was laid out in lots, but no structures existed. By 1872 these lots were nearly all developed, and by 1901 the street was totally developed. Minimal rebuilding has occurred since that time.

The existing environment consists predominantly of rowhouses with stoops, set close to the sidewalk. They are generally two and a half to three stories in height and three bays wide, constructed of brick or stone with detailed ornamentation. Most are Italianate, Second Empire, or Queen Anne in style, although a few other styles are represented as well. Many were built as pairs.

Several buildings along Cedar Avenue may be highlighted. Among the more interesting houses are a freestanding Italianate farmhouse at 404, the Romanesque house at 408 (now a funeral home), and a pair of town houses with highly enriched facades at 814-816. The Art Moderne White Tower, dating to 1925, is the newest structure on the street.

The streets east of and perpendicular to Cedar Avenue terminate at the East Commons, and provide vistas to the park from the eastern section of the district. Although these streetscapes have seen insensitive alteration (insulbrick especially) they maintain integrity of size, scale and often density. They form a residential pocket just west of the proposed East Street expressway. Despite a large parking lot on Foreland east of James Street and west of Middle the density of the neighborhood is fairly intact. Special attention is due the Latimer Middle School on East North Avenue between James and Middle Streets, and Julian's (formerly Wiegand's Tavern) at Foreland and James Streets (NW).

The East Ohio Street linear zone is a significant portion of the Dutchtown Neighborhood, comprising its main commercial thoroughfare and connecting Allegheny Center with outlying areas to the east. From Cedar Avenue to East Street, the commercial wall is fairly well intact, with only occasional modern intrusions or voids. Beyond East Street, demolition and deterioration relating to plans for the East Street Expressway have created a spotty environment with considerably less building coverage.

A variety of approaches to the commercial building, dating from the mid-19th to early 20th centuries is present there. These structures, ranging in width from one to six bays, and in height from one to five stories, represent the full development of commercial architecture from the Italianate mode through Second Empire, Romanesque Renaissance Revival, Queen Anne, and early 20th Century.

Many have been the target of unsympathetic remodelling activities. Such alterations range from first story store front changes to facings which entirely obliterate the original facades. Despite the alterations; however, this fine array of early commercial architecture remains relatively intact and stands as one of the only extant early commercial rows in Pittsburgh.

The Avery, Lockhart and Pressley Streets portion of the district is a quiet residential area of three parallel streets, clearly bounded by the two main thoroughfares to the west and north. Cedar Avenue and East Ohio Street (excluding the properties fronting on those streets); and by vacant land cleared for urban renewal and proposed highway construction to the east and south.

The neighborhood contains a wealth of row housing dating from the mid-to late nineteenth century. Ranging between two and four bays in width and between two and three stories in height, these structures are mostly of brick, although some on Avery Street are of wood. They represent modest interpretations of a variety of styles, including French Second Empire, Italianate, Romanesque Revival, and Queen Anne. Most have back yards which can be reached from the street through small alleys. All are in fair to good condition, with few incompatible alterations. The sidewalks, of brick and block, are lined in places with small trees.

The area is framed by two churches, located at the eastern and western ends; St. Mary's Roman Catholic Church of 1853-54 at the northwest corner of Pressley and Nash Streets, with its associated Victorian Gothic priory; and Allegheny United Church of Christ, dating to 1887, at the western end of the area between Avery and Lockhart Streets.

The housing is primarily brick as are the tree-lined streets. The area is highlighted by two late 19th century Gothic and Romanesque Revival churches which stand sentinel at the northeast and northwest corners of Middle Street and East North Avenue. A Second Empire rowhouse at 508-512 East North Avenue stands out as an intact example of its style.

The Dutchtown Historic District derives its significance from a rich history as part of the City of Allegheny, as well as a fine collection of nineteenth and early twentieth century buildings. Comparable in age, design and integrity to the three other North Side Districts which are listed on the National Register (Mexican War Streets, Manchester, and Allegheny West), Dutchtown stands out for its homogeneity and the strong relationship it still maintains with the East Commons Park across Cedar Avenue.

In its early period, this section of Pittsburgh was part of the 3000-acre Reserve Tract created by the state in 1783 to encourage settlement north of the Ohio and Allegheny Rivers. By mandate to legislation passed in 1787, a survey for the town of Allegheny was made the next year. Planned as the county seat of the new county of Allegheny, it was plotted into blocks and lots in a square grid pattern, a plan which survived unchanged until the development of Allegheny Center on the original town site. One hundred acres surrounding the town were set aside for "a common of pasture;" in the 1860's it was transformed into a landscaped park still known as "The Common," one side of which lies across Cedar Avenue from Dutchtown. The remainder of the Reserve Tract was divided into parcels called "out-lots" or into farms.

The town grew slowly until the first bridge was built across the Allegheny River around 1820, and 1828, when Allegheny was incorporated as a borough, the population was 1000 persons. Its eastern boundaries can be successively identified as James Street, Middle Street and Madison Avenue. According to a map dated 1830, the first subdivision of out-lots in East Allegheny occurred with the opening of two streets off of the commons, now Lockhart and Pressley Streets. A private toll road, the Butler Turnpike (E. Ohio Street), was in use. Near Madison Avenue, the Pennsylvania Canal passed into Pittsburgh via an aqueduct across the river. It served as an important transportation route to and from the eastern end of the state and contributed to the expansion of Allegheny industries. Much of the fabric of the district dates from the heyday of these nearby traffic corridors.

Among the institutions founded c. 1838 was Avery College, founded by Charles Avery (1784-1858) in 1849 to give classical education to Negroes; it stood just to the east of the present day Dutchtown District, but was demolished in 1962. Further development was fostered by the new railroad lines. The canal right-of-way was acquired by the Pennsylvania Railroad in 1857, and by c. 1860 the present street alignment could be identified on city maps.

Immigrants were a significant part of the expanding population, and it was from the concentration of Germans here that the eastern portion of Allegheny acquired the name of "Dutchtown," a mispronunciation of Deutschtown. As the city grew, East Ohio Street became an impressive commercial street while other areas of the neighborhood accommodated both houses and industries. In 1907 Allegheny became a part of the City of Pittsburgh. Like other sections of Pittsburgh, Dutchtown experienced an influx of immigrants from Italy and Eastern Europe during the early twentieth century. Nevertheless, the German character continued to predominate. Even today census statistics affirm the German, and to a less extent other European, sources of much of the population.

Dutchtown continues today to embody the essence of Allegheny City. Its building stock dates primarily from the 1860's to the 1880's, and the street patterns, density and housing styles exhibit mid-19th century integrity. They are of brick construction with wood ornamentation, ranging from ornate to simple. The workmanship of many of the cornices and lintels is irreplaceable. The use of the Italianate and Second Empire styles contributes greatly to the feeling of an earlier time and place.

Dutchtown is distinguished from neighboring North Side neighborhoods by its ethnic associations and intense feeling of neighborhood solidarity. It also retains the busiest original commercial district left on the North Side since the development of Allegheny Center in the 1960's. In the 1940's and for many decades before, this stretch of East Ohio Street served as a central shopping district for all of the North Side including Manchester and more outlying areas.

Boundaries were chosen by using several criteria — at the east the visual barrier of the East Street demolition corridor designed to make way for a highway creates a definite visual break. To the south a decline in concentration destroys the integrity of the area just north of Canal Street and the Pennsylvania Railroad tracks. On the west the Allegheny Commons Park creates a green "barrier" which clearly delineates the district, and to the north the hillside which looms above Dunloe Street creates the final natural boundary.