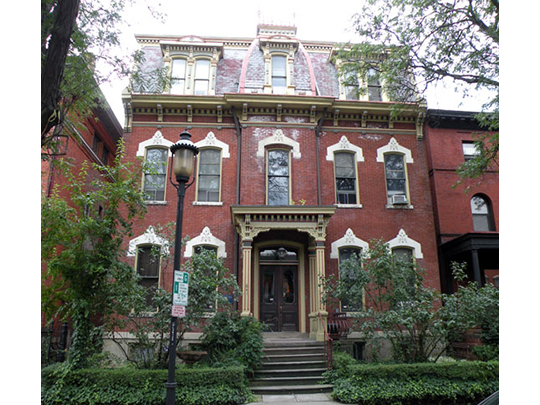 The Allegheny West Historic District was listed on the National Register of Historic Places in 1978. Portions of the content on this web page were adapted from a copy of the original nomination document. [1]

The Allegheny West Historic District is located on Pittsburgh's North Side, adjacent to Allegheny Commons, near the confluence of the Allegheny and Monongahela Rivers. The area became a desirable residential district about the middle of the nineteenth century. Streets were laid out and were built up with upper middle class and upper class housing of various types — single family houses standing in their own grounds, row housing, large double houses, and small or large single family houses built wall to wall in the Classical urban pattern. Although some of this construction has been demolished, a great deal still remains.

Ridge Avenue was always the most fashionable street and was especially favored by the iron and steel millionaires of the later nineteenth century. Still remaining on Ridge Avenue is the Byers-Lyons House, Moorhead House, Wm. P. Snyder House, and Memorial Hall, which was once the dormitory of the Western Pennsylvania Theological Seminary. The "Millionaires Row" of Ridge Avenue continued around the corner to Brighton Road, where the Darlington and B.F. Jones Houses still stand in good condition.The upper class residential amenity of Western Avenue (that bisects the district) celebrated in Marcia Davenport's The Valley of Decision, has almost completely vanished. It is now heavily commercial, but that portion of the street lying between Allegheny Avenue and Brighton Road retains much of its closely built, post 1860 housing, which is usually of modest dimensions.

Lincoln Avenue, once second only to Ridge Avenue in residential favor although it is only two blocks long, once had a wide variety of upper class housing of which something still remains. Toward Allegheny Commons some of the large three-story Italianate double houses of the 1860's are still extant but they have been badly treated. Midway in the block is a small two bay, two story and attic, single house of the Classical urban type (No. 838). It is stone fronted and stylistically it is one of those fascinating amalgams of the Richardsonian Romanesque and the Classical. The facade is well proportioned, the scale is good, and the detailing is restrained. It would be pleasant if this house could be preserved as a good example of the small upper class townhouse of the 1890s.

No. 845 is a very interesting Richardsonian Romanesque house of c.1890 whose simple red brickwork is reminiscent of that of Emmanuel Church at Allegheny and North. Next door at No. 849 is an Italianate house whose front elevation was handsomely recast in the Colonial Revival style about 1900.

The house of William Thaw (930 N. Lincoln) is a strange compromise between the three bay row house of the 1880's and the free-standing urban private house that had also been characteristic of Allegheny or the North Side from the very beginning. The image still presented to us that has been miraculously preserved is, again, that of the standard three bay townhouse built close to the sidewalk, repeated twice from its more usual version of a hall door and parlor on one side into another unit with a recessed front porch, and again in a further section with a loggia in front (glassed in but we do not know when this was done) — probably an enclosed version of the standard front porch beside it. At number 9 is a handsome free-standing Tudor style house in brown brick. It's rear elevation with a good stair window is especially interesting. In general, the "mansion" areas have suffered much demolition, rendering those surviving examples all the more spacious.

The Allegheny West Historic District is located on Pittsburgh's North Side near the confluence of the Allegheny and Monongahela Rivers. Until quite late in the 18th century, the area was still the preserve of the Shawnee and Delaware Indians. The east-west Indian trail that lead to the mouth of the Beaver River began on the south bank of the Allegheny River near Lawrenceville and traversed Allegheny West. Migratory Indians and Indian hunting parties traveled this trail. Later it became the route to Logstown which was followed by most of the important figures associated with the early settlements of Western Pennsylvania. Among them were George Washington and his guide Christopher Gist; "Mad" Anthony Wayne, the Revolutionary War hero; the Indian agents, George Croghan and Andrew Montour; Guyasuta, the great Seneca Chief; the half-breed, Peter Chartier; the Delaware Chief, Kilbuck; and Christian Frederick Post, the Moravian Missionary who sought to wean the Indians away from the French.

The land was later part of what was called the Reserve Tract. In September, 1784, the Supreme Executive Council of the Commonwealth of Pennsylvania ordered the land opposite Pittsburgh to be surveyed and laid out as a manor or reserve. The land was to fulfill the land warrants that had been issued to the Continental Soldiers as partial payment for their services in the War of Independence. On October 5, 1787, David Redick, a member of the council from Washington County, was appointed by the council to survey and lay out a portion of the reserve tract. His plan fixed the basic pattern of the North Side of Pittsburgh substantially as it exists today. In 1788 lots were sold at auction in Philadelphia.

Streets were laid in the area in the middle of the nineteenth century. Houses were first built in the area in 1846-47. In the 1860's there was another period of housing construction and still another occurred around the turn of the century. During the late nineteenth century Ridge Avenue became the enclave of the new millionaire industrialists, among them Henry W. Oliver, William Penn Snyder, Harmar Denny, and Alexander M. Byers. Millionaires' Row as it was called, possessed the most lavish townhouses in Pittsburgh, but few of these remain today. The surviving houses have been adapted to institutional or commercial use.