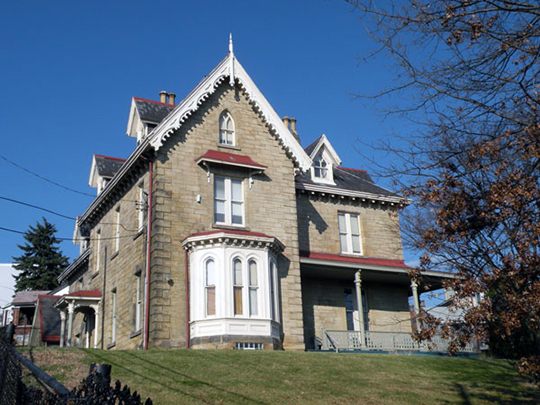 The Henderson-Metz House (1516 Warren Street) was listed on the National Register of Historic Places in 1979. Portions of the content on this web page were adapted from a copy of the original nomination document. [1]

The Henderson-Metz House is a two and a half story stone dwelling of the Gothic Revival style. The house was probably built about 1860 when this area of Fineview on the North Side of Pittsburgh was divided into building lots by the Henderson family. The house stands on a lot at the intersection of Henderson Street, Jay Street, and Warren Street, which overlooks the Allegheny River and commands an all-encompassing view of downtown Pittsburgh and the Allegheny River Valley.

The Henderson-Metz House is asymmetrical in plan. A one story veranda on the south and east facades of the house leads to what was the original entrance. The interior has been divided into apartments and, unfortunately, the original room divisions are not known. Although the house has somewhat deteriorated and some minor additions have been made to the exterior, the elements which represent the character of its original Gothic Revival design have not been changed.

The house was constructed of irregularly coursed cut sandstone. The coursing of the dark stone is emphasized by the light mortar. Details in the stonework of the Henderson-Metz House, including the quoins and the Gibbs surrounds with projecting keystones of the window and door openings, are not characteristic of the Gothic Revival, but contribute significantly to the distinctive character of this house.

In addition to the asymmetrical plan, the style of the building is defined by the steeply pitched gables of the overhanging slate roof. Decorative machine cut soffit brackets and bargeboards on the projecting gables of the south and east facades remain in remarkably good condition. Each chimney has polygonal clay chimney pots. The original dormers have steep gabled roofs and triangular arch windows. The simple Y-tracery of the original windows remains in the western dormers.

A projecting bay window on the first floor of the south facade has rounded arch windows and simple brackets. The second floor window has a bracketed window hood. A small window with triangular arch is located above these windows in the attic gable. These window details, along with stone corner steps subtly define the original entry facade. The present main entry door on the west facade has a small bracketed porch with hipped roof.

Most of the original window sash have been replaced by a variety of glazing methods. Nevertheless, the outlines in stonework clearly define the original fenestration, and restoration of appropriate sash could easily be accomplished. An insignificant one story addition on the north side of the house and a few attic dormers are other alterations to the exterior. Although the interior of the house has been altered to accommodate modern apartments, the quarter turn staircase is probably the original main stairway.

There are two stone outbuildings to the north of the main house. The carriage shed and a cold cellar have steeply pitched gable roofs and quoins. The Henderson Cottage at Lee and Warren Streets, a board and batten cottage, may have originally been the guest cottage of the Henderson-Metz House.

The significance of the Henderson-Metz House is found in both its architectural design and its location in the Fineview area of Pittsburgh. The mid-19th century popularity of the Gothic Revival style was primarily the result of publications by Andrew Jackson Downing. In books such as Architecture of Country Houses (1850), Downing described the Cottage Gothic and Villa styles as being appropriate architecture for the country residences of people who had lived in more formal houses in the city.

The Fineview area of Pittsburgh was once an impassable series of hills separated from the town of Allegheny by a series of lowlands and swamps. In 1828 the nuns of the Order of St. Clare erected the St. Clare Young Ladies Academy on a sixty acre site in the area. When Fineview was made more accessible to Pittsburgh in the second half of the 19th century, residential development occurred. The site of the Henderson-Metz House was defined by the mid-19th century concept of the garden suburb at the time that it was constructed.

Although the design of Henderson-Metz is not taken literally from any of Downing's publications or other pattern books available at that time, the choice of style was obviously influenced by these publications. By 1860 the Gothic Revival was well established in America. In the original Downing plans, Cottage Gothic structures tended to be symmetrical, but with the acceptance of the asymmetry of Gothic Revival mansions, particularly the designs of Alexander Jackson Davis, the design concept was extended to smaller domestic structures.

The Henderson-Metz house represents a fascinating blend of the different aspects of the Gothic Revival. The fairly simple plan and machine cut decorative elements are more characteristic of the widely used cottage designs which were usually constructed of board and batten. Yet the obvious expression of asymmetry as well as the choice of stone as a building material create a grander and more elaborate residence.

The Henderson-Metz House is one of the most outstanding examples of the Gothic Revival style in the Pittsburgh area. Rapid expansion of the metropolitan area at the end of the 19th century undoubtedly accounts for the destruction of most houses of this style. The Singer House in Pittsburgh suburb of Wilkinsburg (1863-1869), listed on the National Register, relates stylistically to the Henderson-Metz House. The preservation of the few remaining examples from this period in the Pittsburgh area is essential.