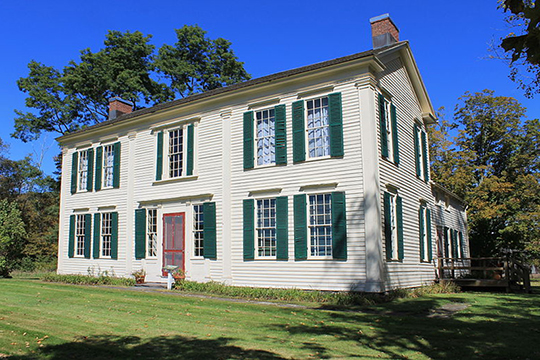 Down to 1797 the territory now forming Delaware county was included in the counties of Ulster and Otsego. The former reached to the West branch of the Delaware river which formed its northwest boundary; the latter reached the same stream which formed its south-east boundary. The inhabitants south of the river were compelled to go to Kingston for their necessary law business, while those on the north side went the long journey to Cooperstown. In 1794 a plan was mooted to carve from the two counties another, to be called Delaware county from the name of the Delaware river which took its rise within the proposed boundaries. There was a strong opposition of course, as there always is, to the formation of the new county, and a petition numerously signed was sent to the Legislature protesting against the proposed action.

For several years therefore the measure was held back, and it was not till 1797 that the bill was finally passed. During this session of the Legislature, Dr. J.H. Brett, a physician of Harpersfield, was a member of the Assembly from Otsego county, John Barr of Middletown a member for Ulster county, and Ebenezer Foote a member from Newburgh in Orange County. These three active and efficient members espoused the cause of the new county, and mainly by their agency the bill was carried through the Legislature and became a law March 10, 1797.

In furtherance of the organization of the new county the supervisors held their first meeting May 31, 1797. They met in the new town of Delhi. The place of meeting was at the house of Gideon Frisbee, which stood at the junction of Elk creek with the West branch of the Delaware river and which for many years served as a tavern. The supervisors were as follows:

The records of this first meeting have been preserved and are of great interest. The court of common pleas held its first session at Mr. Frisbee's house on October 3, 1797. The first jury impaneled in the county was in attendance, and it is the tradition that its sessions were held under a large butternut tree which was standing until a few years ago. The judges of this court were: Patrick Lamb, William Horton, and Gabriel North; assisted by Isaac Hardenbergh and Alexander Leal. The following attorneys were admitted to practice at this court: Conrad E. Elmendorf, Philip Gebhard, Anthony Marvine, David Phelps, Erastus Root and Cornelius E. Yates. Until a court-house was built, in which the county business could be conducted, the courts continued to be held at Mr. Frisbee's tavern.