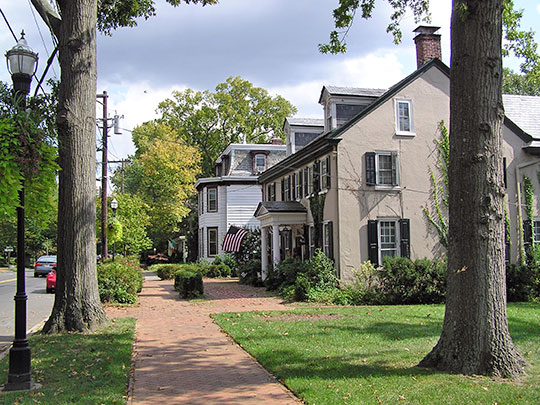 The Moorestown Historic District was listed on the National Register of Historic Places in 1990. Portions of the content on this web page were adapted from a copy of the original nomination document. [‡] .

Moorestown is a community significant for its rich history and diverse architecture. From early settlement through suburbanization, Moorestown has witnessed various stages of development that transformed it from one of Burlington County's agricultural communities to one of Camden's and Philadelphia's most desirable suburbs. The town's early heritage, as well as its ongoing maturation, are clearly visible in the streets of the Moorestown Historic District which contain the well-preserved landmarks of local history. These landmarks not only describe local history, but also document a broader trend in American architectural history. The Moorestown Historic District provides a pictorial history of the nation's domestic architecture, displaying excellent examples of the major stylistic movements from colonial to modem times.

Moorestown, originally a village in Chester Township, Burlington County, was first settled in about 1682. The early settlers were Friends who located in the vicinity of springs near a ridge along which the village was to grow. These settlers and their Native American predecessors relied upon the upland wooded ridge for the diversity of natural foodstuffs and the availability of water. The vast tracks of hardwood timbers and native sandstone were also to play an important part in settlement patterns by providing ample materials for shelters and other structures. The eastern end of settlement developed by the Friends on the south side of Rancocas Creek was called "Chestertown" and the western end, established along Indian Spring to the south of 286 W. Main Street, was named "Rodmantown." The village center of Moorestown is unusual in that it began at the eastern and western springs, then advanced toward the middle. The earlier names were dropped for "Chester" and then "Moorestown" in honor of Thomas Moore who came here in 1722. By the end of this first century of settlement, the turnpike from Mt. Holly to Camden had been laid out along what became Main Street, and Chester Avenue or "Meeting House Lane" was opened near the Friends' 1700 log meetinghouse (demolished) and burial ground, an aesthetically significant open space. The village's eighteenth century development largely resulted from the efforts of Thomas Moore, the first tavernkeeper and realtor, who in 1732 purchased 33 acres on the northern side of Main Street. This land, extending from the Friends burial ground at Chester Avenue to Locust Street and northward to the middle of Second Street, was subdivided and sold for residences and businesses. One of these early enterprises was Moore's inn at the northwest corner of Main and Union Streets. John Cox's tavern, east of Chester Avenue, was the oldest hotel in the eastern end of Moorestown. These two taverns and the Friends' Meeting House provided centers for the village's activities.

Sawmills and tanneries were among the first industries as was farming, particularly fruit-raising. These industries prospered well into the nineteenth century, with the improvement in road transportation augmenting the shipment of goods. Moorestown had a nearby market for its produce in Philadelphia and a second outlet in New York via shipping points at Perth Amboy and New Brunswick. The business section of the village grew in the nineteenth century, catering to an expanding population, nearby farmers, and travelers passing through along this major route to Camden and Philadelphia. Physically, the village expanded northward to 2nd and 3rd Streets, which were laid out in 1840 and soon lined with single, double, and row houses. Accompanying the community's growth was the organization of other religious denominations: Methodist Episcopal (1815), Trinity Episcopal (1837), First Baptist (1837), Protestant Episcopal (1838), and Roman Catholic (1853).

The greatest impetus to Moorestown's development, however, was not to be felt until the 1860s. In 1867 the Camden and Burlington Railroad reached Moorestown, dramatically improving the village's accessibility to Philadelphia. The railroad ran down 3rd Street and stopped at a station at Chester Avenue (1867) and a second station at West Moorestown (1870). The advent of the railroad triggered a wave of development north of 3rd Street, speculation of which had begun just before its arrival. According to historical accounts, in 1864, a partnership was formed by ten men, the purpose of which was to acquire 48-1/2 acres of farmland north of the railroad and to resell the land as subdivided tracts. Deed records indicate that John Stokes, acting as a trustee for the partnership, acquired the land from Charles Collins on October 30, 1869, then in 1870 sold lots to twelve individuals, seven of whom were from Philadelphia. Calling their development the "Company Grounds," the partners, each of whom retained a property for his or her own, launched "the first premeditated and comprehensive invitation to outsiders to make Moorestown their abiding place." Protecting the value of these investments were restrictive covenants prohibiting slaughterhouses, pig sties, saloons, and shops and a requirement — though not enforced — that no dwelling be erected for less than $5,000. The "Company Grounds," for which Central and Oak east of Chester were laid out, burgeoned into a suburban development of architect- and builder-designed houses between the 1880s and 1910s. Keeping abreast with the apparent success of this development, Central and Oak, west of Chester, were also laid out for residential development by 1885. The "Company Grounds" and its westward extension typically attracted Philadelphians anxious to live outside of the city, yet commute effortlessly to the urban workplace. Characteristically middle and upper class, these new Moorestonians represented a broad spectrum of occupations. The 1900 census indicates physicians, lawyers, insurance brokers, and merchants along Chester Avenue; builders, merchants, an engineer, a stockbroker, and a bank treasurer on East Central Avenue. This is in marked contrast with the profile of Second and Third Streets (closer to the railroad), where working class occupations were the norm: stage driver, carpenter, plumber, shoemaker, farmhand, mason, machinist, miller, and painter.

Main Street, too, experienced change during the railroad era although many of the pre-railroad houses were left intact and survive to the present day. Numerous late-Victorian and early-twentieth century houses were constructed, particularly at Main Street's east end, beyond the commercial core. Within the commercial core a wave of construction activity took place; a new First Baptist Church (1871), a major addition to the Town Hall (1889), a Presbyterian Church (1892), a new Catholic Church (1895), a new Friends' Meeting House (1897), and the Second Baptist (Black) Church (1898). Many of the improvements that came to pass along Main Street and throughout the town resulted from the efforts of the Moorestown Improvement Association. Founded in 1904, this organization made important contributions towards the attainment of sidewalks, sewer systems, trees along the roads, and other amenities.

As architecture, this extensive construction documents a history of American architectural styles, particularly those associated with suburban domestic architecture. Most of these buildings, especially those that predate the railroad era, are the works of master craftsmen and builders. Others from the 1880s to the 1920s represent the designs of the period's prolific architects fulfilling the aspirations of their successful suburban clients. The extant housing stock in Moorestown dates back to eighteenth-century Georgian homes along Main Street, the historic road to Camden. The transition into Federal and Greek Revival style architecture is also apparent as is the movement towards mid-nineteenth century romanticism. As advocated by treatises of the period's tastemakers, such as A.J. Downing, Moorestown boasts a collection of picturesque Gothic Revival cottages and Italianate villas that were well suited for this country setting. Victorian design and the Second Empire style with its characteristic mansard are also well represented, even in some of the original homes of the "Company Grounds" (123 and 135 East Central Avenue, 142 East Oak Avenue). The greatest concentration of buildings in the Moorestown Historic District, however, dates from the era of development that arose from the railroad.

The timing of Moorestown's late nineteenth century housing boom corresponds with a major trend in American architectural history, namely, a rediscovery and reinterpretation of the nation's colonial heritage. When the railroad first ran down 3rd Street, America recently had emerged from a war that had threatened its unity and entered into an industrial age that challenged its traditional values of home and family. Architecturally, the dawn of the Civil War had shown Americans still looking towards Europe for stylistic sources in the form of Gothic, Italianate, Romanesque, and French Second Empire antecedents. Inspired by England's rediscovery of its native heritage as led by Richard Norman Shaw and kindled by Colonial exhibits at the 1876 Centennial Celebration in Philadelphia, Americans looked inward at their own roots, an introspection from which emerged the popular Queen Anne, Shingle, and Colonial Revival styles of the late nineteenth and early twentieth centuries. These styles figure prominently in the Moorestown Historic District, particularly in the "Company Grounds" and West Main Street.

Although based on traditions, these new architectural styles were subject to interpretation. Depending upon the builder or architect and what the client was willing to pay, forms, details, and materials were manipulated to create the individualized homes that grace Chester Avenue, Central Avenue, Oak Avenue, and Main Street. Builders such as LaConey (17 E. Central Avenue) and Amos D. Cox (10 E. Central Avenue) produced more simple adaptations while prominent Philadelphia and Camden architects designed more architecturally sophisticated houses. Among these better known architects was Walter Smedley who had worked in Philadelphia with Quaker architect Addison Hutton and thereby had strong ties with Quakers, a factor which likely influenced his commission for Samuel L. Allen's mansion at 255 E. Main Street (1894), the Friends Meeting House (1897), the Joseph Roberts residence at 215 E. Central Avenue (1914), and the Thomas W. Elkinton residence at 45 E. Maple Avenue (1915), the latter two beyond the district Kennedy & Kelsey, who had completed alterations and additions to important Philadelphia social landmarks such as the Philadelphia Cricket Club and the Union League, designed the Georgian Revival house at 232 E. Main Street (1901). Walter Williams Sharpley also practiced in Moorestown, designing a handsome Georgian Revival house for William H. Roberts at 508 Chester Avenue and a Tudor Revival house for John O. Wilson at 515 Chester Avenue (1928). Although far from the last architects of record in the Moorestown Historic District, the Camden firm of Moses & King is noteworthy for the extent of its influence in Moorestown as well as the suburban Camden region. Within the Moorestown Historic District they are attributed with designs for 170 E. Main Street (1886) and 141 E. Oak Avenue (1900) both in variations of the Queen Anne and/or Colonial Revival styles. The commercial area of Moorestown also displays the contributions of important architects. Karcher and Smith, Philadelphians who designed the English Gothic girls' dormitories at Swarthmore College, utilized a similar palette in their design of Moorestown's Community House (1926) and Trinity Episcopal Church (1929). Simon & Simon, who designed banks in Philadelphia and Camden, were responsible for the Georgian Revival style Burlington County Trust (1927).