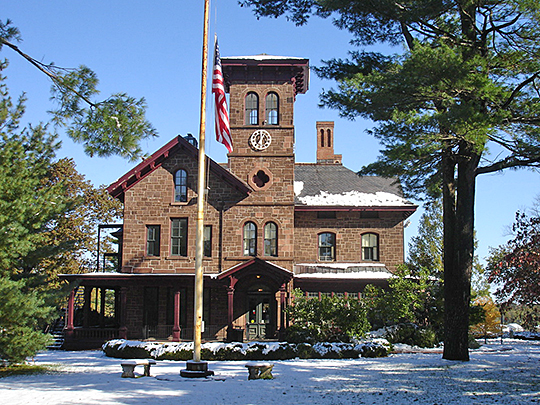 The permanent settlement of New Brunswick was made about 1730 by several Dutch families, and tradition has it that they brought with them material for building their dwellings. The town suffered severely during the Revolutionary war. In 1776-1777 it was occupied by the British, who threw up fortifications on the hill near the theological seminary. Lord Howe made his headquarters in the village, and the post was afterward commanded by Lord Cornwallis. Vessels came up the Raritan river to provision the troops, early in 1777, but were driven back by an American battery planted just below the town.

In 1784 the town was incorporated. In 1811, according to the "Gazette" newspaper, "the little hamlet hugged the river, and even Albany Street above Nelson was sparsely settled." In 1825 the town had grown wonderfully, and the population was estimated at five thousand. Traffic was carried on with the surrounding country by means of great wagons drawn by four and six horses, and a dozen sloops were constantly conveying farm products to New York and returning with merchandise. In 1807 the first bank, the Bank of New Brunswick, was founded by Jacob R. Hardenbergh and others, and conducted business until 1834, when it suspended. In 1833 the Delaware and Raritan Canal was opened, and in 1836 the first train reached the city over the New Jersey Railroad. The first manufactory, one for making paper, was established in 1837. In 1850 gas works were established, and waterworks were constructed in 1814.