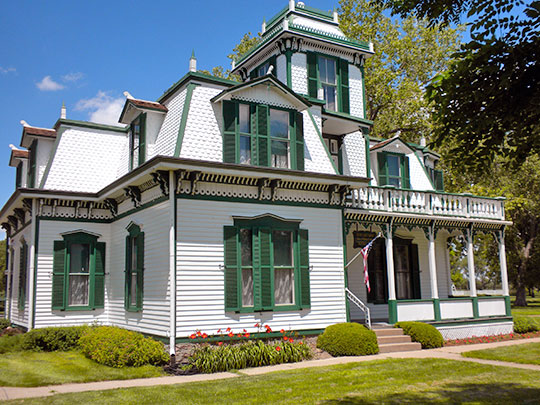 North Platte was laid out by General Grenville Dodge in November of 1866 for the Union Pacific Railroad. The site selected sits between the North Platte and South Platte Rivers, just west of their confluence in Lincoln County. North Platte native John Stryker notes that North Platte is the "most populous city in the western two-thirds of Nebraska" and that it is located approximately 280 miles west of the Missouri River and eighty miles north of the Kansas-Nebraska state line. Even though North Platte was laid out in 1866 it was not organized as a city until December 28, 1875 and the first city officials were: Anthony Reis, Mayor; Alexander Stouther, Treasurer; E. H. Barrett, Clerk; A. H. Church, Judge; A. Walker, Marshall; and J. W. La Munyon, Engineer.

North Platte quickly surged in population, a "motley crowd of laborers, business men, gamblers, and 'toughs' arrived with the rail line." Many of the early pioneers came from eastern and southeastern states and by 1867 some 2,000 people called North Platte home. With the initial population surge associated with the railroad came a somewhat suspect reputation, one that continued for several decades. Nebraska saloons were continually crowded. A large number of gamblers naturally came in that they might by their tricks secure the earnings of the railroad laborers, and of the travelers who would visit the town. Drunken broils were of daily occurrence, and vice reigned supreme." Another early chronicler adds that by 1868, "North Platte was infested with reckless desperadoes, brothels, gambling dens, and unlicensed saloons that ran wide open all days of the week and hours of the night. Most men went armed and few law-abiding citizens ventured out alone after dark.

North Platte's rough reputation continued well into the 1900s. Scholars Michael Wallis and Michael Williamson contend that throughout the 1920s, North Platte "continued as a wide-open haven for gambling, prostitution, and bootlegging; it was known up and down the Lincoln Highway as "Little Chicago." By the early 1950s, "North Platte had cleaned up its act and most of the "rooming houses" had disappeared."

When the railroad terminus was relocated to Julesburg, Colorado the community was nearly depopulated. By the early 1870s, many of North Platte's citizens and businesses (buildings included) had picked up and moved west. North Platte's first newspaper, for example, the Pioneer on Wheels (circa 1866) was printed in a "box car and when the terminus of the railroad was moved in 1867, the paper moved right along with it." Additionally, during this initial phase North Platte was somewhat of a shanty town filled with temporary structures. Archibald Adamson (1910) notes that many of the "questionable resorts were soon doing business in canvass tents." North Platte's so-called first citizen, A.J. Miller, recounts a "mammoth tent east of his store; in which there was a saloon bar; billiard tables, and all sorts of gambling devices."