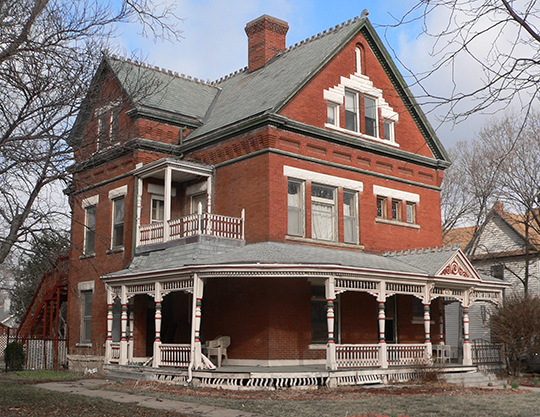 In 1867, the original designers of Lincoln laid out upon the prairie a grid of wide streets, square blocks, and regular alleys, from "A" Street on the south to "U" Street on the north, and from 1st Street on the west to 17th Street on the east. The gently rolling terrain accommodated this grid easily, creating a foundation for a city which was readily comprehensible and expandable. The Original Plat of 1867 provided business sites near the center of the city, reserved large blocks for the Capitol, state university, and a park, and provided land for a county courthouse, school sites, a market place and other necessities throughout the plan.

A strength of Lincoln's first plan was how readily it could be expanded by adding to the grid on the south, the east, and the north. Even the suburban towns founded east of the city in the 1880's and 1890s aligned their grids with Lincoln's, facilitating their integration into the city in the 1920's. A weakness of the plan was its close proximity to Salt Creek, which regularly flooded the western third of the Original Plat for nearly a century and impeded growth to the west and the north.

Much of the Original Plat remains evident, giving form to the city through such major features as the Capitol location, the core of the UNL City campus, the County-City Building location, three Lincoln Public Schools sites, and Cooper Park. The setting of the Capitol is enhanced by Centennial and Lincoln Malls and the landscaping of South 15th Street, all of which utilized the extra-wide right-of-ways assigned to those and other key streets in 1867. Throughout Haymarket Landmark District, the loading docks, Farmers Market, and sidewalk cafes show the multitude of special uses possible within the "ordinary" 100 foot right-of-ways. For its first fifty years, most expansion beyond the Original Plat faithfully followed the grid, as Lincoln grew from a town with a few dozen residents in 1867, to a city of about 55,000 by 1920. Sheridan Place of 1909 marked the first significant deviation from the grid, followed by Woodscrest and Sheridan Park in 1916. Few major additions used a simple grid after that time. The best of these new residential areas, including Woodsshire, Sheridan Boulevard, and its environs, add variety to the city, make fuller use of existing terrain, and provide ample, comprehensible connections back to the wider grid. These are the neighborhoods that "New Urbanism" or "neo-traditional planning" seeks to emulate in new development.

A unique historic and cultural asset of Lincoln and Lancaster County, and a special resource for providing orientation and connections throughout the city and the county, is Nebraska's remarkable State Capitol. The 400-foot tower was planned and executed as the key historic, architectural, and geographic landmark of the city and surrounding countryside.