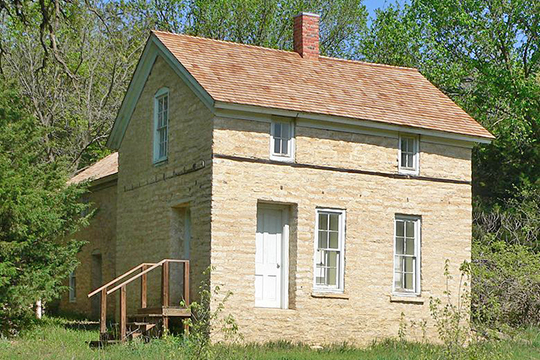 Fairbury was established as the Jefferson County Seat in 1871 and was incorporated in 1872.

In 1868 James B. Mattingly gave up freighting and built a sawmill on the banks of the Little Blue River near the Oregon Trail. People, returning from the gold fields, were beginning to settle along the trail. Back in Illinois, Judge W. G. McDowell foresaw the coming of a railroad through the area and came to Nebraska to "start a town" in this fertile valley.

In 1869 Mattingly and McDowell, each assigned 80 acres of the land from their claim, to plat a town. Right in the middle they left a block for the public square. For a name they chose McDowell's Illinois home, "Fairbury," there being only two by that name in the nation.

And people came—taking homesteads, setting up businesses, then establishing schools and churches. Mattingly's cabin served as the first school in 1869, with religious services held in various homes. In a few years the Methodists, Baptists, and Catholics each had their own church. Presently there are 15 churches, one public elementary, a junior high, and a senior high school.

In 1870 Sidney Mason built the first hotel and Horace Clark had the first blacksmith shop. In 1871 two more hotels were built and there were five blacksmith shops. W. H. Weeks started a lumber yard in 1870 and before 1872 there were two more. Also in 1870 George Cross started the first newspaper, calling it The Fairbury Gazette. A number of newspapers came and went through the years, with the present paper being The Fairbury Journal-News.

All this activity was spawned by the political reorganization this area was going through at the time. Originally identified as Jones County, it was joined with Jefferson County to its west in 1867. When the counties redivided in 1871, the name, "Jefferson," and early documents were taken by the eastern county. The newly organized town of Fairbury was chosen as county seat over Meridian. Fairbury was made a station on the St. Joseph & Denver City Railroad that was built through the county at that time.

In 1873 a fire-proof building was erected for use as a courthouse, the first brick building in Fairbury. A "proper courthouse" was built on the public square in 1892. Stonecutters from England were employed for the job. When the structure was completed the old one was sold. It still houses a business on the south side of the square. Fires on three occasions caused extensive destruction. In 1903 all the businesses on the south side of the square burned, with the exception of the old courthouse-building.

Cropsey & Champlin Mill, built in 1874, was water-powered and cable driven from the Little Blue River. In 1874 Col. Thomas Harbine, a capitalist from St. Joseph, Missouri, established the first bank. By 1911 Fairbury had four banks. It is presently served by four banks. By 1874, just five years after the birth of Fairbury, there were 44 businesses and a population of 600.

In 1886-87, when the Chicago, Rock Island & Pacific Railway line was built from Kansas City to Denver, Fairbury became a division point with an 18-stall roundhouse and rail yards. Nearly 500 people were employed here by the Rock Island in its peak years.