Photo: Millionaires Row Historic District, corner of West Fourth and Walnut Streets. The District was listed on the National Register of Historic Places in 1985. Photographed by User:Pubdog (own work), 2011, via Wikimedia Commons, accessed October, 2012. 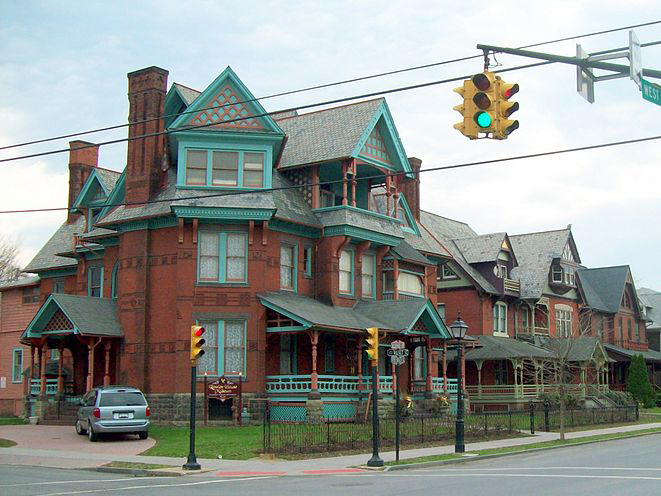 The Millionaire's Row Historic District was listed on the National Register of Historic Places in 1985. Portions of the content on this web page were adapted from a copy of the original nomination document. [‡]

The Millionaire's Row Historic District is an irregularly shaped area, centrally located in the City of Williamsport. The District represents a contiguous residential area exhibiting almost no topographical change in its land area. Evident at a number of junctions in the District are small (two or three buildings) concentrations of commercial uses. There are 289 total buildings in the District (102 significant, 161 contributing and 26 intrusions).

The District is almost entirely residential property of Victorian style architecture. Nearly all of the streetscapes are intact throughout the District. Most of the intrusions are in the form of modern infill construction necessitated through the years by fire and other causes. The percentage of significant structures in relation to total structure is very high. One significant open space, Way's Garden, is an excellent contribution to the District in its appearance and location. Way's Garden was created in 1913 as the result of a demolition of a large Italianate-Gothic House and the new park was donated to the City.

The general condition of the District is deteriorating. The majority use of the buildings has become multi-family rented property. This is due primarily to the size of the former single family houses that predominate the building stock of the District. Unfortunately, this change in us has fostered a maintenance problem with respect to the District. This problem is beginning to turn around through preservation, education, financial, and technical assistance.

The specific styles of architecture apparent in the Millionaire's Row Historic District are all of the latter half of the 19th century and early 20th century.

Reflective of the times of the most prosperity, most structures were built between 1860 and 1920. Clearly, the distinction of the District lies in the presence of a rich variety of carefully designed and constructed mansions for the wealthy. The famed architect Eber Culver and contractor/builder Peter Herdic designed and constructed the most imposing and bold Second Empire homes. The boldness and power they display seems, not accidentally, to mimic the powerful financial empire and personalities of those who lived in them.

The Victorian Gothic style structures within the District tend to be eclectic, with definite exceptions: the magnificent Trinity Church and Parish House, the massive Weightman Block, both demonstrating the dynamic genius of the Culver/Herdic tradition; the Grace Church at Grace and Campbell Streets, and the First Church of Christ, Scientist on Maynard Street.

A good example of the Italianate a popular and impressive style of the Victorian era, is the home of the principle Williamsport builder of the period Peter Herdic. Designed by Eber Culver and built by Herdic, this 1856 Italianate structure was nearly destroyed by the removal of porches, addition of a commercial front, and utter neglect. It is now undergoing a complete restoration. Another fine example is the Herdic House, later Park Hotel, now Park Home. Originally a magnificent, almost legendary four story hotel produced by Culver and Herdic, the top two floors were destroyed by fire and remodeled in 1940. The house's ornate porches, wide eaves with large double brackets, rusticated quoins and tall windows with arched heads produce a rich visual display.

There are two examples of Colonial Revival, a style seldom seen in Williamsport, on West Fourth Street. They are the McMinn-Bowman-Mosser House and the H. Mellick Foresman-Dr. Brier House. The latter ostentatiously projects a two story portico with colossal column in the Ionic order while the former shows the broken swan's neck pedimented large central dormer typical of the style. Both combine various contemporary and Colonial elements to add a conspicuous change of character to the community. Neo-Classicism, a style based on primarily the Greek and to a lesser extent, the Roman orders, finds expression in the J. N. Kline House at 519 W. 4th Street. The symmetrically arranged structure with colossal portico is one of the few examples of this design in the city.

The two fine examples of the Victorian Romanesque are less than a block apart: the Foreman-Kay-Costello House built by William Emery and the Covenant Central Presbyterian Church. These massive and elaborate structures are a credit to the artists who designed and built them. Both are in excellent condition and integrity both inside and out.

The Millionaire's Row Historic District represents the pinnacle of Williamsport's social, economic and cultural history. The district was constructed during the most prolific economic period in the City's history and capsulizes the City's built environment. The size, scope, and elaborate workmanship apparent in the structures of the district are excellent reminders of the 1850 -1920 era of prosperity.

Williamsport's strength was founded on the logging industry in the late 1840's, however before this era, the town existed only as a crossroads community of less than 2,000 people, as a stop along the Pennsylvania Canal and as a marketing point for the numerous small farms of the area. In 1847, the potential for the logging business took a great leap forward with the establishment of the first "Log Boom" in the Susquehanna River. The west branch of the river from Linden to Halls Station was referred to as the "Long Reach," which was an area of almost no fall in the elevation of the riverbed. This provided an ideal point to locate a log boom, which was a series of river piers with heavy chains strung between them used to catch the slow moving logs as they came down the river. This fostered the development of an entire series of related lumber processing sites in Williamsport that included log cribs and ponds, sawmills, storage and rail yards.

The lumber industry began its significant growth in Williamsport during the 1860's, as the city began to exert its location dominance on the timber resources of the West Branch Valley. The impact on the town was dynamic; between 1860 and 1870, Williamsport's six major railroad lines arrived and the population tripled. By 1886, there were 28,000 inhabitants of the city. Various resources and industrial reports also reflect the growing boom in the economy -- in 1862, 196,953 (37,853,621 board feet) logs were brought to Williamsport, and by 1891 that figure had jumped to 1,816,562 (262,017,394 board feet) logs.

It was on the base the "Lumber Barons" established their fortunes and subsequently built their spectacular homes. There were two main locational cores for these homes; along East Third Street (from Mulberry to Penn Streets) and along West Fourth Street (from Elmira to Seventh Avenue). The West Fourth Street area and its adjacent neighborhood along West Third Street eventually became preferred over East Third Street, as the land lots were bigger and there were more available land for additional residential expansion. The East Third Street area remained a fashionable neighborhood well into the Twentieth Century, however, numerous demolitions and commercial development has nearly erased all vestiges of this former use.

West Fourth Street developed along what was known as the Jersey Shore Road, which was largely farmland before the Civil War. There were a few large farmhouses which fronted the road at this time, the best known, perhaps, was the residence of Judge J. W. Maynard. This was a large, brick, two-story vernacular-Georgian house, with a recessed two-story porch along half the front facade. This structure was destroyed by a fire in 1960 and the site is now occupied by a modern building belonging to the Lycoming County Historical Museum.

Homes belonging to the Williamsport elite began appearing along west Fourth Street in the 1850's, the first of which was an Italianate-Gothic house built for Judge James Armstrong, formerly located in the site of the present Y.M.C.A. (southeast corner of Elmira and Fourth Streets.) However, the earliest surviving residence from the lumber era is the Italianate house of Peter Herdic, built in 1855 (407 West Fourth). Herdic himself was one of the premier influences on West Fourth Street and Williamsport in general. Along with his architect, Eber Culver, Herdic was responsible for such structures as the A. D. Hermance House, the Weightman Block, and the "Herdic House" located at the intersection of Campbell and Fourth Streets, which is considered the center of the district. The Herdic House (now known as the Park Home) was a four-story, brick, Italianate Hotel that served the well-to-do guests of Williamsport. Directly behind the hotel was the Pennsylvania Railroad Station, which Herdic was able to locate there in order to service his hotel and restaurant.

Among the lesser known architects working in the district include Amos Wagner, a local architect, and Isaac Hobbs of Philadelphia. A well known Wagner building is the large Queen Anne style house at 335 Maynard Street (c. 1885). Two surviving Hobbs buildings are the Smith-Ulman House (634 West Fourth Street), which remains its original Second Empire detail, but has been severely damaged by sandblasting and the Mussina House (1022 West Fourth Street) completed in a very modest Eastlake style.

As a whole, the Historic District was never exclusively residential or totally upper class. Indeed, Fourth Street, which was dominated by homes of the Millionaires, was a mixed bag of uses that include the previously mentioned Herdic House and Weightman Block, the August Leadlein Confectionery Store (Fourth and Walnut Streets), a boarding house (Fourth and Locust Streets), Chaapel's Florist Shop and Greenhouses (906-912 West Fourth Street), and a number of large churches. Generally speaking, houses located on West Third, Grace, Vine, Park, Maynard, Campbell, Walnut, Locust, and Center Streets were smaller and were not as embellished in their architectural styles as those on West Fourth Street, but nonetheless, contained many families of note.

The building stock within the district is almost completely of Victorian or post-Victorian extraction. Earlier Federal and Greek Revival styles are non-existent, although the adjacent downtown business district once contained a good sampling of structures from these eras. Very few houses can be purely defined as a particular style, as most are eclectic forms that derive elements from two or more styles. Among the more pristine examples are as: follows:


The decline of the West Fourth Street area can be indirectly traced to the decline of the lumber business in Williamsport. In 1889, the Susquehanna River flooded its banks and caused considerable damage to the lumber facilities located in the city. This, coupled with the declining timber resources, signaled an end to the traditional economic base, although the lumber business remained until the early 1900's. Many "Old Line" families continued to live in the West Third and West Fourth Street areas well into the twentieth century, although a definite migration to the Vallamont and Grampian Hills sections of Williamsport was starting to occur. A severe impact on the Historic District came about after the 1936 flood of the Susquehanna River, which underlined the vulnerability of the area to natural disaster. This, added by the demand for apartment space created by the establishment of the Williamsport Technical Institute (now Williamsport Area Community College), in the 1940's. (Located on West Third Street), caused many large homes to be subdivided for rental space.