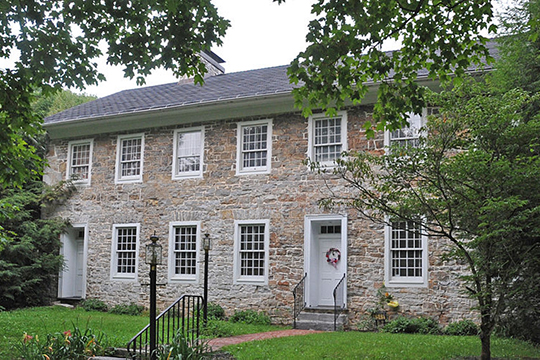 The county was first visited by settlers in the 1740's. The first settlers in Blair County established themselves in the valleys, well away from the major Indian trails so as to avoid attack. At the time, an Indian trading post was established along the Kittanning Trail in an area now known as Frankstown. This was the region's first true form of economic development. The Kittanning trail was used as a route by the Indians to travel from the Susquehanna River to the Allegheny River. The popular trail traveled through parts of Cumberland, Perry, Huntingdon, Blair, Cambria, Indiana, and Armstrong Counties until it reached the town of Kittanning, the largest of the towns along the route.

By the 1840's, Hollidaysburg, Williamsburg, Martinsburg, Newry, East Freedom, and Claysburg had joined Frankstown as early centers of trade in Blair County. Hollidaysburg, in particular, grew rapidly through the 1830's due to the establishment of the Pennsylvania Mainline Canal. Hollidaysburg served as the connection point for the transfer of goods between the Mainline Canal and the Allegheny Portage Railroad. The Mainline Canal and Allegheny Portage Railroad connected industry and commerce from Philadelphia to Pittsburgh. Today, this site symbolizes western expansion over the Allegheny Mountains.

Blair County was formally established as a county in 1846 and named after John Blair, a farmer, businessman, and state legislator that lobbied for the establishment of the county. The development of Blair County is tied to natural resource industries and the development and expansion of transportation systems that enabled commerce in those industries. Agriculture, timber, iron, coal, lead, and zinc are among the natural resources that enabled small communities in Blair County to prosper in the early years.

Frankstown, Hollidaysburg, Martinsburg, Newry, East Freedom, and Claysburg were early centers of agriculture, transportation, iron mining, and smelting. Mills, blacksmith shops, iron foundries, tanneries, iron furnaces, and refractories are found throughout the county and represent the early stages of Blair County's development. The county is also home to Amish and Mennonite farming communities that established themselves in Sinking Valley and Morrisons Cove.

The first furnace for iron production was the furnace in Mount Etna, established in 1805. During the next fifty years, iron furnaces became a strong economic engine for the county. By 1855, the County had fourteen furnaces, twelve forges, one rolling mill and seven foundries. The availability of the natural resources of iron, limestone and wood for charcoal fueled the iron industry, but overcoming the physical challenge that the Allegheny Mountains presented to transportation stimulated other, longer lasting economic activities.

Transporting goods from the canal in Hollidaysburg over the mountains of the Allegheny front resulted in the construction of one of the greatest engineering feats of the day. Inclined planes were built to haul canal barges up the steep mountain slopes to be connected to a portage railroad ending in Johnstown. By 1850 the inclined plane was rendered obsolete when and innovative mountainside rail passage, called the Horseshoe Curve was built. This engineering feat created the gradual grade for the construction of a major rail corridor. Trains could now directly carry goods and passengers over the Mountains.

The local iron industry declined with the development of larger and more efficient methods of production in Johnstown and Pittsburgh. The invention of the Bessemer process, the use of coal for fuel, the availability of ore from the Great Lakes region, and the growth of the railroad to expedite the transportation of materials closed the local iron industry.

Altoona, and Tyrone to a lesser extent, blossomed around the Pennsylvania Railroad Middle Division. Altoona was incorporated as Blair county's only city in 1868. The initial necessity of fueling and repairing trains to traverse the Allegheny Mountains expanded through the next 100 years into a major steam locomotive and rail car design, production and repair facility. Internationally know for establishing engineering and industrial standards through its testing facilities, the Pennsylvania Railroad supported training and education for the skilled trades. The resulting pool of generations of skilled craftsmen and mechanics helped develop a strong manufacturing economic base in the County.

The growth of the automobile industry, the interstate highway system, truck transportation, and the replacement of steam engines with diesel electric locomotives resulted in diminishing the role the railroad plays in the local economy. The railroad mainline and diesel electric locomotive repair facilities currently play a smaller role in the more widely diversified Blair County economy.