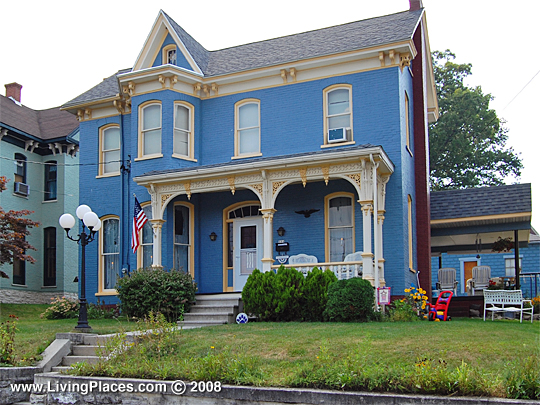 Roaring Spring was established around the Big Spring, a clean and dependable water source vital to the operation of a paper mill. Prior to 1866, when the first paper mill was built, Roaring Spring had been a grist-mill hamlet with a country store at the intersection of two rural roads that lead to the mill near the spring. A grist mill, which was powered by the spring water, had operated at that location since at least the 1760s. After 1867, as the paper mill expanded, surrounding tracts of land were acquired to accommodate housing development for new workers. The formalization of a town plan, however, never occurred. As a result, the seemingly random street pattern of the historic district is the product of hilly topography, a small network of pre-existing country roads that converged near the Big Spring, and the property lines of adjacent tracts that were acquired through the years for community expansion. The arterial streets of the district are now Main, Spang and Bloomfield, each of which leads out of the borough to surrounding townships. Two of these streets — Spang and Main — meet with Church Street at the district's main intersection called "Five Corners." The boundaries of the district essentially include those portions of Roaring Spring Borough which had been laid out for development by the early 1920s. This area encompasses 233 acres or 55 percent of the borough's 421 acreage. Since the district's period of significance extends to 1944, most of those buildings erected after the 1920s were built as infill within the areas already subdivided by the 1920s. In the early 1960s, the Borough began to annex sections of adjacent Taylor Township, especially to the east around the then new Rt. 36 Bypass.

Daniel Mathias (D. M.) Bare laid out Roaring Spring's first 50 building lots in 1865 after he and two partners decided to locate the region's first paper mill near the spring. These lots were located within and around the so-called village "triangle" defined by West Main, Spang, and East Main Streets. By 1873, the borough contained about 170 lots and 50 buildings, which included the paper and grist mills, three churches, a company store, a schoolhouse, and one hotel. The population stood at about 100. The triangle remained the industrial, commercial and retailing core of the town until 1957 when the bypass of Main Street, the former PA Rt. 36, was built to the east of town through Taylor Township. As is true of many American small towns, many village merchants along with new businesses have since relocated to the new highway. The village core retains only a few shops and professional offices, but still holds the Roaring Spring Blank Book Company and Spring Water Bottling Company, all of the historic church buildings, the public library, the borough building, the post office, and the elementary school (former junior-senior high school).