Photo: Home at the corner of 10th Street and Lincoln Avenue. Photographed by User:Smallbones (own work), via Wikimedia Commons, accessed June, 2013, public domain. 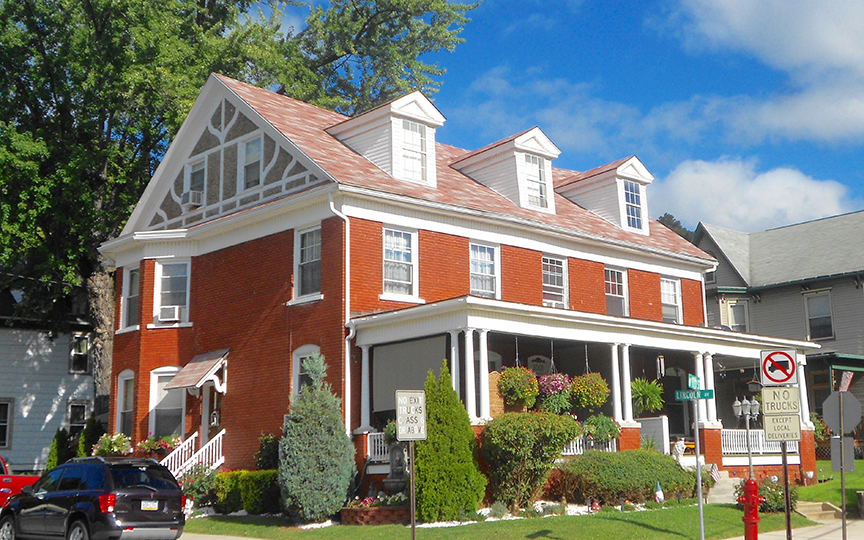 Tyrone Borough is located at the intersection of Routes 220 and 453 at the pass separating Brush and Bald Eagle Mountains, through which flows the Little Juniata River on its way to Huntingdon Borough, the Huntington County seat.

The borough of Tyrone is situated in the southeast part of Snyder Township near the Huntingdon County line. Captain Logan, the Indian chief, and members of his tribe lived on the site of the borough near the large spring in the business section of the town. Tyrone owes much of its prosperity to the Pennsylvania Railroad, just as does Altoona, but it was primarily a center for the iron industry. John Gloninger, thy Lebanon County iron master, secured much of the land in the present borough early, in the Nineteenth Century and began the development of forges there. Gloninger's Company was succeeded by Lyon, Shorb & Company, and it is interesting to note that very little of the land controlled by them was devoted to agriculture. Elisha Davis did have a farm on part of Gloninger's tract in the upper part of Tyrone, and, also ran a small sawmill on Sinking Run before 1826. After that the company of William M. Lyon bought the property and built a log house and large barn upon it. John Henderson, Philip Hoover and Samuel McCamant all lived there, the latter after improvements had been made to the property. Jacob Burley lived in a small cabin within the limits of the present borough and a log school building stood at the corner of Main and Allegheny Streets. The first business house in Tyrone, after the town was laid out in 1849, was that of Burley & Stewart, merchants. Jacob Burley and Rev. John D. Stewart were the members of the firm. Joshua Burley erected the Central Hotel in 1852. In 1853, Edwin L. Study, Pius Sneeringer and Samuel Berlin, on their way west from Adams County, stopped at Tyrone and decided to remain there. These men devoted themselves to developing the community and Mr. Study became particularly prominent in connection with the Blair County Banking Company of which he was president. Berlin was a pioneer druggist and Sneeringer an active merchant. The Methodist Episcopal congregation erected a church in 1852, and in 1853, Presbyterian and United Brethren Churches were built.