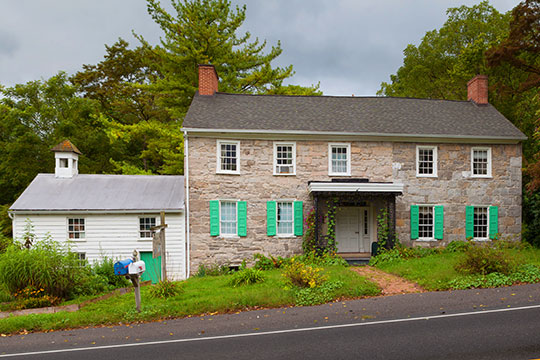 Early on called "Woodberry," the township was a Bedford County Township prior to the formation of Huntingdon County in 1787. From the latter year until the erection of Blair County in 1846 it was part of Huntingdon. When Huston Township was formed in 1842 part of the original 'Woodberry' was placed under Huston. Tussey's Mountain rises on the east of the township and Lock Mountain in the west, Woodberry is another of the townships to have the agricultural advantages afforded by the fine land in Morrison's Cove. Iron ore and ganister rock are valuable natural resources. Clover and Piney Creeks afford water for manufacturing and agriculture. Huntingdon County touches it on the east Huston Township on the south, Frankstown on the west and Catharine on the north. In 1788, the officers of the township were Philip Walker, constable and Jacob Server, assessor. Before 1765, there were no settlers in this region. People moved in between the French and Indian Wars and the Revolution. As in other sections of the Cove these people were the victims of horrible Indian perpetrations and massacres. It has been estimated that more than 50 families lived in the vicinity in 1788. Their names are German in many cases. [1]

The Daniel Royer House, built by the Royer family about 1810; John Royer settled in this area around 1805. Along with his brother Daniel, he established an iron furnace one-quarter mile to the south on Piney Creek. The house remained in the Royer family for a number of generations. [2]) The Royer house was entered onto the National Register of Historic Places in 1975.