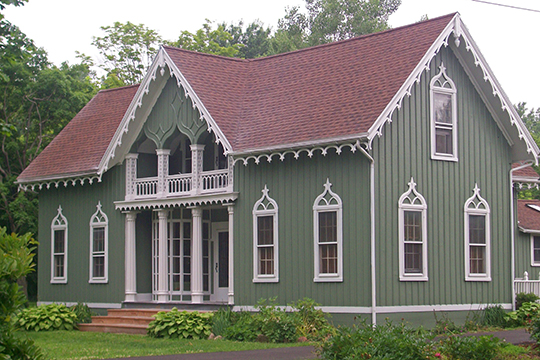 The name Genesee is of Seneca origin, signifying "pleasant valley."

In early colonial days all of Western New York was called Tryon County, then Montgomery; after 1788, when the preemption line was agreed upon, the territory west of that was called Ontario; after the western bounds of the Phelps and Gorham purchase were determined the portion of the State west of it was called Genesee County. The county was established in 1802 as Genesee, embracing what is now eight counties. In 1801 Joseph Ellicott erected the land office of the Holland Land Company at Batavia, and this became the center; its judicious selection on the main Indian trail, and in the direct path of emigration, with its natural advantages and surroundings, has rendered Batavia one of the wealthiest and most beautiful villages of Western New York. Counties were erected from the original Genesee as follows:


Genesee, in its present organization, retains the original county seat, Batavia, with history and importance sufficient to almost render it classical. It has been and is the beehive of industry and facts from which those counties and colonies have swarmed.

Prior to the erection of the counties named above Genesee was divided into four townships: Northampton, Leicester, Southampton, and Batavia. Northampton embraced the northern portion of Morris Reserve, Leicester the central portion, and Southampton the southern; Batavia embraced the entire Holland Purchase.