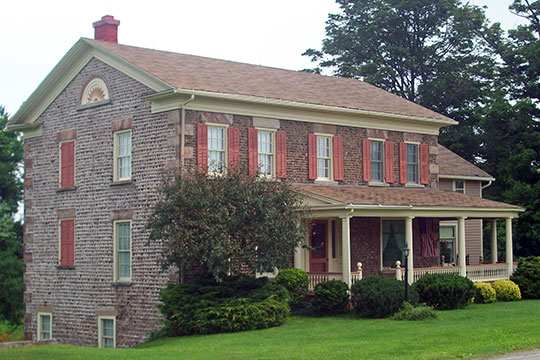 Orleans County was set off from Genesee November 11, 1824. The town of Shelby was annexed from Genesee county in 1825.

Soon after settlement of the county, large asheries were built; large quantities of wood ashes, produced in burning the log heaps in clearing land, were a source from which money could be made easier than from raising crops. The ashes were leached in rude leaches; the lye obtained was boiled down to a semi-solid state, called black salts; and then sold to Mr. James Mather, or some owner of an ashery, who put the salts through the processes of making potash, or pearlash, a refined kind of potash, the use of which is now superseded by saleratus.

Before the Erie Canal was operating, merchant goods were brought by water, by way of Lake Ontario or on wagons from Albany. Robert Hunter and brothers, of Eagle Harbor, were teamsters who traveled to and from Albany with large teams of horses to wagons and brought in most of the goods used here for a number of years before the opening of the canal.