Photo: Home in the Berlin Historic District, Berlin, NJ. The Historic District was listed on the National Register of Historic Places in 1995. Photographed by user: Smallbones (own work), 2013, [cc-by-3.0 (creativecommons.org/licenses/by/3.0)], via Wikimedia Commons, accessed July, 2017. 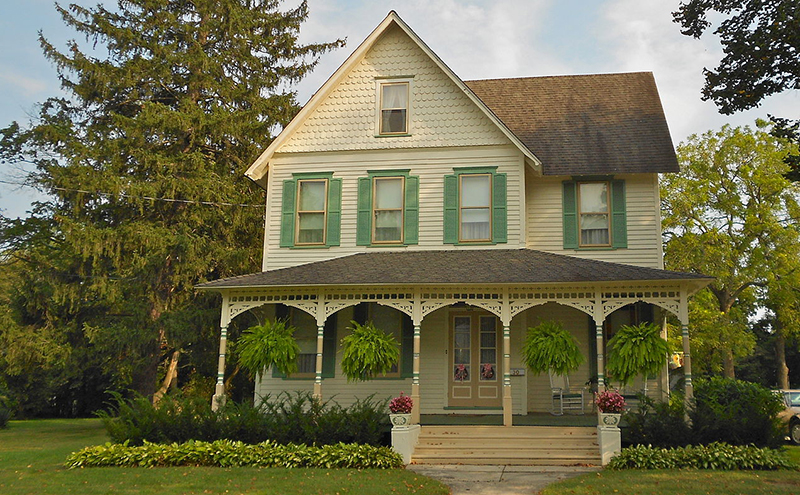 The Berlin Historic District‡ was listed on the National Register of Historic Places in 1995.

When the Camden & Atlantic Railroad reached the village of Long-a-Coming in the mid-1850s, it spurred the development of a community that was renamed "Berlin" in 1872. The sparse commercial core along main street (White Horse Pike) expanded and a period of new home construction ensued in a subdivision laid out by the Railroad's real estate entity, the Camden & Atlantic Land Company. Though the subdivision was planned to flank both sides of the rail line, building activity concentrated on the south side of the tracks, between the railroad and the White Horse Pike. Along with several important early resources along the White Horse Pike, this neighborhood of nineteenth and early-twentieth century houses displaying a wide range of domestic architectural styles forms the Berlin Historic District. Because the Berlin Historic District illustrates Berlin's emergence into the suburban community it is today and because it contains the Borough's collection of Victorian homes and several individually noteworthy resources, it is eligible for the National Register of Historic Places. The period of significance for the Berlin Historic District begins in 1853 with the advent of the railroad and terminates circa 1925 after which development is more closely aligned with the automobile age.

Long-a-Coming was the oldest village in Waterford Township which was part of Gloucester County until Camden County was formed in 1844. Its unusual name has been attributed to both Indian origins and a tale of seventeenth-century sailors traveling wearily and thirstily from the coast to Philadelphia until they reached a stream that was "long-a-coming." The stream, being the main branch of the Great Egg Harbor River, and the area's relatively high ground made Long-a-Coming an ideal place for early settlement. Its location halfway between Absecon and Philadelphia also made it a logical respite for travelers. In 1714 Peter Rich and Richard Moss surveyed the land and small farms developed. Samuel Scull opened a tavern as early as 1760 and in 1773, William M. Carrell started the first stage coach route, extending from Great Egg Harbor to Philadelphia. The route began in Abseekam (Absecon) once a week on Monday mornings and traveled along what is now known as the White Horse Pike, through Blue Anchor to Long-a-Coming, and then on to Haddonfield, arriving at the Samuel Cooper Ferry on Tuesday afternoon. By 1830, a mail stage from Philadelphia to Somers Point passed through Long-a-Coming twice a week. This activity led to the establishment of four taverns by 1835, two of which — Wright's Tavern (the Joel Bodine House at 161 South White Horse Pike) and the Berlin Hotel (178-84 S. White Horse Pike) are located in the Berlin Historic District.

Along with farming, other industries active at the time were tanning, charcoal and cider manufacturing, blacksmithing, and nearby glass factories. But lumbering became the most important late-eighteenth/early-nineteenth century industry. By the mid-1830s, commercial and residential development was concentrated along the White Horse Pike, from the cemetery at the northwest end of the village to the intersection of the Pike with Tansboro, Jackson, and New Freedom Roads at the southeast end. In the 1840s Long-a-Coming was a contender to serve as the new county's seat, but lost to Camden. From that time until the advent of the railroad, the village's growth was unremarkable.

The single track of the Camden & Atlantic Railroad, the first line to link Philadelphia — via the ferries — and the Jersey shore, reached Long-a-Coming in 1853. The Railroad formally opened one year later, built a station at Long-a-Coming in 1856, and operated for a little more than a century. (The original station survives but is separated from the Berlin Historic District by considerable open space and new construction where industry once flourished.) Trains initially ran once each day from Cooper's Point to Absecon Island and back. They not only provided an inducement for people to take up residence in the healthy suburb, but also stimulated farming activity as fruit easily could be shipped to markets. This growth in town and in its outlying areas in turn brought more business to the commercial core along the White Horse Pike.

Jacob Leach, owner of the Berlin Hotel from 1835-53, played an important role in the residential development associated with the railroad era. Between 1846 and 1852 he assembled parcels of land along what are now E. Taunton and Washington Avenues and soon thereafter sold a half interest in his land to the Camden & Atlantic Land Company in 1853 which laid out lots for sale. The Camden & Atlantic Land Company planned a grid of streets parallel and perpendicular to the White Horse Pike and the railroad. The land was divided into rectangular lots ranging from 40 to 100 feet wide by 175 to 275 feet deep. The original plan called for development on both sides of the rail line and smaller lots in closest proximity to the depot. Other than a scattering of late-nineteenth century dwellings to the north of the rail line, residential development concentrated to the south, between the rail and White Horse Pike. As to the small lots fronting the railroad, they were utilized for industry — a coal yard and an ice plant — while a lumber yard operated at what is now the corner of Jefferson and Hamilton Avenues. The coal yard and ice plant at the corner of E. Taunton and Jefferson have since disappeared and been replaced by modern housing. The remains of the lumber yard are encased in a much altered and expanded industrial complex beyond the Berlin Historic District's limits. The Land Company and Leach — and later his widow — sold the parcels individually and in groups throughout the remainder of the century.

The Camden & Atlantic Land Company's Map of Building Lots of 1855 suggests that they had planned to develop the area now called Haines Avenue as Oak Street. However, this happened otherwise. The land that now forms a portion of this street previously belonged to the sizable plantation connected with the Joel Bodine House, an eighteenth-century tavern at 161 S. White Horse Pike. After a succession of owners, Joseph C. Smith subdivided the land and sold the lots. Haines Avenue opened as a public street after the sale of lots began about 1855-60. (Wright, unpublished manuscript) Construction on this street generally post-dated that of Washington and E. Taunton Avenues. Building activity throughout this early neighborhood was aided by the formation of building and loan associations, the first one having been organized in 1868. By 1886 the population had grown to 500 inhabitants.

Of interest in the Berlin Historic District is the socioeconomic and architectural heterogeneity that characterized the early residential neighborhood. This is unlike other Victorian railroad suburbs such as Merchantville and Moorestown where there are more distinct sections of working class versus middle or upper middle class housing. Washington, E. Taunton, and Haines Avenues were home to carpenters, physicians, merchants, bookkeepers, laborers, clerks, and many other occupations. Several residents were employed by the railroad: carpenter, operator, signalman, and assistant secretary. (Census Reports, 1910) Architecturally, the range of income levels is suggested by the streetscapes which are lined with modest Victorian cottages such as 14 and 18 Washington Avenue and prestigious Italianate homes such as 21 and 27 Washington Avenue.

Most of the early families in Long-a-Coming were of English descent. The Presbyterians were the first denomination to organize. Their congregation apparently became extinct after the Revolutionary War, then was revived in 1863 when the building activity and influx of new residents was underway. (Prowell 1886:662) The Methodists of Long-a-Coming organized soon after 1830 and have worshiped in their Neoclassical church on the White Horse Pike — within the Berlin Historic District — since 1867. The 1860s was also the decade in which the Baptists formed a congregation. Their earlier edifices were located on the corner of White Horse Pike and East Broad Avenue; their extant church, erected in 1963, stands at E. Broad and Haines Avenues as a non-contributing building in the district.

The Berlin Historic District also contains several non-residential structures along the best-preserved section of White Horse Pike. Among these commercial landmarks are two former taverns, the Joel Bodine House and the Berlin Hotel, and the former Berlin National Bank at the northeasterly corner of White Horse Pike and East Taunton Avenue. In the 1840s, that site had been chosen for the county buildings which ended up in Camden. This land, called "Smith's Field," was used for circuses and other entertainment at the turn of the century and an area butcher pastured cows here shortly before the bank was erected in 1910. (Wright 1979:74) The Old Town Hall at 131 S. White Horse Pike, erected in 1853 and used for many years as a school, anchors the westerly end of the district.

Architecturally, the Berlin Historic District contains a wide range of styles dating from the late eighteenth century to circa 1925. The clapboarded Joel Bodine House, a 1790s vernacular Georgian house/tavern, is a rare early survivor, one immaculately well-maintained. The Berlin Hotel, whose 1830s origins also predate the railroad, stands in a prominent location on White Horse Pike, on axis with E. Taunton Avenue. The building is a local architectural landmark for its circa 1870s Gothic Revival facade featuring steeply pitched and shingled paired cross gables. But the overriding character of the Berlin Historic District is that of a Victorian residential neighborhood of vernacular, Italianate, Second Empire, and Queen Anne houses interspersed with early-twentieth century forms such as the bungalow and American Foursquare, the greatest concentration of which is located on Haines Avenue.

The dwellings in the Berlin Historic District appear to be builder-designed, given variety and interest by various roof configurations: gabled, mansarded, jerkin-head, flat, hipped, and a hybrid mansard/gable at 6 E. Taunton Avenue. Millwork, too, contributes to the character of the district. Of note is the Gothic Revival porch with banded columns and ornate brackets on the James W. Peacock House at 21 Washington Avenue. In 1879, "Hiram Clifford, Berlin's scroll sawyer, has recently been getting a new jigsaw and new scrollwork patterns will no doubt turn out handsome things by the quantity." (West Jersey Press, 5 Nov. 1879) While a degree of millwork has been lost over the years, sensitive rehabilitation has restored the Victorian character of many of the houses. What has remained constant throughout the years is the integrity of the streetscapes as a whole. The Berlin Historic District contains only two vacant lots, one of which is a parking lot to the bank, and minimal modern construction within the boundaries of the district.

After 1925 Berlin witnessed a subsequent boom in residential construction and civic growth. New housing, typically bungalows and American Foursquares, concentrated in neighborhoods south of White Horse Pike (Thackara, Rich, and W. Broad Avenues) and Malan Avenue and North Franklin Avenue. That building activity, like much of that in Camden County at the time, reflected anticipation of and response to the Delaware River Bridge which opened in 1926. The automobile age also renewed the emphasis on the White Horse Pike as a transportation artery between Philadelphia/Camden and the Jersey Shore. During this distinct era of development, Berlin incorporated as a borough, erected a larger public school, and opened Berlin Park, all by 1929.

The Berlin Historic District reflects the resources and patterns of development that emerged primarily from the railroad era. It documents Berlin's transformation from a stopover point along a stage coach line to a suburban community with a civic, social, and religious infrastructure. The district does so with an assemblage of period buildings which as a group convey a place in time and merit listing in the National Register of Historic Places.

Lake, D.J. and S.N. Beers. Map of the Vicinity of Philadelphia and Camden. Philadelphia: C.K. Stone and A. Pomeroy, 1860.