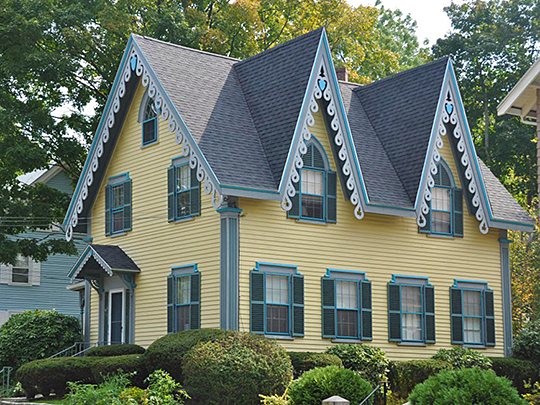 Winchester was settled in 1640 and incorporated in 1850. It was named, successively Woburn Gates, South Woburn and Black Horse Village. Its present name came from Colonel Winchester, a Watertown businessman who presented his municipal namesake with $3,000. Edward Convers, called "the Father of Winchester," erected a grist mill utilizing the power of the Aberjona River.

By 1860 three tanneries were in operation, and by the end of the century the manufacture of leather had become important. The Mackey Metallic Fastener Corporation, established in 1893, absorbed in time by the United Shoe Machinery Corporation, attracted many workers, causing a building boom. Today the town is largely residential, and only a few long-established factories continue to operate, producing leather uppers, gelatin, watch hands and felt products.

A prominent resident was Edwin Ginn, who founded the great schoolbook publishing house and made a million-dollar gift with which was created the World Peace Foundation. Another resident was Samuel McCall, editor, author of biographies of Thaddeus Stevens and Thomas B. Reed, and Governor of Massachusetts (1916-1919).

The Winchester Public Library, Washington Street, and Mystic Valley Parkway, a structure of stone and half timber, built in 1930, houses a small museum.

A marker at the intersection of Washington and Forest Streets identifies the John Harvard Land.