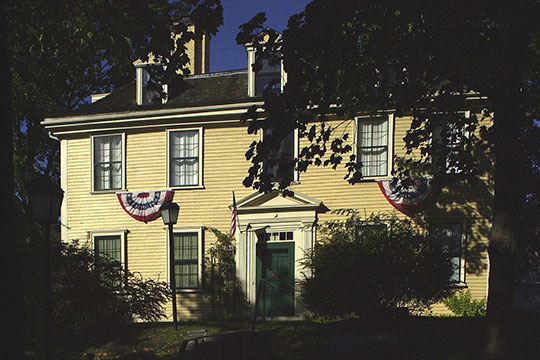 Chelsea was a city of transformations. Humbly beginning as a trading post, it was been successively a manorial estate, an agricultural community, a ferry landing, a summer resort, a residential suburb and finally an industrial city. In the 1930s its principal manufactures today are rubber, elastic webbing, boots and shoes, and paper stock.

In 1624, Samuel Maverick, a youth of 22, saw possibilities in a permanent trade with the Indians of Winnisimet, now Chelsea, and with some followers he set up his homestead, the first permanent one on Boston Harbor.

Ten years later he sold out his large holdings to Governor Richard Bellingham, one of the most extensive landowners about Boston. A leader in the political affairs of the Bay Colony, he must have been somewhat scandalously erratic from the Puritan point of view. Quite soon after his first wife's death, he married a woman betrothed to another man, performing the ceremony himself. When prosecuted for this breach of law and decorum, he, being a judge himself, refused to leave the bench, thereby trying and freeing himself.

With equal independence, he adopted a procedure with regard to his land which was not customary in New England. Dividing it up into four farms in manorial fashion, he leased out each quarter to a tenant farmer.

When in his 80th year the old Governor was gathered to his fathers, he left behind him as his final self-assertion a last will and testament that was to torment legal minds for a century to come. The contest over this memorable will had no parallel in the country, and tying up the property it effectively retarded the development of early Chelsea.

Though the original Bellingham purchase transformed Chelsea from a fur-trading post into an agricultural community, geographic location singled it out for another and more impressive function. Boston, particularly insular until after the Revolution, was reached by land from towns to the north by a route which entailed a whole day's journey. For north-country folk, the nearest point of mainland to Boston was Winnisimet (Chelsea) but a mile distant by water. Consequently, the General Court enacted a subsidy to encourage a ferry route between Boston, Charlestown and Winnisimet. This was the first ferry in New England and probably in North America.

The Court also kept an eye on the ferry business, regulating fares and schedules and imposing suitable penalties for neglect of duty. The convenience and safety of the passage was a matter of vital concern to these early legislators. The difficulties they themselves experienced in crossing are vividly described in Cotton Mather's diary: 'A fearful hurricane and thunderstorm overtook us, just as we got out of Winnisimet Ferryboat (a ferry three miles wide), which, had it overtaken us four or five minutes earlier, we had unquestionably perished in ye waters.'

The hazards of wind and tide often delayed travel; so, before long, taverns sprang up near the ferry, where, besides a night's lodging, 'strong waters' might be had to console or embolden the traveler. Throughout much of the nineteenth century Chelsea was a well-known summer resort, offering not only country landscape, but also three miles of beautiful sandy beach (later, City of Revere).

Paradoxically, the steam ferry made and then ruined Chelsea as a summer resort. The efficient operation of the Winnisimet Company made commuting to Boston possible. In a phenomenally short period, Chelsea's population passed the ten thousand mark. After a while, manufacturing and shipping usurped the waterfront; the residential section was pushed back from the sea, and congestion of population followed. Its rustic appeal gone, many of the older inhabitants packed up and went elsewhere. Many remaining commuters departed after the great Chelsea fire burned their homes to the ground.

A century's of up-building vanished in smoke on Palm Sunday morning, April 12, 1908. Because of a heavy gale, the flames spread with remarkable rapidity and within ten hours all buildings burned were in ruins. By nightfall the city was a devastated waste of smoldering embers: seventeen thousand four hundred and fifty people were homeless. It is said that in the entire burned area there was not enough combustible material left to start a kitchen fire.

In the reconstruction of the city, the business section was considerably enlarged and the population took on a decidedly cosmopolitan cast. About 1935, Irish Catholics, Jews, Italians, Poles, and Armenians represented over fifty per cent of the total population.