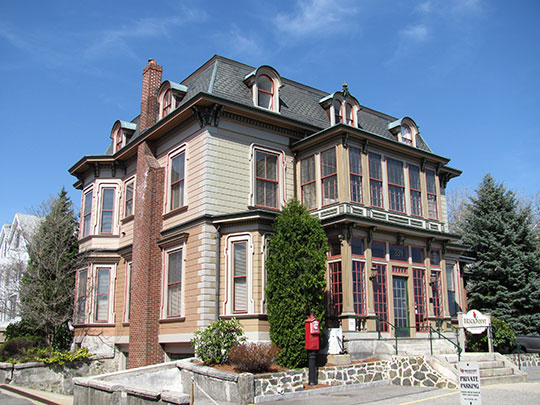 The settlers of Malden, mainly Puritans, landed at Charlestown (now part of Boston), situated in a part of the grant made in 1622 to Robert Gorges by the Northern Virginia Company. However, in 1628 the Council at Plymouth disregarded this grant and the subsequent lease and sold the land to the Massachusetts Bay Colony.

After the arrival of Governor Winthrop, in 1630, Charlestown grew rapidly and extended its boundaries. Within 10 years a few settlers had crossed to the north side of the Mystic River, built homes, and founded a new town. Upon the petition of a committee chosen from among these persons the General Court granted, in 1649, the charter. Malden's first free school was established in accordance with the terms of the will of William Gooden, who left a portion of his estate in trust for this purpose.

Difficulty was experienced in securing men competent to teach. More than once a hiatus occurred between the release of a schoolmaster and the appointment of his successor, so that on one occasion the town was presented at Court sessions on the charge of not maintaining a school. The first schoolhouse, built in 1712, saw only 18 years in the service of education; in 1730 it was sold to the town bellman and gravedigger. Private homes were again requisitioned for use as schoolhouses. Not until 1783, after much discussion and long delay, was the nucleus of the present school system created.

A company of soldiers known as the Malden band was formed shortly after the incorporation of the town. Citizens also organized a company of cavalry, which saw service in King Philip's War. On September 23, 1774, the townsmen voted to instruct Captain Ebenezer Harnden, their representative in General Court, that it was their "firm and deliberate resolution rather to rule our lives and fortunes than submit to those tyrannical acres of the British Parliament which pretends to regulate the government of this Province." This resolution was translated into action at the outbreak of the Revolutionary War.

By the 1940s Malden had become major manufacturing center where there were located nearly 150 factories of various industries.