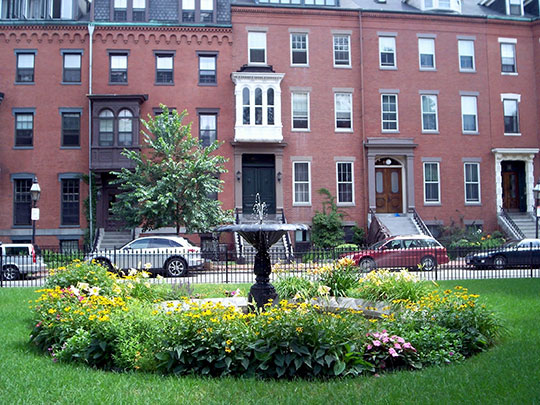 The South End Historic District was listed on the National Register of Historic Places in 1973. Portions of the content on this web page were adapted from a copy of the original nomination document. [‡]

Planned in 1848 and developed on filled land through the early 1870s, the South End of Boston is the largest remaining Victorian urban residential neighborhood in the United States. Seeking to provide a fashionable district of "substantial dwellings," the city auctioned the land of the South end with restrictions on height, material, setback, building form, and construction period. These lands were mostly purchased by real estate entrepreneurs who eventually sold completed dwellings catering to the tastes expected of businessmen and industrialists. As a result of this speculative construction, controlled by the City's specifications, the South End is characterized by an unusually high degree of architectural homogeneity and coherence. The houses of the South End represent the "genteel" architectural taste of the Victorian era — occasionally flamboyant in ornamentation but respectably conservative in plan and elevation.

This architecture did attract, as was hoped, the successful businessmen and manufacturers; however, when those Boston families of great wealth settled into the High Victorian houses of the Back Bay some 20 years after the South End plan, those buyers who could afford a second move followed. To the places of the exiting residents came the working class and immigrant population. The later development of more modest houses and apartment buildings reflected this change. It is significant, however, that despite the rapid turnover in population, the architectural environment of the South End remained of high quality and greatly cohesive, as can be seen in the surrounding streets lined with four-story brick rowhouses of uniform setback.

The foci of the South End are the urban squares of brick or brownstone row houses surrounding oblong parks. The squares reflect the appreciation of the English park system in the urban planning of Boston, extending back to Charles Bulfinch's design for the Tontine Crescent. The South End represents the last vestiges of the concept in Boston.

The first square to be completed (1857-1859), Union Park's grand scale made it one of Boston's most prestigious addresses for a time. The eventual building of the Cathedral of the Holy Cross on the axes of the park give to the square a notable vista.

The most cohesive and uniform of the South End squares, Worcester Square is also significant for its relationship to the Allen House at the entrance on Washington Street and to the Boston City Hospital at the terminus of Harrison Avenue.

Chester Square, built between 1850 to the mid 1860s, epitomizes the height of architectural taste in mid 19th century Boston. The townhouses of this, the largest of South End squares, are of a similar type to other South End residential structures, but are more grand and opulent in size and ornamentation. As a group, they show the most variety in style influences.

Although completed after Union Park, Blackstone and Franklin Squares were actually the first to be conceived. In 1801 Charles Bulfinch, as chairman of the Selectmen, presented a plan for a "Columbia Square" — four streets of houses facing an oblong lawn split by Washington Street. Franklin and Blackstone Squares deviate only slightly from this plan.

Styled after the larger squares, Concord and Rutland squares were developed during the 1860s. Less pretentious and smaller in size, they reveal the changing hopes for the South End.

Unlike most South End houses that were built on speculation, the Allen House was built in 1859 for the resident owner. The fact that Aaron Allen was a prominent furniture dealer illuminates the origins of certain exterior ornamental motifs. The conversion of the house from a single family dwelling to a clubhouse, upon Allen's move to the Back Bay, symbolizes the social changes of the district. Unusual in its homogeneous architectural fabric of the South End, the mansion commands an important position at the entrance to Worcester Square.

Completed in 1868 by M.M. Ballou, the St. James Hotel, as the Franklin Square House was originally named, was prestigious enough to attract the patronage of President U.S. Grant. It later became the home of the famed New England Conservatory of Music. Visually prominent among the smaller residential buildings, it defines one edge of Franklin Square.

The South End has been traditionally known for the large number of religious institutions serving the district. Because of the many Irish immigrants, the Roman Catholic Cathedral of Boston settled in the district supporting the congregation of the Church of the Immaculate Conception, whose Jesuit order founded Boston College. A considerable number of Protestant churches found elsewhere in 19th century Boston relocated to the South End with their congregations. Included among these congregations was that of the African Baptist Church of Smith Court which played an important role in the Abolitionist movement. This congregation was located in the People's Baptist Church, formerly St. Paul's Baptist Church. Through the years, the religious structures have housed congregations of all faiths. Architecturally, these churches provide focal points along the major avenues and contribute a variation of form, style, and color to the residential blocks.