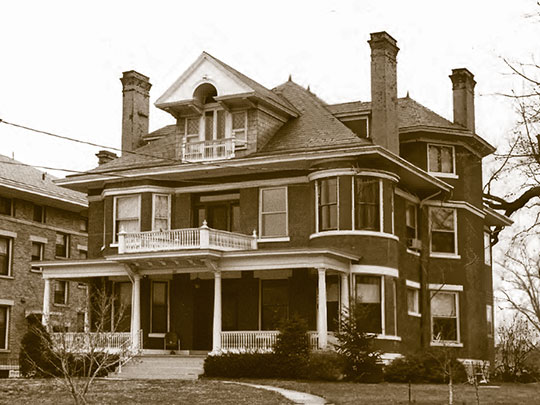 The Wallace Woods Area Residential Historic District was listed on the National Register of Historic Places in 1983. Portions of the content on this web page were adapted from a copy of the original nomination document. [‡]

The Wallace Woods Historic District is an almost exclusively residential neighborhood located between the built-up urban northern part of the City of Covington and the outlying, less consistently developed area to the south. Covington is located on the south side of the Ohio River opposite Cincinnati, Ohio, and along the west bank of the Licking River (opposite Newport, KY, on the east). The city was laid out in 1815 and incorporated in 1834. It gradually developed southward into the Licking River valley, and eventually up onto the hills surrounding the valley on the south and west. Until 1907 Covington itself officially extended south only to the north side of this Wallace Woods area. The boundary was along what was known as the "Corporation Line," although a considerable area south of that line had been incorporated as the independent City of Central Covington in 1894. This area had been mainly occupied by three fine farms, located on ridges divided by the ravines of creeks that met and emptied into the Licking. The farms were developed in the 1830s by three wealthy mercantile families from Cincinnati, essentially as rural residences. The 60-acre Wallace farm, whose boundaries coincided closely to those of the District, was subdivided by the heirs of Colonel Robert Wallace, Jr., in the early 1890s; several fine residences remain from that decade. By World War I, the area had been further subdivided and almost entirely built up in its present form, except for a number of bungalows in the more modest eastern section. The original Wallace homestead's driveway became Wallace Avenue (approximately 21st Street), crossed by several of the city's main north-south thoroughfares, which are linked along the south by parallel Sterrett Avenue. The district extends from Madison Avenue—Covington's main commercial axis—east to the flood wall along the Licking River.

The Wallace Woods neighborhood was perhaps the most fashionable in the city from the turn of the century until the First World War, when many of those who earlier had moved to this suburban area from downtown along the mouth of the Licking and around the Central Business District again moved, this time out to the new suburban towns atop the nearby hills. Joining members of the original farm families in the Wallace Woods area at the turn of the century were many of the leading merchants, industrialists, financiers, and particularly attorneys in the northern Kentucky area, whose families, of course, included social and cultural leaders as well. The large wooded lots along the Wallace Avenue ridge attracted the more affluent residents, who naturally built impressive dwellings, many of them probably designed by well-known Cincinnati architects. These include outstanding examples of the Queen Anne or Shingle Style, a series of permutations of turn of-the-century Georgian Revival and cubic Arts and Crafts types, and several distinctive Swiss Chalets and half-timbered Tudor Revival dwellings (the latter including the present home of the Bishop of the Diocese of Covington). Around these grew up on the east, near Madison, a mix of commercial and multi-unit residential buildings. The side streets Sterrett, Scott, Greenup, Eastern, Oakland, and Glenway, most of them sloping fairly steeply down from the ridge as well as the lower eastern end of Wallace, developed with somewhat more modest versions of the mansions on central Wallace. There is an overall homogeneity of character in the district, as the styles and characteristic features of the larger houses were echoed throughout, combined with a gradual shift outward in the socio-economic level of the original residents. This is reflected by a gradual diminution in size, quality of material and craftsmanship, and degree of sophistication in design, although virtually all the buildings in the district are of a substantial nature and both well-designed and well-built. Variations on the bungalow, including a few built just after World War II, predominate in the eastern section of the district and as compatible infill elsewhere.

In spite of a dilution of status after World War I and more so after World War II, as the suburban drain continued, the Wallace Woods area remained respectable and fairly well-maintained, with a number of residents associated with nearby Holmes High School. In the last decade, however, the neighborhood has been revitalized, sometimes by residents or their families returning from the outer suburbs. This has led to a concerned and congenial neighborhood esprit de corps, expressed in an active neighborhood organization, many physical improvements, tours, and usually-appropriate rehabilitation of individual dwellings, often back into single-family or reduced-unit occupancy.

The early history of the Wallace Woods neighborhood is largely the story of three merchants from Cincinnati, Ohio. These merchants, who had intermingled backgrounds and shared interests, were the first to settle the area. Robert Wallace, Jr., and his neighbors Daniel Henry Holmes and Eugene Levassor, were successful in their business ventures, and were able to get away from commercial life and play the role of gentlemen farmers on their lands two miles south of the Ohio River. The land they settled lay between the Old Road to Lexington and the Licking River. The Banklick Road (along present Madison Avenue in this area), which had been used to supply Fort Washington from Lexington in 1790, was the only route to Central Kentucky until the completion of the Lexington Turnpike in the 1830s.

In 1840 Kenton County was created out of Campbell County and the county seat was established some ten miles south of Longwood on the Banklick Pike at Independence. This move, along with the completion of the Lexington and Covington Railroad, which skirted the west side of the estate, increased interest in the land south of Covington. The City of Covington, whose 1840 boundaries were only a mile south of the Ohio River at 12th Street, became concerned at the new development along its borders. In 1850 the city annexed all of the land east of the railroad as far south as the northern boundary of the Wallace Farm, which remained until 1907 the southern corporation limit.

In the mid-1850s Wallace laid out a subdivision on the northern half of his farm, which had become more attractive as home sites for people who wanted to enjoy the advantages of the city but avoid paying the urban tax rate, The economy failed and the subdivision (like his neighbor Levassor's to the south) was not a success, but Wallace sold some lots to a Sam Moore in 1855. Either Moore or Alf Allen who bought the land in 1860, constructed a large frame house on it and became the first outsider to live on the farm. In 1854 Wallace gave double lots adjacent to his farm on Greenup Street to his two married daughters, Mary Shillito and Lucy Neff. By 1859 John and Mary Shillito had built a Carpenter Gothic summer house on their lot so that they could spend time near her parents. This structure was extensively modified at the turn of the century but still stands at 2210 Greenup Street.

The house built by either Moore or Allen was sold in 1867 to John Zillifro Price, a Covington hat merchant. Price acquired 450 feet on the north side of Wallace Avenue to surround the home he named "Edgewood." In 1869 his daughter Belle married Charles Barrington Simrall (born 1843). C. B. Simrall was the Kentucky attorney for the Cincinnati Southern Railroad in its fight to acquire right-of-way through the state. He became a prominent railroad attorney who argued cases before the United States Supreme Court. Simrall acquired Edgewood with a three-hundred-foot frontage in 1883 after the death of his father-in-law, and probably enlarged the house. Edgewood (328 Wallace) was badly damaged by fire about 1918 and remodelled into its present form.

Robert Wallace, Jr., died in 1863 but the family continued to live in Longwood in the period after the Civil War. By 1867 horse-drawn street railways had been pushed to within a few blocks of the farm. Urban development was occurring in Central Covington, just west of the farms, and in South Covington at the junction of the Kentucky Central and Louisville Short-Line Railroads. The three farms provided a rustic break in the development, and the large beech grove on the Wallace farm just south of the end of Greenup Street became known as Wallace's Woods to the groups that sometimes picnicked there.