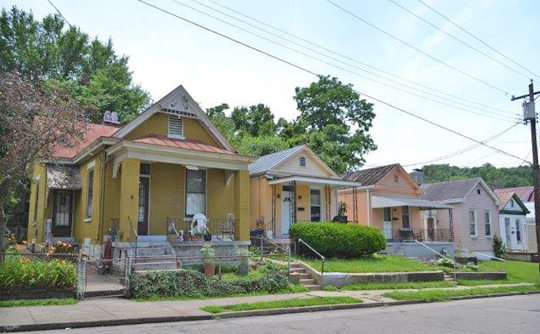 The Peaselburg Neighborhood Historic District [‡] was listed on the National Register of Historic Places in 2016.

The Peaselburg Neighborhood Historic District is locally significant in the Area of Planning and Community Development. Peaselburg, from its beginnings as a rural village, to its formation as a city and growth during the late-19th and early-20th century, to its annexation by Covington, tells the story of the dynamics played out across Kenton County, and indeed, the Commonwealth. The struggles of Peaselburg to act independently as a city, yet still benefit from the growth and development of Covington, mirror the rivalry/symbiotic relationship between Covington and Newport, and their often-fraught 19th-century relationship with Cincinnati, Ohio. Even as Peaselburg was absorbed into Covington, Peaselburg's identity and flavor persisted—an identity derived from its origin, topography, and social institutions. This is in no small part due to the strength and influence of Covington's numerous neighborhoods, most of which started as separate villages or planned developments.

Originally known as Silkyville, the area was settled by German Catholics, as well as a smattering of Irish families. The hills above the community housed the headquarters of Major General Lew Wallace during the Civil War, as part of his defense of the city of Cincinnati. Peaselburg was "little more than a small village of scattered homes" at this time.

The neighborhood's name has long been a source of both legend and consternation. During the late-nineteenth century, the geese freely roamed the area. The Low-German word for their droppings is "peasel," and given the high concentration of both fowl and droppings, someone from perhaps a rival part of Covington could have issued the name pejoratively. Another source claims the area was named after a German native with the last name of Peasel. Yet another origin story relates that a great many German families living in the area grew peas, and the name sprang from that crop. The odd name was frequently noted in local newspapers from the late-19th century; articles discussed "Goose Town," and referred to the area as "that rural village."

St. Augustine Parish, a major force historically in community life in Peaselburg, was established in 1870, as the fifth German-Catholic parish in Covington. The fortunes of the church are woven in tightly with the fabric and development of the neighborhood; the growth and various construction phases of the parish parallel that of the rest of the neighborhood.

By 1880, Covington was being described as "the most densely populated city in the country," and had settled into a comfortable relationship with adjacent Newport and Cincinnati. Internal discord still existed within Covington's neighborhoods, however, as neighborhoods sought to retain autonomy from Covington. Peaselburg, while prospering post-annexation, still managed to retain its identity even as it became part of the larger city.

Annexation was a contentious issue in Covington in the last quarter of the 19th century. A "fear of association" was shared among many of Covington's neighborhoods, and the prevailing sentiment seemed to be the retention of identity, plus an inherent distrust that the annexed areas would have to pay Covington's debt and even be subjected to additional "city dirt and pollution."

Peaselburg, already a small diffuse village, slowly developed into a small town. Thanks to the influx of mostly German settlers, the establishment of a parish, and creation of a public school, there were enough residents and pubic support that by 1880 it sought incorporation.

There isn't much suggestion in the newspapers of the day, while always tinged with a sardonic wit, that other areas were the butt of as many jokes as the former village of Peaselburg. At least once a week, the various weeklies and dailies contained a brief mention of Peaselburg, and often editorial notes were scathing. As long as Peaselburg contented itself with its own slightly rural character, Covington (or at least its representatives in the press) weren't threatened.

In June 1876, discussion in the local papers once again focused on Peaselburg's name and the prospect of it changing. Some citizens were lobbying for the name of "Wolfsburg" in honor of resident John Wolf, a former legislator. Objections noted in a news article included that the strangers moving in would "think the village was so named on account of the 'wolves' (bad boys) who make it a practice of inroading upon vineyards and orchards, stealing fruit and destroying shrubbery."

A December 30, 1879, article in the Daily Commonwealth reported that "the residents of Peaselburg propose to ask the Legislature to incorporate their burg at its coming session." The paper likely reflected the mood of Covington at large, as sly jabs continued at the neighborhood's march towards becoming a city, noting their (the paper's) suggestion for a new name "Jessetown" would be accepted. Peaselburg, perhaps gladly, surrendered its former moniker, becoming known as Central Covington in 1880. That did not wholly quiet the snubs from the press, as the Daily Commonwealth made clear in May 1880, writing "the citizens of Central Covington, late Peaselburg, indignantly deny all connection with the small city of Newport, although it is a fact that the former place was so incorporated as to lead all to think it an offshoot of Newport."

A June 3, 1880 article in the Daily Commonwealth noted that "the first city election of our new sister city, Central Covington, alias 'Peaselburg,' will be held next Saturday. Two full tickets are in the field, and friends of both are confident of success, of course. The officers to be elected are a Police Judge and five Trustees, who afterwards elect a Marshall."

Peaselburg incorporated as an independent municipality in 1880, changing its name to Central Covington. It was annexed by Covington in 1906, one of the many neighborhoods annexed by the larger city over the course of generations. Beginning in the late-19th century and continuing until 1930, overall growth in Covington and manufacturing interests in Peaselburg made the area ripe for residential development. Many streets show signs of speculative ventures in the form of repetitive house designs.

Throughout the 1890s, the sly asides in the newspapers continued, but with less frequency. Central Covington/Peaselburg improved its streets and roads, and development continued. There was great discussion about a possible annexation of Milldale (Latonia), but the city leaders voted against it. Milldale leaders wanted to secure their water supply, and Central Covington's main water supply was fed by Covington's waterworks.

The trustees decided against annexation, feeling that Central Covington/Peaselburg would "derive no benefits from the move, and that Milldale residents might outvote them in city matters." There wasn't a sense of solidarity among the small cities and neighborhoods in the Covington vicinity — "political autonomy was a matter of utmost importance in the sustenance of a community's character." Throughout Peaselburg's tenure as an incorporated city, it was treated as a part of Covington in the city directories—not as a separate community.

In 1895, Covington attempted to annex Central Covington/Peaselburg, but the effort failed. The community remained an independent municipality until 1906, when an erupted sewer line flooded the majority of homes and businesses in Central Covington.

Covington had begun actively campaigning for "annexation of it neighboring cities" under Mayor Rhein in 1906. Staggered by the damage, and unable to rebuild while maintaining the rest of its infrastructure, Peaselburg/aka Central Covington agreed to annexation by Covington in 1907 in exchange for rebuilding help.

Only a portion of Peaselburg is shown on the 1894 Sanborn map of Covington, and development is sparse along the block and a half of the four streets shown. Most dwellings are frame, single-family homes. By 1909, most of the neighborhood was platted, and with the infrastructure provided by Covington and the completion of St. Augustine Church in 1914, residential development soared.

The Italianate style house was widely popular in Peaselburg, with many simple house forms boasting a bracketed cornice or long, narrow windows with slight hood molds. Twenty-eight buildings in the district can be described as purely Italianate—and 25 of that number are located on Holman, Banklick, and Russell Streets. Incidentally, all but one of these buildings is a Covington-Newport Townhouse. The Charles E. Jackson House at 1617 Russell Street, is a good example of a frame Italianate dwelling in the district, with a simple bracketed cornice. The Granville S. and Mary Vallandingham House on Banklick Street illustrates the style in a 1‑1/2story brick form—again, the plan is that of a Covington-Newport Townhouse. The Vallandingham House has a bracketed cornice with frieze windows, and carved stone lintels over the elongated sash windows.

More than 200 dwellings in the Peaselburg Neighborhood Historic District have some type of Craftsman-inspired element.

There are only around a dozen Tudor Revival-influenced dwellings in the Peaselburg Neighborhood Historic District, including the Ralph W. and Edna Ballard House at 1610 Woodburn Avenue and the Cleophus and Magdalon Sullivan House at 310 Hawthorne Street and at 505 Hawthorne Street, the Raymond and Elise Warwood House.