Photo: Home in the Pinckney I Historic District, Lawrence, KS. The Historic District was listed on the National Register of Historic Places in 2004. Photographed by User:Bhall87 (own work), 2009, [cc-by-3.0 (creativecommons.org/licenses/by/3.0)], via Wikimedia Commons, accessed October, 2016. 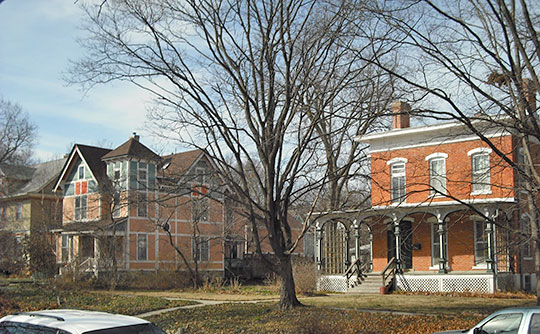 The Pinckney I District was listed on the National Register of Historic Places in 2004. Portions of the content of this web page were adapted from a copy of the original nomination document [‡].

The Pinckney I District is a neighborhood of single-family homes. During the 19th Century, the two neighborhoods known today as Pinckney on the north side of Sixth Street and Old West Lawrence on the south of Sixth Street were considered one. But unlike the Old West Lawrence neighborhood, the Pinckney I neighborhood was never home to the mansions of Lawrence's newly wealthy merchant class. Housing primarily accommodated the town's working class, reflected in the majority of modest homes. Developed from circa 1860 to circa 1927, the district contains 54 dwellings and 37 outbuildings. Most houses include detached garages or carriage houses located at the rear of the property on an alley. The grid of streets that runs through the district was platted in 1858, although numbered streets originally had names. West 6th Street was named West Pinckney Street and 5th Street was Perm Street.

The predominant house style in the Pinckney I Historic District is Folk House National followed by Folk Victorian. Housing styles within the district are as follows:

The district's boundaries are divided between two subdivisions, the Original Town site of Lawrence, platted in 1858, and the West Lawrence addition, platted in 1869. The 70-year development of the neighborhood tended to occur gradually, although certain years saw building booms. The earliest extant house in the district was likely built around 1860 at 511 Tennessee for attorney E.V. Banks. Six houses 533 Tennessee, 444 Ohio, 504 Ohio, 510 Ohio, 516 Ohio, 510 W. Sixth and 519 Louisiana were built around 1865 and 1866. As the 19th Century reached its end, building booms occasionally occurred on selected city blocks. Eight houses were built in the district around 1870-71. Six of these were built on the 500 block of Ohio Street at 520, 524, 529, 530, 539, and 545 Ohio and another was built nearly adjacent at 506 W. 6th Street. Another boomlet occurred in the neighborhood in 1903, when Frederick and Francis Snow apparently sold off several lots on the north side of the 500 block of West 6th Street. Francis Snow, chancellor of the University of Kansas, built a grand home on the northwest corner of Pinckney and Tennessee Streets prior to 1873, occupying the entire north side of Pinckney (6th) Street between Tennessee and Ohio Streets. The 1905 Sanborn map shows that the homes at 539 Tennessee, 545 Tennessee, 408 W. Sixth, 412 W. 6th, 416 W. 6th and 536 Ohio were all constructed on the original Snow parcel. These homes all have circa 1903 construction dates. The Snow house was demolished between 1912 and 1918; the residence now on the site at 406 W. 6th St. has a circa 1923 construction date. Houses continued to be built throughout the neighborhood at a gradual pace, except during years affected by drought and subsequent financial recessions (i.e., 1890-1902).

The alleys of the district naturally accommodated garages that proliferated in the 1920s. Small outbuildings were common on the 1918 Sanborn map of the neighborhood, but many more were added by 1927. The district includes 8 extant garages constructed between 1918 and 1927 and it is likely that an additional extant three were constructed in the late 1920s. The increase is attributable to the rising popularity and affordability of the automobile.

The dwellings of the Pinckney I district are representative of working class housing from the 70-year era of its development. Because Lawrence served as the county seat, opportunities were available to all classes of workers. The Pinckney neighborhood is representative of this diversity, providing sites for houses of several styles for a wide range of incomes. Early homes built in the Folk House National and Folk Victorian styles are indicative of frame dwellings that arrived with the railroads and the advent of easily available cut lumber. This popular form continued to be built in the neighborhood even after the turn of the century. Within the Pinckney I district, the Folk House National and Folk Victorian styles are defined primarily by their simple forms and frame construction. Early houses tend to have simple gable plans and balanced fenestration, such as the house at 519 Louisiana, an atypical brick design. Cross gables became more common within this category around 1870, as seen at 530 Ohio. The availability of turned spindles, decorative shingles and other wood ornament added Folk Victorian elements to the Pinckney I district toward the end of the 1800s, especially in the form of front porches. Many of the ornate porches seen today were likely added after the original construction dates. This added ornament is clear at 516 Ohio, a Folk House National design that shows added Queen Anne influences in the form of spindle-work in the facade gable and a bay that projects from the south elevation. The concentration of these modest Folk House National and Folk Victorian houses within the district contributes to the significance of the neighborhood.

The district also includes several individually significant Late Victorian dwellings, the homes of professionals that also found the neighborhood desirable. These larger dwellings tend to be in the Italianate and Queen Anne styles, popular among the wealthy at the turn of the century. Italianate houses within the district were built between circa 1866 and 1884 and are defined by low-pitched roofs, the abundant use of wood ornament such as brackets and tall, narrow windows. The district's outstanding example of the Italianate style is at 505 Ohio, a two-story brick dwelling with all of the mentioned elements, as well as segmental arched window hoods. Simpler versions of the style can be found at 512 and 524 Louisiana. Many examples of the Queen Anne style, defined primarily by very irregular rooflines and multiple wall materials, can be seen in the district in homes built circa 1890 to 1902. The 1890 home at 516 W. 6th Street is an excellent example, with its roofline in the hip-with-cross-gable configuration, wall surfaces that include clapboards and shingles and turned spindles supporting the porch. This trend toward copious ornament continues throughout the district, but is particularly concentrated on the 500 block of Louisiana Street, with examples at 520, 523, 533 and 543 Louisiana. Later dwellings, primarily Prairie Foursquare and Craftsman houses, represent the final influx into the neighborhood. These houses followed the national trend toward smaller, simpler homes with rooms that served multiple functions. The Prairie style exhibits itself in the district primarily through frame construction, wide eaves and symmetrical placement of fenestration. Most of the Prairie style homes within the district also have original full porches, typically supported by columns on piers. This style appeared here shortly after 1900; examples can be seen at 501 and 505 Tennessee and 501 and 512 Ohio. An unusual, but outstanding, 1912 example constructed of concrete block can be seen at 533 Ohio. The Craftsman style, usually one-and-a-half stories tall with a full front porch and exposed rafter tails, is the last historic style to appear in the Pinckney I district. These small houses were built here after 1910 and are usually clad in stucco or wood. The house at 519 Ohio is a 1915 example featuring two-and-a-half stories, stucco walls and triangular brackets in the eaves. Smaller examples that fit the prototype of the Craftsman bungalow can be seen at 529 Tennessee and 507 Louisiana.

Pinckney I residents worked at a wide variety of occupations and the diversity of housing is indicative of the range of their incomes. This remained true during the entire 70 years of the neighborhood's development. A sampling of occupations from 1870 to 1900 include teacher, mason, attorney, janitor, railroad worker, traveling salesman, business owner, printer, store manager, clerk, insurance agent, farmer and even Bishop of the Episcopal Church (505 Ohio). It appears that the occupations of residents became more working class between 1900 and 1930, including salesman, utility employee, newspaper employee, construction worker, janitor, teacher, clerk, telephone operator, postal employee and plumber. The neighborhood has traditionally also housed a number of widows.

As Lawrence blossomed into a university town, the City Directories listed an increasing number of students at the University of Kansas as residing in the Pinckney neighborhood, usually with their parents. A number of the houses within the district have also served as rental housing. It is possible that prior to 1900 tenants rather than owners occupied several of the houses. The neighborhood retained a significant number of renters until 1930 and it continues to do so today, although rental units do not outnumber owner-occupied dwellings. A number of the houses have been divided into two or more apartments and remain in this condition today. The Pinckney I district has retained its character in the years following 1930 to the present as a home to Lawrence's middle class and those associated with the University of Kansas, either as instructors or students. The Pinckney I district retains its integrity in location, setting and architecture. The wide streets, street trees and remaining brick sidewalks, stone curbs, and hitching posts reinforce its significance. The massing and relatively unchanged appearance of modest housing placed next to fine examples from the Late Victorian period contributes to the district's eclectic sense of time and place. Several historic Lawrence neighborhoods have suffered from the encroachment of commercial development or the University, but the Pinckney I neighborhood, located away from the main crossroads of the town, has retained its original flavor. The number of single-family homes remains high and restoration work on a number of properties is visible.