Photo: Home in the Pinckney II Historic District, Lawrence, KS. The Historic District was listed on the National Register of Historic Places in 2004. Photographed by User:Bhall87 (own work), 2009, [cc-by-3.0 (creativecommons.org/licenses/by/3.0)], via Wikimedia Commons, accessed October, 2016. 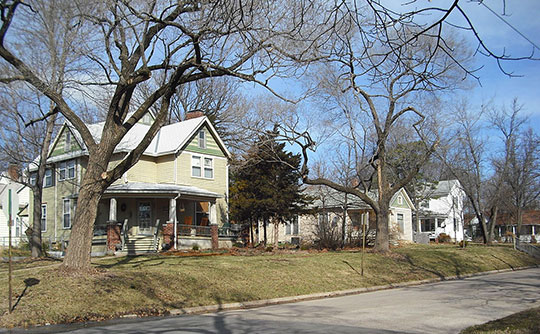 The Pinckney II District was listed on the National Register of Historic Places in 2004. Portions of the content of this web page were adapted from a copy of the original nomination document [‡]. Adpatation copyright © 2016, The Gombach Group.

The Pinckney II district is located northwest of Lawrence's original business district in the West Lawrence subdivision. The district encompasses slightly more than one block of dwellings and outbuildings. The surrounding streets are set on a grid established in Lawrence in 1858, early in the settlement of the town. The district includes the properties on the east and west sides of the 300 block of Indiana Street, as well as the properties at 400 and 401 Indiana St.

The character of the neighborhood is generally that of a 19th Century small-town neighborhood, consisting primarily of single-family homes. Most of the homes retain their original single-family status. The shaded streets are paved in asphalt, but original brick pavers are still present under the asphalt. The district also retains brick sidewalks, stone curbs and stone hitching posts. All of these elements are considered character-defining features of the district.

The predominant house style in the Pinckney II Historic District is Folk House National followed by Folk Victorian. Housing styles within the district are as follows:

The district's boundaries lie within the West Lawrence addition, platted in 1869. The nearly 60-year development of the district tended to occur in building surges. The district, although considered part of the town's core today, was rather isolated during its era of development and was omitted from Sanborn maps. The dwellings of the Pinckney II District are representative of working class housing from its period of significance. Because Lawrence served as the county seat, opportunities were available to all classes of workers. The Pinckney neighborhood is representative of this diversity, providing sites for houses of several styles for a wide range of incomes.

The 1873 Atlas of Douglas County shows the district as moderately populated with seven houses, placed either on large lots or on double lots. Four of these houses—309, 331, 304 and 400 Indiana St.—are still extant today. The oldest house in the district is the circa 1867 Hollister house at 309 Indiana St., built for Simpson Hollister, a real estate agent and likely the neighborhood's first promoter. The circa 1869 house at 331 Indiana likely soon followed, built for J.C. Bare, a millwright. Charles Holt, a driver, was the first owner of the residence at 400 Indiana, built circa 1870. These three early homes are built in the Folk House National style, defined primarily by their simple forms, and are indicative of frame dwellings that arrived with the railroads and the advent of easily available cut lumber. The brick construction of 309 is unusual for the street, speaking well of the owner's status as a real estate developer, but the clapboards of 331 and 400 are more typical for this style. The grandest home in the district, 304 Indiana, was built for Albert and S.T. Zimmerman in 1869. S.T. Zimmerman was chief engineer for the construction of the Bowersock Dam, a miller and a railroad contractor. The Zimmerman house was listed on the National Register of Historic Places in 1974, significant as possibly the only surviving example of the Second Empire style in Lawrence. The Zimmerman house's mansard roof, tower, brackets and cresting all contribute to its style classification.

Four additional extant houses—321, 302, 312 and 326 Indiana St.—were built between 1897 and 1900, most in either the Folk Victorian or Queen Anne styles, somewhat more ornate than their earlier neighbors. These houses tend to have a higher degree of ornamentation, as seen in the combination of clapboards and shingles at 302 or the hip peaks on the cross gable at 312. The Kasold house at 326 Indiana is an excellent example of the Queen Anne style, retaining its original cross-gabled form and much of its ornate milled trim. The Kasold house, paired with the Zimmerman house, represent the affluence that could be found during Lawrence's early development.

Six houses were built between 1905 and 1910 in Folk Victorian, Queen Anne, Colonial Revival and Folk House National styles, showing that although architectural trends entered the district, earlier styles also prevailed. Despite the variety of forms, these later houses consistently included generous front porches, as well as combinations of wall materials. The houses at 322 and 401, built circa 1908 and 1906, both have first stories clad in brick and upper stories covered in wood shingles, a detail common in houses of this era that continued into the later 1900s. The last historic home added to the district was 346 Indiana, a 1924 Craftsman bungalow built for Oscar and Adella Newby. This house fits well into its style classification, with its stucco exterior, 1-1/2 story height and full front porch supported by tapered wooden piers placed atop brick piers.

Pinckney II residents worked at a wide variety of occupations and the diversity of housing is indicative of the range of their incomes. This remained true during the entire 60 years of the neighborhood's development. A sampling of occupations from 1870 to 1875 includes tobacconist, driver, city engineer, carpenter, surveyor, millwright and real estate agent. By 1900, many of the Pinckney II residents worked as employees for the businesses that had developed in Lawrence, such as Barteldes Seed Company, Lawrence Vitrified Brick and Tile Company, Lawrence Egg Case and Filler Company and the University of Kansas. In 1900, widows live in three of the houses (331, 341 and 342.) Edmund Kasold, successful owner of the West End Grocery and councilman for the 1st Ward, built his impressive Queen Anne house at 326 Indiana in 1898. The occupations of residents remained working class between 1900 and 1930, with listed occupations that included fireman, driver, lineman, clerk and employees of the Barteldes Seed Company, Kansas Electric Power Company, L.B. Price Mercantile and New York Cleaners.

It appears that few University of Kansas students found their way to the Pinckney II neighborhood for student housing. A number of the houses within the district have served as rental housing, but typically for the working class or for instructors at the University. It is possible that prior to 1900 several of the houses were occupied by tenants rather than owners. The neighborhood retained a significant number of renters prior to 1930, but today most dwellings are owner-occupied. The Pinckney II District has retained its character in the years following 1930 to the present as a home to Lawrence's middle class.

The Pinckney II District retains its integrity in location, setting and architecture. The wide streets, street trees and remaining brick sidewalks, stone curbs, and hitching posts reinforce its significance. The massing and relatively unchanged appearance of modest housing placed next to fine examples from the Late Victorian period contributes to the district's eclectic sense of time and place. Several historic Lawrence neighborhoods have suffered from the encroachment of commercial development or the University, but the Pinckney II neighborhood, located far from the main crossroads of the town, has retained its original flavor. The number of single-family homes remains high, along with its integrity.