Photo: Home in the Old West Lawrence Historic District, Lawrence, KS. The Historic District was listed on the National Register of Historic Places in 2008. Photographed by User:Bhall87 (own work), 2009, [cc-by-3.0 (creativecommons.org/licenses/by/3.0)], via Wikimedia Commons, accessed October, 2016. 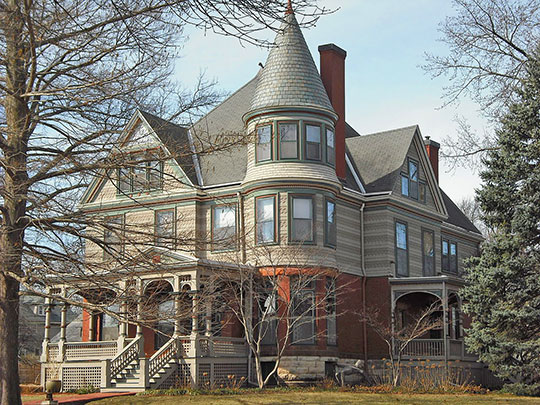 The Old West Lawrence Historic District was listed on the National Register of Historic Places in 1972. Portions of the content on this web page were adapted from a copy of the original nomination document. [1]

The Old West Lawrence Historic District encompasses all or parts of 12 city blocks near the center of Lawrence, Kansas. The major portion of the Old West Lawrence Historic District lies in six city blocks bordered on the north by Sixth Street, on the east by Tennessee, on the south by Eighth Street and on the west by Indiana. Included in this residential neighborhood are about 50 residential structures of distinction.

The houses in the Old West Lawrence Historic District reflect the distinctive characteristics of late 19th century Kansas architecture. A mixture of styles typical of this era in Kansas history as well as a cross section of building materials in common use can be found in the Old West Lawrence Historic District. The Old West Lawrence Historic District contains a significant and very distinguishable blending of style, form, character and construction. Examples of Victorian style, Eclectic assemblages, Italian Renaissance style, and simple utilitarian Frontier architecture exist in peaceful coexistence in this area. Building materials range from massive stone masonry through brick construction to wood framing replete with intricate pattern and scroll designs embellishing stately two and three story mansions. Magnificent porches, soaring towers and bay windows typical of the period of construction are visible everywhere.

The fine structures are further enhanced by understanding site development and landscaping, establishing a dignity not readily found in today's residential communities. The close proximity of so many important houses and the fine care they have received make this district outstanding.

Restoration and preservation of many of the buildings, notably by their owners, has helped to revive interest in the Old West Lawrence Historic District's potential by showing both the financial feasibility and the architectural merit of such improvements. There has been virtually no unsympathetic renovation.

Concern for the integrity of the Old West Lawrence Historic District recently inspired the area residents to petition the city not to replace their original brick paved streets with modern concrete.

This Old West Lawrence Historic District is the most unique collection of period residences in Kansas and by virtue of its breadth of architectural styles and building materials becomes a significant segment in the architectural heritage of the state.

Subsequent to the passage of the Kansas-Nebraska Act in 1854, organizations were formed in New England to encourage and assist the emigration to Kansas of people opposed to he expansion of slavery. The New England Emigrant Aid Association sent Charles H. Branscomb and Charles Robinson (later the first governor of the state) to locate a suitable site for a settlement. They were soon followed by the first group of 29 settlers who arrived at the present location of Lawrence on August 1, 1854, and camped on a hill which they named Mount Oread after a seminary in Massachusetts. (It was on this site that the University of Kansas was later established.) After a day or two the group moved on to the town site and pitched their tents on what is now the west side of Massachusetts Street. After the arrival of a second group of 114 in September, the two groups united and organized a town association on September 18, taking the name of their new city from Amos A. Lawrence, one of the trustees of the Emigrant Aid Association.

A. D. Searle started to survey the town site on September 25. Trustees were selected on October 9 to guide the affairs of the Lawrence Association, and on October 17 the members of the association drew for city lots. Construction of simple buildings began immediately thereafter.

Lawrence was the main center of Free State thinking and leadership in Kansas Territory, and as such it was often the focal point for the hatreds and violence of pro-slavery settlers and Missouri "Border Ruffians." The city and its inhabitants were several times threatened with destruction and death by besieging forces of irregulars. The government of the territory was controlled by the proslavery element and created all possible hardships for the Free State people in Lawrence. On May 1, 1856, a pro-slavery force burned a number of buildings, destroyed the printing presses of Free State publications and plundered the town.

Perhaps the most infamous event in the history of Lawrence was the raid by Quantrill's guerillas on August 21, 1863. The citizens of Lawrence were caught off-guard and generally without the means at hand to defend themselves. Approximately 143 people were murdered and another 30 seriously wounded. The raiders, according to survivors' accounts, passed by those who offered armed resistance and claimed the defenseless for their victims. Almost the entire business district was looted and burned to the ground. Nearly 100 homes were destroyed and most of the others were looted. Slowly the grief-stricken survivors came to grips with the situation and began to clean up and rebuild. Indicative of their spirit was the attitude reflected in a sign on a harness shop: "Established 1855; stood the drought of 1860; totally destroyed in 1863; defies all competition in 1864."

The end of the Civil War brought new settlers, economic recovery and a building boom. At the time of Quantrill's raid the main residential area was east of Massachusetts Street. After the war an area west of Massachusetts became the fashionable part of town where many of the prominent and prosperous built their large homes. The neighborhood now designated as the Old West Lawrence Historic District was included in this post Civil War residential development and is the only part of it which has withstood the encroachments of business, university and multiple family housing.

Although all of what is now the Old West Lawrence Historic District was included in the October, 1854, survey map of Lawrence City by A. D. Searle, not all of the Old West Lawrence Historic District was in the original Lawrence townsite. Official plat maps show that several blocks are in Lane's First Addition. James Lane was one of the prominent Free State leaders in Lawrence and one of the first two United States senators from Kansas. Through the use of political influence Lane was able to acquire the land adjoining the original townsite on the west. He had a previously granted patent invalidated and then claimed the land for himself. (Lane shot and killed Gaius Jenkins on June 3, 1858, in a dispute over this claim.) Lane's First Addition was developed as the city expanded westward after the Civil War.

The homeowners of this neighborhood take pride in their fine old homes and have united to form the Old West Lawrence Association. Street signs have been placed identifying the area as Old West Lawrence. (The area thus identified is larger than the historic district; the boundaries of the district were drawn after careful on-the-scene study showed that the organization included a number of blocks which had some modern commercial buildings and other structures out of keeping with the general atmosphere of a historic residential district.) One of the primary purposes of the association is to block attempts fostered by various commercial interests to change the city zoning ordinances to permit business and apartment development in the neighborhood.

The Old West Lawrence Historic District is important to the heritage of the city of Lawrence and the state of Kansas. Architecturally, this neighborhood demonstrates the development and transition of Kansas residential styles from the 1860's to the early 20th century. No other neighborhood in the state has yet been identified where such a large number of 19th century homes still stand in excellent condition and without detrimental encroachments by businesses and modern housing developments.

One Hundred Years of History Significant to Kansas (Lawrence, The World Co., 1954).

"Souvenir Program of the 75th Anniversary of the Founding of Lawrence" (Lawrence, The World Co., 1929).