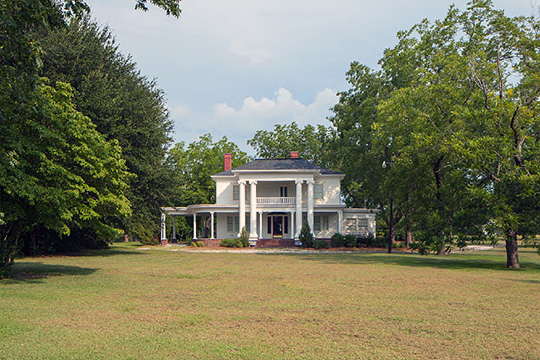 The Twin City Historic District was listed on the National Register of Historic Places in 2014. Portions of the content on this page were adapted from a copy of the original nomination document. ]‡]

The Twin City Historic District is significant for its excellent examples of historic residential, commercial, and community landmark buildings. The majority of the buildings in the district were built from the 1880s to the 1950s and reflect the style and type of commercial and residential architecture which was so prominent in Georgia's towns and cities during this period.

The houses represent the common architectural types and styles found throughout Georgia in the late 19th through the mid-20th centuries. These types and styles are identified in a 1991 statewide context Georgia's Living Places: Historic Houses in Their Landscaped Settings. A large number of turn-of-the-century houses are located on large lots throughout the district. Many of these houses exhibit similar characteristics such as twin intersecting gables with decorative elements. The major stylistic influences include Folk Victorian, Queen Anne, Classical Revival, Craftsman, and English Vernacular Revival. House types include Queen Anne cottage, New South cottage, Georgian cottage, Georgian house, English cottage, gabled-wing cottage, bungalow, central hall, and Ranch house. Wood is used as the primary exterior material. House sizes range from modest to very large. One-story construction is typical of Twin City, but there are also several one-and-a-half story examples. Very few of the houses in the district are architect designed. The houses in the district illustrate how popular styles and types of the period were used for a variety of houses.

One of the houses known to have been architect designed is located at 414 S. College Street. The house was designed by Leila Ross Wilburn, noted Atlanta female architect. It was constructed c.1921-1925. Other similar Craftsman-style bungalows are clustered in the same area. It is not known whether her house plans were used for any of these. Wilburn, published numerous pattern books for houses in the first half of the 20th century.

The district is also architecturally significant for its community landmark buildings including the former city hall/jail, several churches, and a school complex. The community landmark buildings are clustered in the center of the town and reflect various styles of architecture in Georgia from 1900 to 1954, including Greek Revival and Gothic Revival, which were commonly used for church design in Georgia.