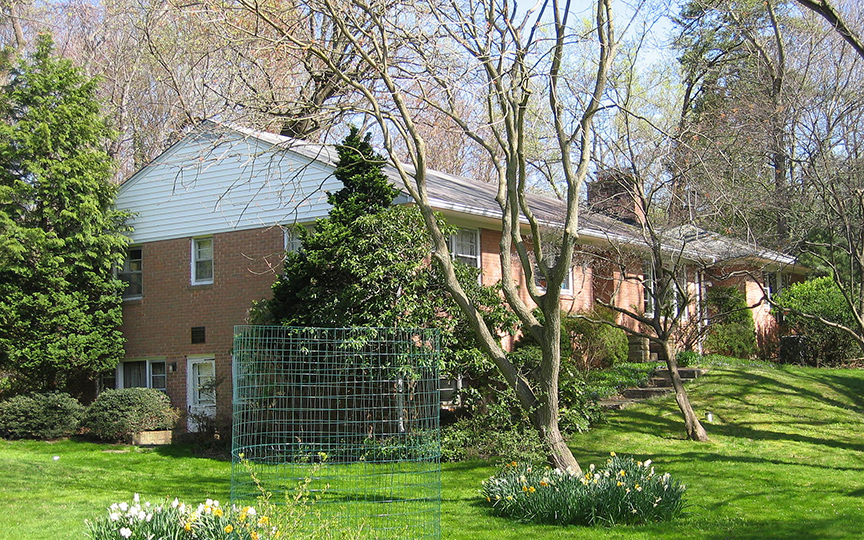 Photo: An exterior view facing east, of the ranch-style suburban residence built for Rachel Carson in 1956. Located at 11701 Berwick Road, Silver Spring, MD. Listed on the National Register of Historic Places in 1991. Photographed by User:Eli.pousson (own work), 2009,
[cc-by-3.0], via Wikimedia Commons, accessed November, 2019.

The Ranch style house [†] was the most ubiquitous type of housing in American suburbs from the postwar years up to the 1970s. The housing and material shortages, mass production techniques, population growth, and financing options that developed during and after WW II made the Ranch type a logical choice for new construction. Architectural historian Alan Hess summarizes its significance for the nation: "The Ranch House was the dominant residence type of the American Century. Few building types ever housed as many Americans."

During the 1930s, California architects Cliff May, H. Roy Kelley, William W. Wurster, and others adapted features from historic southwestern ranch dwellings and traditional Hispano architecture to create the modern Ranch house. May helped spread the concept to other parts of the country through books and publications such as Sunset Magazine. One of the factors ensuring the success of the Ranch was its great adaptability as a type that lent itself to individualization through the incorporation of a variety of styles. As Hess notes, the type featured a "moderate modernism," which combined innovative features with historical references that could be individualized by region. In mass production, Ranch houses had the simple form and minimal ornamentation that adjusted easily to prefabrication and standardization. As study of recent past resources indicates, "Sometimes the line between the Mid-century Modern house and the Ranch house is difficult to discern, and in fact many 'Modern' architects also designed houses in the Ranch style."

In 1954, the Community Builders Handbook noted Ranch houses were "in great demand" and pragmatically advised developers that such one-story houses could be placed closer to the street, especially if the living room moved to the rear of the dwelling. However, by 1960 the Handbook cautioned, "Today's home buyer wants a house that doesn't look like everyone in the block." Hess judges the Ranch "is the face of the suburb, whether beloved or reviled."

Essential characteristics of the Ranch included a one-story height and horizontal emphasis, with a low-pitched gabled or hipped roof with deep eaves; a simple rectangular, square, or rambling plan; and an asymmetrical facade. Ranches generally featured minimal porches, including concrete stoops or inset bays under projecting eaves. Decorative elements could be traditional, rustic, or modern. The interior offered an open floor plan that provided a spacious appearance, as well as connections between interior and exterior spaces through elements such as picture windows and sliding patio doors. Kitchens, generally large, provided an informal space for family cooking and eating.

In 1958, Cliff May observed that "one of the major qualities of good ranch design ... is adaptability to changing conditions." This adaptability resulted in several subtypes, including a version generally erected during or immediately after the war, when shortages of materials and manpower affected house design and size. Called by a variety of names, including Minimal, Plain, and Transitional, these modestly-priced, often frame, houses generally displayed a simple square or rectangular plan and small size starting at about 650 square feet. Such houses had a low-pitched hipped or gabled roof and an asymmetrical facade with a picture window and a small minimal porch or no porch. In subdivisions, builders quickly erected these houses with repetitive designs that could be individualized by the owner at a later date. Interiors generally included four or five rooms, with formal dining rooms eliminated in favor of eat-in kitchens.

The Simple Ranch, the iconic house of American subdivisions during the 1950s and early 1960s, featured a broad asymmetrical facade with picture window, low pitched hipped or gabled roof, minimal porch, combination of wall materials, and attached garage or carport. A variety of other subtypes developed, including the Contemporary Ranch, displaying a low-pitched roof with wide eaves, expanses of glass with horizontal or stacked windows, irregular plans, a combination of wall materials, attached garages or carports, and components such as planters and wing walls. Traditional Ranches included some period revival details. The Spanish Ranch had stucco walls and a tile roof, while the Swiss Chalet Ranch featured gables with picturesque scalloped verge boards. Custom Ranches represent a larger, architect-designed and more elaborately detailed version of the type that includes features integrating the house with the landscape.