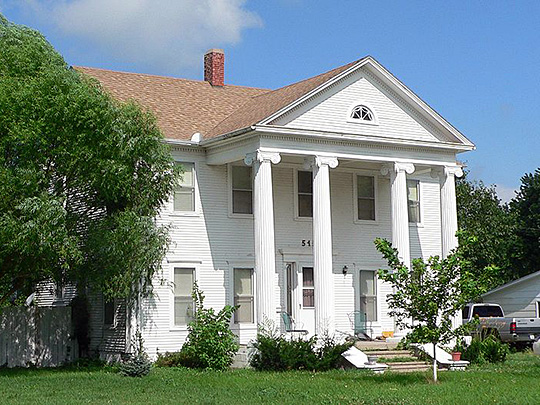 Photo: Kinner House, 515 Tibbals in Holdrege, Nebraska. The house was built ca. 1903 in Classical Revival style. It was listed on the National Register of Historic Places in 2004. Photographed by User:Ammodramus (own work), 2010, via Wikimedia Commons, accessed April, 2013.

Popular from approximately 1893 to the 1950, the Classical Revival [1, 2] style was based in part on earlier Classical and Greek Revival buildings. This American style began with the World's Columbian Exposition in Chicago in 1893. The style’s popularity can be divided into two time periods with several characteristics differing from the other. The first ranged from the turn of the century through 1920 and emphasized hipped roofs and elaborate, classical columns, symmetrical facades, while the later favored simpler, often squared columns and gabled roofs. Ornamentation often included swags and garlands, elaborate capitals, broken pediments and roof-line balustrades. The Classical Revival style exhibits double-hung windows, typically six-over-six; a full-height entry porch with or without a lower full-width porch; and cornices with dentils and wide frieze bands beneath a cornice. Exterior materials were nearly always brick, stone and/or cast stone.