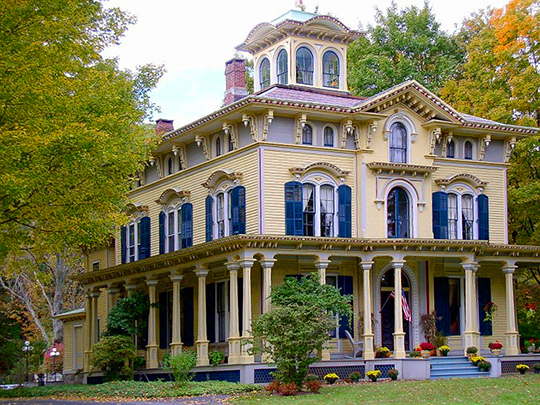 The Historic Resources of Asylum Hill, multiple property thematic nomination, was listed on the National Register of Historic Places in 1978. It contains, among homes of other celebrated Americans, the Mark Twain home. Portions of the content on this web page were adapted from a copy of the original nomination document.

Asylum Hill was the fashionable residential section of Hartford in the late 19th century. The best materials and craftsmanship were used by leading architects in constructing the houses and churches, many of which still stand today, that give a sense of the area's affluent lifestyle at the turn of the century. Hartford's decision makers during these years lived on Asylum Hill. The surviving Victorian Gothic, Second Empire, Romanesque and Tudor Revival, Queen Anne, and Stick Style buildings are outstanding examples from this late 19th century upper middle class neighborhood.

At the beginning of the 19th century, streets in what is now the center of downtown Hartford, such as Prospect, Pearl, Ann, Elm, and High Streets, were the location of important homes. As the city grew and downtown became an undesirable area for homes, large residences were built south of downtown in the Charter Oak-South Green neighborhood. As desirable sites in this area immediately south of downtown were filled up, attention turned to the hill west of downtown and most of Hartford's fine houses for several decades were built on Asylum Hill. In mid-century the houses were surrounded by extensive grounds forming estates of considerable pretension. Among the families living along Farmington and Asylum Avenues in such estates were the Cooleys, active in finance; the Beaches, who conducted an importing business and were bankers; the Dixons, one of whom was a United States Senator; the Jewells, who conducted a manufacturing business and had one member who was Postmaster General and Ambassador to Russia; the Goodwins, important in trade and real estate development; the Collinses, merchants and bankers; and the Terrys, instrumental in forming an early insurance company. As the century waned the estates were broken up into conventional building lots.

The story of the sequence of desirable addresses for important people may be seen in capsule form in the sequence of home addresses of members of Hartford's oldest continuing law firm, Gross, Hyde and Williams. The first Mr. Gross lived on Elm Street, in center city. Mr. Hyde lived south of downtown on Charter Oak Place. The next generation of the Gross family lived on Asylum Avenue near their church, the Asylum Avenue Congregational. In the second decade of the 20th century the Gross family moved from Asylum Hill, further west. The term of their residence in Asylum Hill coincided with the area's peak period of prosperity and prominence.

The quality of Asylum Hill architecture derived in large part from the ability of the architects who designed houses there. Hartford architects William C. Brocklesby, Octavius Jordan, Hapgood and Hapgood, George Keller, and Isaac A. Allen, Jr. , are known to have worked in the area. Out-of-town architects represented in Asylum Hill include Frederick C. Withers, Edward Tuckerman Potter, Richard Me Upjohn, Patrick C. Keely, Ernest Flagg, and Francis H. Kirnball.

From the Civil War to World War I, Asylum Hill was the area in Hartford where the best families lived. These people engaged the services of the best architects and contractors to design and build their homes. The buildings that remain in place from this era give valuable insight into the architecture and neighborhood relationships of an affluent 19th century neighborhood. The survey and inventory of Asylum Hill being conducted by the Hartford Architecture Conservancy are part of a citywide project to be completed in 1978. At that time the Conservancy's report will become one of the planning tools available to city and state agencies. The research records and photographs generated during the project will be deposited at The Stowe-Day Research Library, where they will be on file for use by the public and by government agencies who may wish to consult them.