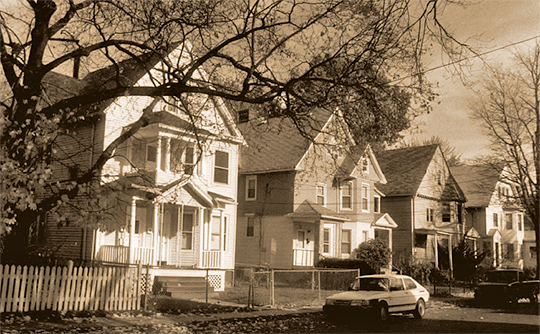 The Allen Place-Lincoln Street Historic District‡ was listed on the National Register of Historic Places in 2003.

The Allen Place-Lincoln Street Historic District consists of 180 urban structures located southeast of the Frog Hollow Historic District, about one mile southwest of the center of downtown Hartford, Connecticut. The majority of houses in the Allen Place-Lincoln Street Historic District are two-story two-family frame buildings in the Queen Anne/Colonial Revival style built between 1890 and 1915, sited close together on relatively small lots. The houses are near the street, set back from the sidewalk by only 10'/15', presenting a densely-built-up middle-class residential urban neighborhood, largely free of institutional, commercial, and apartment buildings when built, and largely free of intrusions today.

The Frog Hollow Historic District is focused on residential and commercial resources associated with Hartford's 19th-century industrial development. The preponderance of related residential buildings were examples of the widely occurring Hartford building type called the "Perfect Six." The Perfect Six is a three-story brick building with two apartments on each floor behind double-bow front and under heavy Neo-Classical Revival sheet metal cornice.[1]

In the southeastern corner of the Frog Hollow Historic District, along Jefferson and Madison Streets, construction mix becomes more frame than brick and more two-and three-family than Perfect Six. This influence continues, strengthens, and becomes clearly dominant in the next southerly blocks of Lincoln Street and Allen Place, in the Allen Place-Lincoln Street Historic District addressed by this documentation. The District focuses on this demographic and physical progression which occurred in recognition of the residential needs, aspirations, and achievements of the new white collar segment of the working population. The Allen Place-Lincoln Street Historic District continues south to include the row of houses on the north side of Vernon Street, which reflect predominately Italianate/Queen Anne influence. Vernon Street is a strong visual boundary because its south side, across the street from the district, is the location of the Learning Corridor, a new square-block educational complex constructed in 1998-1999.

The typical house in the Allen Place-Lincoln Street Historic District is frame, often originally covered by clapboards at first floor, shingles at second, with two front doors, usually side-by-side, a two-story front porch with round columns and other Colonial Revival details, a three-sided bay on the front, offsetting the paired front doors, and perhaps another three-sided bay on one side, with gable roofs on the porch and main block. Queen Anne details such as console brackets and sunburst panels provide contrast. Often two to four examples of the same house were built, next to one another.[2] The Allen Place-Lincoln Street Historic District included a few earlier modest brick Queen Anne houses, several brick Perfect Sixes and Three Deckers, and the slightly earlier distinguished row along Vernon Street. Original bluestone or slate sidewalks continue in place along sections of Broad Street and Lincoln Street. About half of the houses have frame two-and three-car garages dating from the mid-20th century.

The development of Hartford as an insurance and financial center is reflected by the two-family frame houses which line the streets of the Allen Place-Lincoln Street Historic District. While the city's factories of the 19th-century Industrial Revolution continued to prosper, an additional strong component of Hartford's economy involving many white collar and service workers came to the fore at the turn of the 20th century. These white collar families were able to live in larger more spacious apartments than factory workers, their homes usually accommodating two families, sometimes three, to a building, which were constructed in the currently fashionable interpretation of the ubiquitous Queen Anne/Colonial Revival style, often with mill work of high quality. The houses of these development years are historically significant as artifacts of social change and architecturally significant because they are good examples of their period and because of their density, relatively good state of historic preservation, and freedom from commercial intrusions. Allen Place-Lincoln Street Historic District is architecturally and historically significant in Hartford for these reasons.

The history of the Allen Place-Lincoln Street Historic District's physical change from farmland to dense residential use is best understood by tracing its sequence of development as depicted by city atlases. Starting with the earliest in the series, the 1869 atlas shows open space from Baker Street (later Ward Street) south to Vernon Street, although Allen Place already has been put through, and open space from Washington Street west to Zion Hill and Barnard's cemeteries, with only half a dozen buildings in the entire area. By 1880, little had changed at the west end of the area, with only two houses occupying large lots between Vernon Street and Allen Place, at Zion Street. The east portion of the area, however, has seen the introduction of Broad Street and its connections to Washington Street by Jefferson Street and Madison Street (but not Lincoln Street). Scattered houses appear, the largest cluster being the row on the south side of Allen Place west of Broad Street.

In the late 19th century, most of the land in the Allen Place-Lincoln Street Historic District was held in a few relatively large parcels by several different owners, but there is no indication that any one investor or builder dominated development. John A. Allen, for whom Allen Place was named in 1870, was the largest landowner. Residing at the corner of Washington Street and Allen Place, he built at least four frame houses which, together with still-open land west of Broad Street, were owned by his estate in 1909. Another prominent local citizen, John P. Harbison, chief executive of the Hartford City Gas Light Company, lived on Vernon Street. He owned the four 1897 brick houses, 82-102, on the south side of Allen Place at the corner of Broad Street[3] well into the 20th century. William H. Scoville was the most prominent developer to play a role in the Allen Place-Lincoln Street Historic District (see below), but it appears that the vast majority of houses were put up singly or a few at a time, mostly for rent or for sale. Henry R. Tryon (1818-1898), a mason who built Temple Beth Israel on Charter Oak Avenue and the City Hotel at the corner of Main and Gold Streets, built 29 Lincoln Street. Another member of the family, Edward S. Tryon, also a builder, constructed 39-41 Lincoln Street, but did not live there. James N. Waite, a contractor, built and owned, for income, 40-42 and 44-46 Lincoln Street.

The increasing number of artisan and white collar workers emerging in Hartford at the turn of the 20th century is reflected in the occupations of district residents reported in 1896 Hartford city directory. For example, Joseph Buths of Allen Place was employed by the State Savings Bank and was a street commissioner. His neighbor, Daniel H. Welles, worked as an actuary at Connecticut Mutual Life Insurance Company. Arthur E. Houston, superintendent at an unnamed factory, owned but did not live in 40-42 and 44-46 Lincoln Street. In 1896 M.J. Flynn owned two lots, 54 and 56 Lincoln Street, perhaps as an investment. E.J. Hoskins, a clerk, owned a house in the Allen Place-Lincoln Street Historic District but did not live there.

In 1914, the first year for which the city directory lists residents and their occupations by street number, a sampling shows the following activities pursued by residents of the district:

The pleasant, roomy living conditions provided by the fashionable frame houses catered to the new class of white collar workers. Not a single factory worker was included. The new social and economic mid-level was brought into existence by the new financial and service economy. The two worked hand-in-hand, as clearly demonstrated by conditions in the district when it was built and as it continues today.

The economy in cost of building more than one of a particular house design was pursued in the district, a practice consistent with the neighborhood's status, which was somewhere between working class and fashionable. Two identical houses were built in 11 instances;[4] three identical houses in four instances,[5] and four identical houses in five instances.[6] Traditional brick masonry gave way to new frame construction, which permitted more variety in shape and details. Two-story front porches, three-sided front and side bays, Queen Anne brackets, and Colonial Revival columns and pediments proliferated. The results were comfortable and roomy living quarters densely located on modest-sized lots, forming consistent streetscapes block after block. The many frame garages in the Allen Place-Lincoln Street Historic District were not original but offer testimony to the neighborhood's continued residential viability at mid-century.

The four architects identified by the building district's building permits were recognized practitioners, but known for relatively low budget projects as opposed to highly prestigious buildings. Their participation in Allen Place-Lincoln Street Historic District is not surprising, and is discussed in the following paragraphs.

Walter T. Arnold — (- 1898) 137-139 Allen Place Little information is at hand regarding Walter T. Arnold. His eight known houses, identified by building permits, were designed just before his death, being constructed in 1897-1900 in the South End of Hartford.

Berenson & Goodrich — 54-56 Affleck St., 1141 -1143 Broad St. The office of Julius Berenson and Ernest S. Goodrich was in practice only for the years 1913-1915, being credited with 10 commissions, about evenly divided between the North End and South End. Berenson launched his career in 1912 in a brief association with Abraham L. Rosen, as Berenson & Rosen. His longest period of activity was with Jacob F. Moses (1884-1956) in Berenson & Moses, from 1917 to 1932, designing buildings of various types in all sections of the city, including the West End. Collaboration with Clifton C. West (1897-1976) followed in 1954. West then practiced as Julius Berenson Associates to 1960.

William H. Scoville — (1862-1932) 17 Lincoln St., 18 Lincoln St., 23 Lincoln St., 36-38 Lincoln St,., 40-42 Lincoln St., 44-46 Lincoln St. During his career Scoville described himself as an architect but really was a builder, a common and accepted practice at the time. He bought designs from a variety of architects, although he maintained design control. His houses are easily identifiable for the flair, pleasant mixture of classically inspired features in unusual juxtaposition, and high quality millwork. He maintained a millwork shop. Many of his houses are in the West End, where he successfully introduced frame construction where masonry had formerly been de rigeur. Scoville was also a developer. It is likely that he bought the land for the cluster of houses on Lincoln St., built them, and sold them to the new owners. Scoville may have constructed more houses in Hartford than any other builder.

George A. Zunner, Sr. — (1861-1936) Christ Evangelical Lutheran Church, 1115 Broad St. Zunner was born in Germany, but by age 28 (1889) was married and living in New York City. He was employed on the German buildings at the Chicago World's Colombian Exposition (1891-1893), then spent three years in Boston before arriving in Hartford in 1896. He designed another Gothic Revival brick church, similar to Christ Evangelical Lutheran Church, in 1929 which had Lutheran associations when built but is now known as Broadview Community Church, 45 Oliver Street, in the southwestern corner of Hartford. It continues in use. Zunner drew plans expertly in a variety of styles, including Arts and Crafts and Modern Architecture. He turned out an enormous quantity of work, probably being Hartford's most prolific architect.

[1]Hartford has hundreds of these buildings, while other New England cities have dozens.

[2]Identical houses are tabulated at footnotes 4, 5,and 6.

[3]The corner house has been replaced by the Star Cleaners building.

Atlas of the City of Hartford and the Town of West Hartford, Connecticut. Springfield, Massachusetts: L. J. Richards & Co., 1909. Plate 8.

Atlas of the City of Hartford and the Town of West Hartford, Connecticut. New York: Sanborn Map Company, 1917. Plates 1, 11.