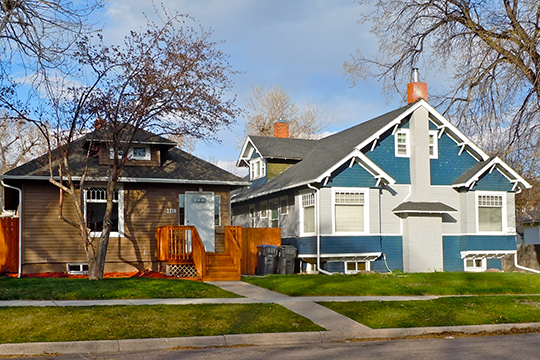 The Lakeview Historic District was listed on the National Register of Historic Places in 1996. Portions of the content on this web page were adapted from a copy of the original nomination document. [‡]

Lakeview is one of the several historic neighborhoods that comprise the Original City of Cheyenne, which was platted in September 1870. Immediately to the west of the District is the Capitol North Historic District and the State Capitol Complex, and to the south is the Rainsford Historic District. The Lakeview Historic District continues the architectural and historical developments represented in both the Capitol North and Rainsford Districts. While those two districts contain houses of Cheyenne's more affluent residents of the late nineteenth and early twentieth centuries, Lakeview represents the architectural traditions of Cheyenne's more modest working class residents. Many of the same styles — Italianate, Queen Anne, American Foursquare, Bungalow, the revivals — are represented in Lakeview but as smaller, simpler examples.

Thus Lakeview Historic District presents a full array of the more modest houses that are so prevalent throughout historic Cheyenne. Because of the similarity of house size and its entirely residential character, Lakeview has excellent visual cohesiveness.

The Lakeview Historic District is significant because it is a cohesive residential area representative of working class architecture found throughout historic Cheyenne. The earliest known structures in Lakeview date to about 1880. Development continued at a steadily increasing pace until about 1930. Construction then slowed, so that by the 1940s, only the occasional vacant lot was being developed. Lakeview is a neighborhood of modest homes originally occupied by railroad workers, clerks, and small business owners. As such, Lakeview is associated with the underlying growth of Cheyenne as a regional center and railroad town. Thus, the district complements its two neighbors, the Capitol North and Rainsford historic districts, both of which feature homes of wealthier ranchers, merchants, and politicians.

Cheyenne owes its existence to the building of the first transcontinental railroad in 1867-1868. Such a railroad was needed to provide a safe, reliable and fast means of passenger and freight travel between the settled areas on the west coast and the eastern portion of the United States. In between lay a vast expanse of largely uninhabited plains and mountains. The railroad was to not only provide a link between east and west but also serve as the catalyst for settlement and development of the western territories. Both stagecoach and covered wagon travel in the territories were subject to the constant danger of Indian raids. The length of time involved in western emigration and freight deliveries via wagon trains was a deterrent to western development. Furthermore, water sources were unreliable in long stretches of emigrant and stagecoach routes, and many travelers complained of alkali poisoning.

By the late 1870s, prosperity was assured due to the developing cattle industry and to the discovery of gold in the Black Hills. Cheyenne became the political and social headquarters for Wyoming "cattle barons." It was also the closest railhead and therefore the shipping and supply point for the gold mines. In early 1876, a stage line commenced operation between Cheyenne and the Black Hills. For a time in the 1880s, Cheyenne was the wealthiest city per capita in the nation. The end of the decade, however, saw a sharp decline in such fortunes, especially those of the cattlemen, who suffered greatly as a result of the disastrous blizzards of 1886-1887. The stage line also dissolved at this time, due to the construction of the Cheyenne and Northern Railroad, which connected Cheyenne to the Chicago and North Western Railroad north of Guernsey. More importantly, other more direct rail lines were built into the Black Hills region so that Cheyenne lost it prominence as the nearest railhead.

Only two structures in Lakeview are known to have been constructed during this early period, one of which was associated with the cattle boom. The Moreton Frewen House, constructed in 1880, is listed on the National Register of Historic Places. Frewen, a wealthy Englishman, was the first to introduce cattle to Wyoming's Powder River country. Like other wealthy ranchers he had a townhouse in Cheyenne, but Frewen chose to live in the as yet undeveloped Lakeview area rather than the more prestigious "Cattlemen's Row" (located in the Rainsford Historic District). Frewen was also ruined by the 1886-1887 winter and subsequently returned to Europe where he turned to new ventures, and with his wealthy and influential connections, he was able to resume his life of social prominence and extensive worldwide travels and to pursue a political career. Lakeview's other pioneer structure was constructed in 1879 and served as the stables for Cheyenne's horse-drawn trolley.

After the heyday of the cattle barons and the Black Hills stage coaches, Cheyenne began to rely on the strong underlying economy provided by the Union Pacific, state government, the military, and local farmers and ranchers. The architectural development of Lakeview is largely associated with this post-pioneer phase of Cheyenne's history, when growth was slow and steady. During the 1890s, much of the residential development occurred just east of the commercial district, but historic maps reveal two clusters of Lakeview houses dating to the mid-1890s. These early Lakeview residents represented the occupations typical of the district for decades to come. Of the eighteen houses constructed before 1894, eight were occupied by Union Pacific employees — engineers, foremen, master machinists. Residents in the remaining houses included postal employees, local government officials, and ranchers.

By 1900, there were a fair number of houses in the western portion of Lakeview. These houses were occupied mostly by railroad employees. For example, the four similar one and one-half story wood frame houses in the 200-block of East 25th Street, all built in 1901, were occupied by railroad employees from the time of construction. C.I. Smith, Railway Postal Clerk, lived at 208 East 25th in 1902, then at 212 East 25th in 1905. The first occupant of 218 East 25th was J.F. Fink, Union Pacific foreman; the first occupant of 222 East 25th was Epwood Mansee, Union Pacific conductor. These residents and their homes are representative of the Lakeview District during this time period.

Most of the houses in Lakeview were constructed in the first two decades of the 1900s, a period of major expansion and reconstruction for the Union Pacific. In the first years of this period, the traditions of the nineteenth century were continued, but the Classic Cottage and American Foursquare became increasingly popular, and by the late 1910s the Bungalow was gaining favor. Occupancy trends, however, continued with a predominance of Union Pacific employees. Interestingly, employees of the Union Pacific rather than of the Colorado and Southern resided in Lakeview, and these tended to be engineers, foremen, and conductors rather than laborers. It seemed to be the custom for railroad employees to turn their homes over to other railroad employees. Other Lakeview residents were small business owners or clerks at downtown businesses. But railroad employees were by far the most numerous during Lakeview's period of significance. Thus, the development of Lakeview was to a great extent tied to the fortunes of the Union Pacific in Cheyenne.

The last major period of construction in Lakeview took place in the 1920s and 1930s. Growth in the 1920s was spurred by the development of air travel to Cheyenne. The municipal airfield, located just north of the district, was one of the best supplied and equipped in the country at that time, and the city anticipated that Cheyenne would become a major transportation terminal. These hopes were eclipsed by the emergence of Denver to the south. However, 1920-1939 were largely Depression years for Wyoming, and construction proceeded at a slower rate and with little embellishment. While many of the houses continued to be inhabited by railroad workers, homeowners were also likely to be state government employees, clerks, and engineers. The residents of Lakeview clearly represented Cheyenne's major employers over the years — the Union Pacific and state government.